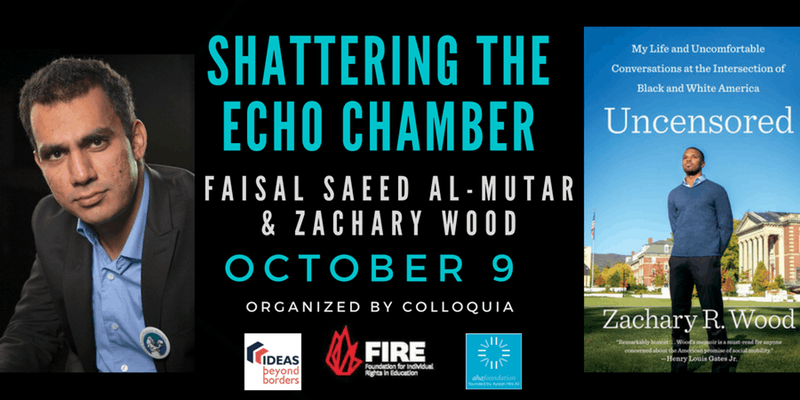 Description: Join us in bringing Faisal Saeed Al-Mutar in conversation with Zachary Wood to discuss topics such as censorship, civil discourse, and foreign policy. The talk will be followed by an audience Q&A.

Doors open at 7pm. Refreshments will be served. The talk will begin around 7:20pm.

Non-Columbia students or faculty must reserve online by OCT 3 so we have time to generate a guest list for campus security.

Al-Mutar is an Iraqi-born award-winning counter extremism advocate, satirist, speaker and writer. He was admitted in to the United States as a refugee in 2013. He founded the non-profit organization Ideas Beyond Borders, which counters extremism at its root through education, translation, and the spreading of good ideas. In 2016 he received the gold President’s Volunteer Service Award from President Barack Obama for his volunteer service.

Wood is a columnist and assistant opinion editor at the Guardian and author of “Uncensored”. During his time at Williams College, he was the head of a student group called Uncomfortable Learning. The group advocated engaging in conversations with people they disagreed with. The school sparked national controversy for inviting speakers such as Charles Murray and John Derbyshire. As a rising senior, Wood testified before Senate in defense of such conversations at a hearing titled “Free Speech 101: The Assault on the First Amendment on College Campuses.” In June 2018, he released a memoir titled “Uncensored: My Life and Uncomfortable Conversations at the Intersection of Black and White America”. The book will be given out complimentary to the first 20 attendees of this event.

In @Ayaan's newest article, she explains the threat of Islamism and how French President Emmanuel Macron has gone about combatting the radical ideology in his country. Read here: buff.ly/3dvDAly

This is nothing short of appalling. There are communities out there that still believe FGM is acceptable. We must continue to fight to show them that it won't be tolerated. theahafoundation.org/kenyan-e…

Connecticut is the only state bordering New York that doesn't have an anti-FGM law in place. Sign this petition today and help protect women and girls in the state of Connecticut! buff.ly/3kvh2E4 pic.twitter.com/2uTBkQKDbH

In several U.S. states, marriage is a defense to statutory rape. This is commonly known as a "marry your rapist" loophole. It's just one more reason we need to #EndChildMarriage. #18NoExceptions #MarryYourRapist @UN_Women pic.twitter.com/3EwhSAzkw4

The American College of Pediatricians stands with us in our call for a Federal law banning FGM. twitter.com/ACPeds/status/…