The 11 States That Risk Becoming Destinations for FGM 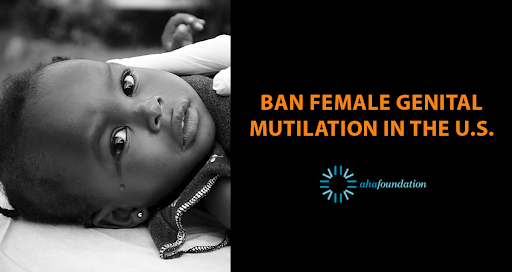 The recently reestablished federal law against FGM does not guarantee protection for girls and women at risk in states that still lack a state ban against this heinous practice.

Although female genital mutilation (FGM) is internationally recognized as a human rights violation, 11 states, and the District of Columbia, still do not have laws protecting girls from this heinous practice within the United States. These states are at risk of becoming trafficking destinations for FGM despite a recently reestablished federal FGM ban.

The federal bill doesn’t guarantee protection for women and girls at risk for FGM in states that do not have their own bill outlawing the practice. The best way to ensure the safety of women and girls is to back up the federal ban with comprehensive state legislation.

We are calling on our supporters in these remaining states to demand that their legislators prioritize women and girls in their state by banning this practice. Legislators tell us that hearing from their constituents matters. They want to hear from you!

Look below to see if your state lacks an anti-FGM law, and why their efforts to criminalize FGM are failing. Find sample letter templates and your legislators below if you live in one of the states who lack anti-FGM laws. Take five minutes and speak up for the girls who are voiceless.

Alabama - Dead in the Senate 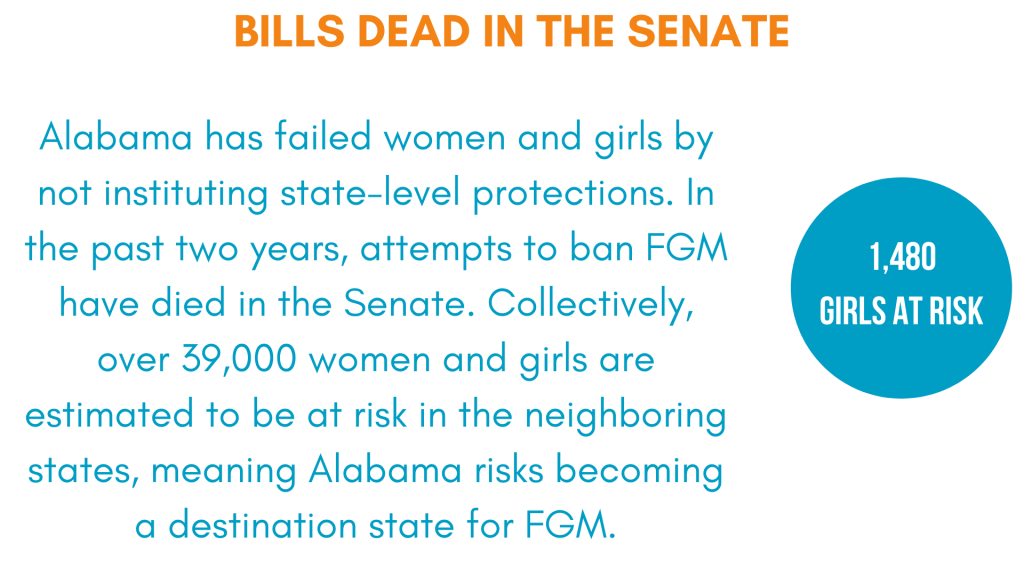 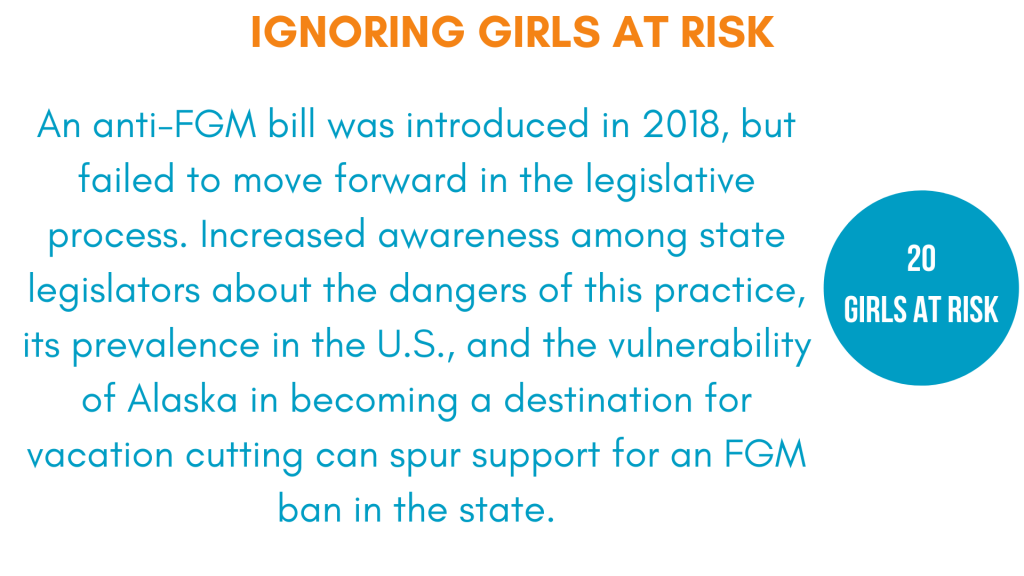 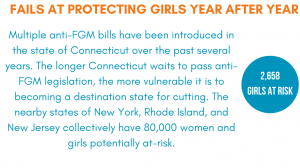 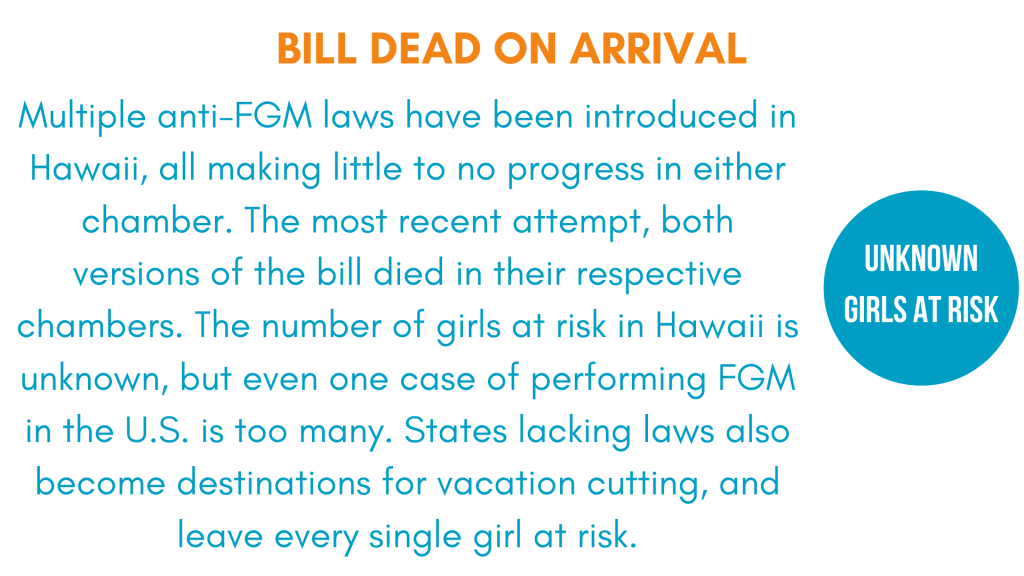 Indiana - No Interest in Protecting Girls from Genital Mutilation 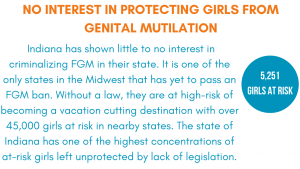 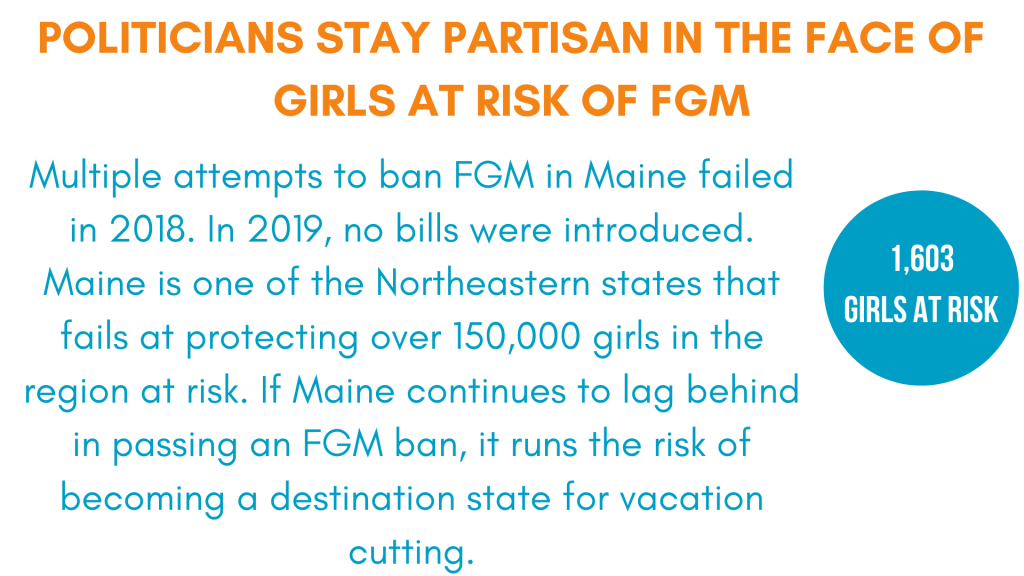 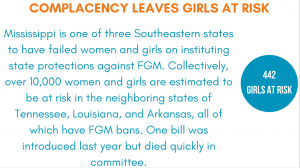 Montana - Lack of Awareness Leads to Lack of Action 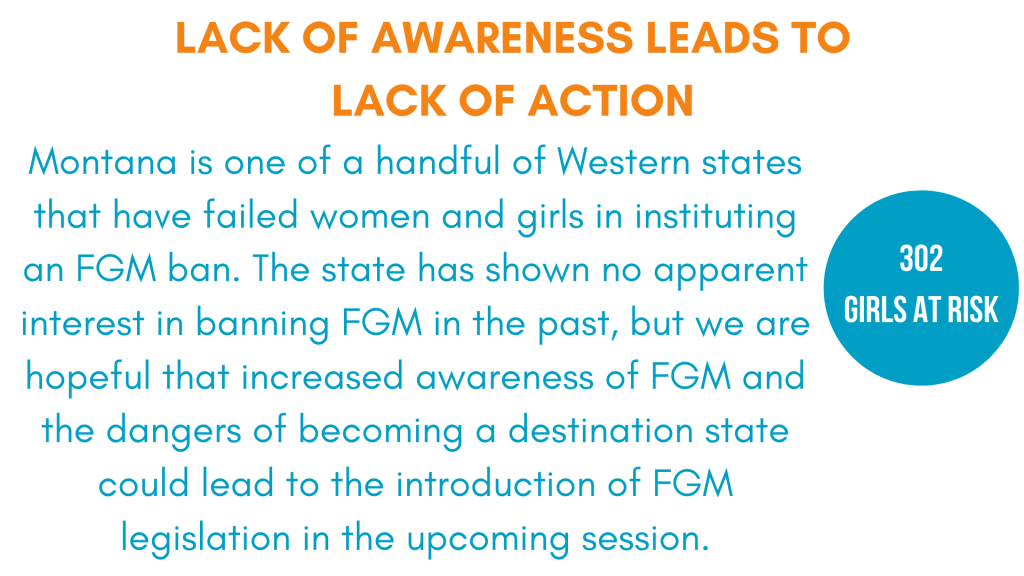 Nebraska - Inaction of Legislators is Unacceptable 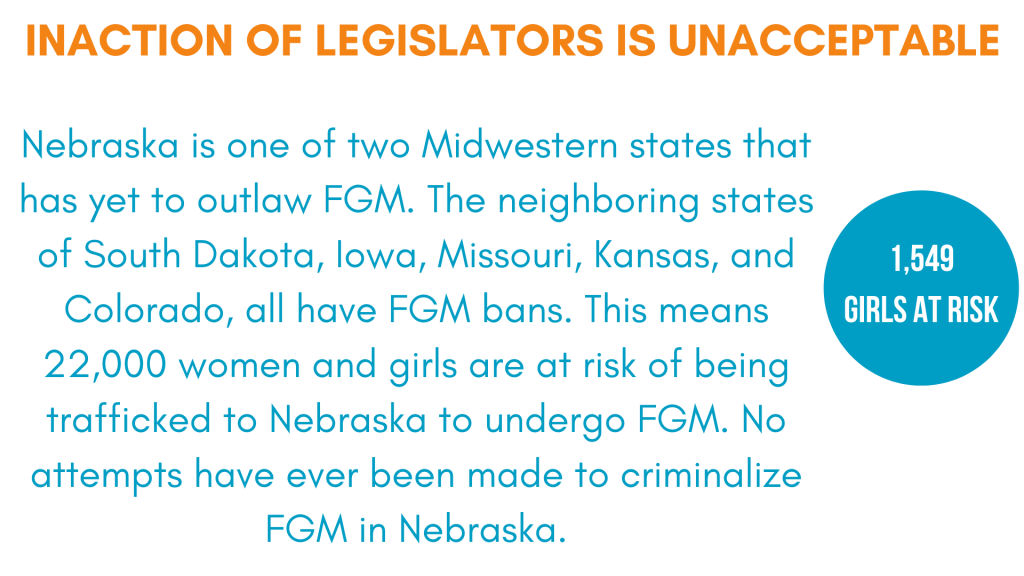 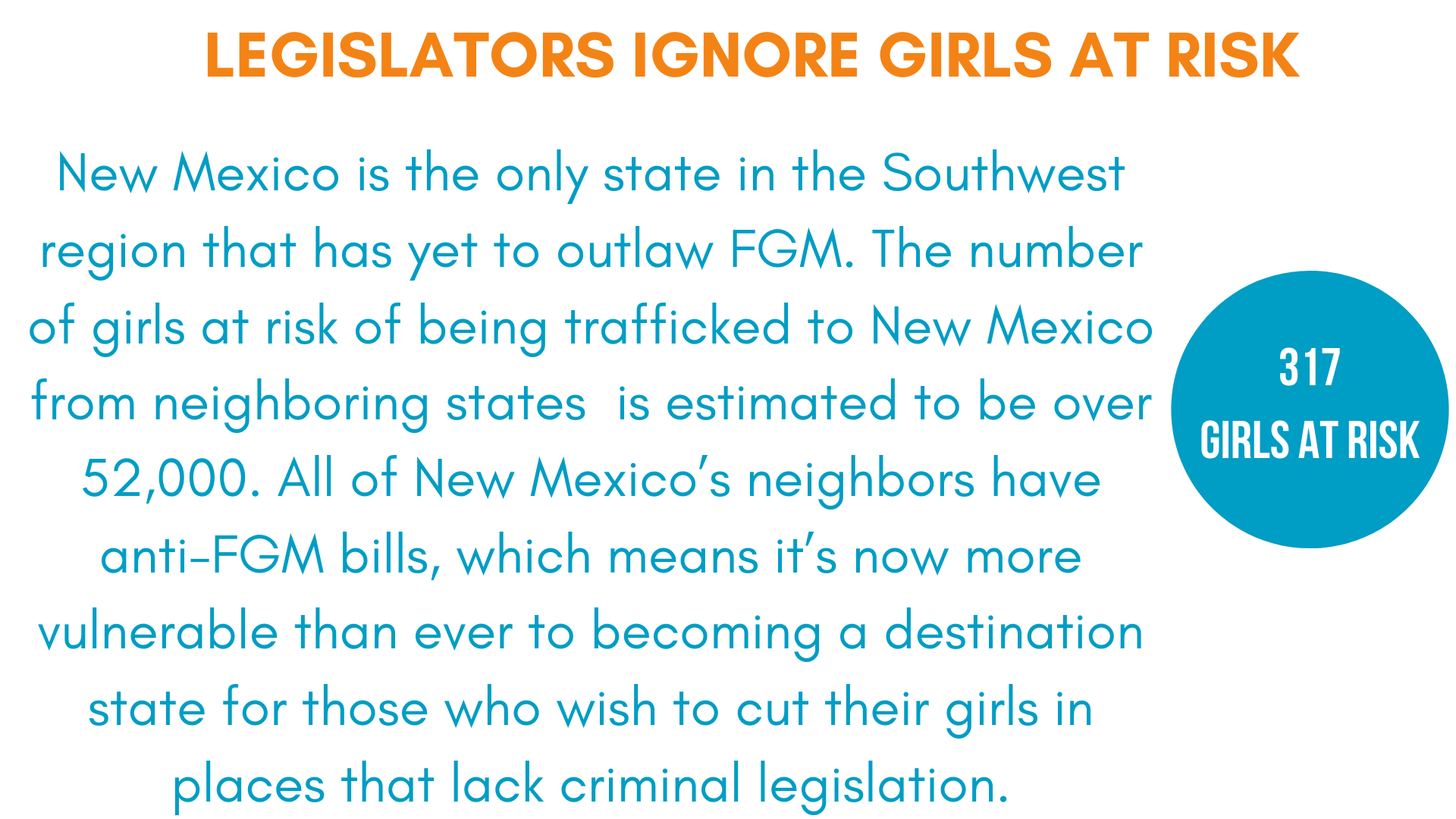 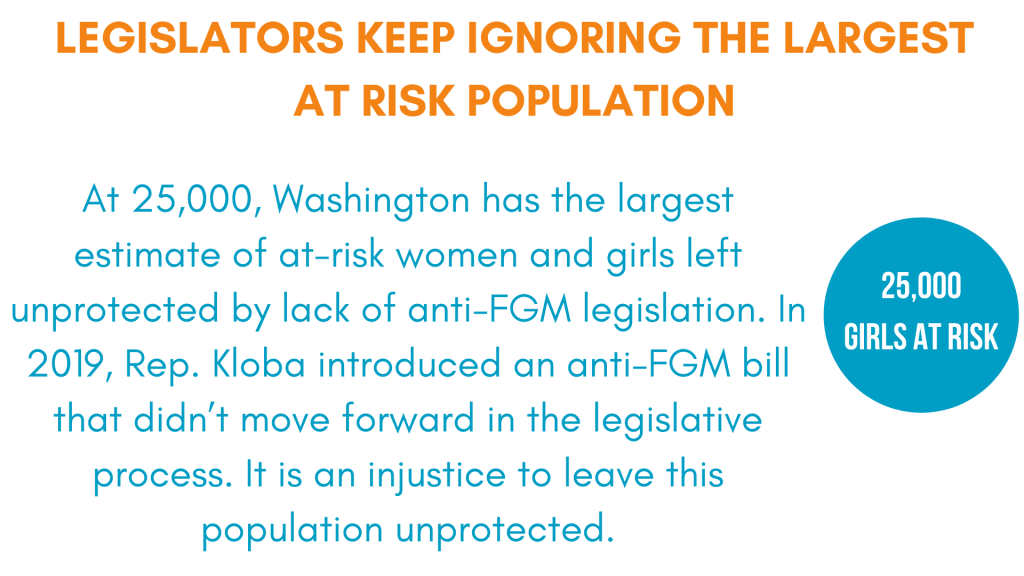 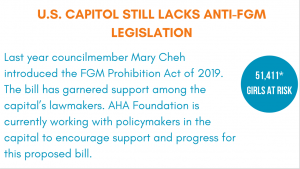 *Estimate is for the Washington-Arlington-Alexandria metropolitan statistical area. Arlington and Alexandria located in the bordering state of Virginia.

The numbers of girls at-risk in each state have been calculated by the Population Reference Bureau. However, based on their methodology, we believe these numbers underestimate the true number of girls at risk, and believe that the actuall number is much higher. Please reach out to your legislators if you live in one of these areas, and help garner support. We must put a law in place in every state.

Other blogs from AHA Foundation: