University of Texas, Austin – Books Not Bombs: Translating the Western Canon for the Islamic World 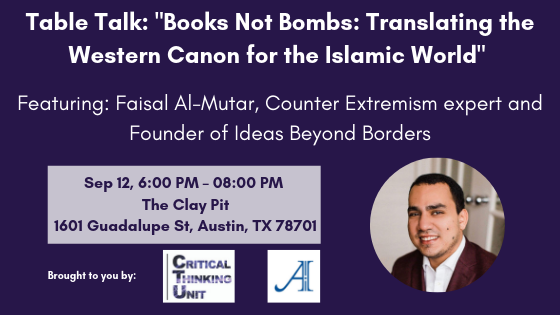 Description: Raised in Baghdad, Faisal Saeed Al Mutar experienced the oppression of extremism and authoritarian regimes firsthand. He survived the Iraq Civil War, the murder of his brother, and several kidnapping attempts before becoming a refugee in the United States in 2013.

​ Faisal founded the non-profit organization Ideas Beyond Borders so that other Arab youth wouldn’t have to suffer in the way he and his family did. His mission: to encourage free speech, critical thinking, and humanism by making the Western canon accessible across the region.
A practitioner of counter-extremism on an international scale, he’s spoken at conferences and campuses across the globe about his work for the government and as a private citizen to combat extremism. He has founded the organization Ideas Beyond Borders to prevent extremism by empowering people across the globe with access to new ideas and fresh perspectives.
“The secret to a peaceful Middle East can be found in books, not bombs,” insists Faisal. Join us for dinner and conversation about Faisal’s journey, his work in the Middle East, and how Ideas Beyond Borders is igniting a movement of youth committed to a better future for the region.

@NYGovCuomo Want to let @NYGovCuomo how upset you are? Write to him at this link, courtesy of @UnchainedAtLast actionnetwork.org/letters/tel…

Your weekly reminder that @NYGovCuomo has been sent a bill that could OUTLAW CHILD MARRIAGE in New York and he has not signed it yet. This is a no-brainer decision—Give girls the protection they deserve.