After facing repeated attempts, some of which were successful, to ban her from speaking on U.S. college campuses, our Founder Ayaan Hirsi Ali spoke at only a handful of college campuses in recent years. Ayaan spoke most recently on October 1, 2019 at the Pepperdine University School of Public Policy, an event made possible by generous support from AHA Foundation donors. 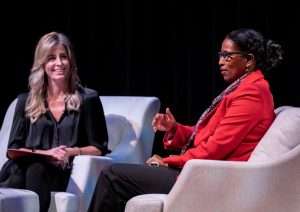 At the event, aptly titled “The (Transformative) Power of Women”, Ayaan discussed the importance of education for women and girls and the positive impact this has on their prosperity, happiness, and health. She experienced firsthand how education can make the difference between a chance at prosperity and a life in poverty.

Ayaan shared her experience of growing up in a strict, fundamentalist Muslim household in impoverished communities in Somalia, Kenya and Ethiopia. Even though her family was abandoned by her father, and she was raised in a religiously and culturally repressive family, she received an education—a rare commodity for women and girls in her communities. Because of her father’s insistence, she was allowed to go to school and receive an education. Ayaan also avoided being married off in her early teens because of her father’s absence (which was common for girls whose fathers were around to arrange their marriages).

Going to school instead of being married off at an early age were hidden blessings in otherwise adverse life circumstances. Ayaan pointed out that when girls are educated, the benefits are exponential. They surpass the individual woman and trickle down to her children and family as a whole.

Voicing appreciation for the safeguards offered by the West, Ayaan shared a time when they saved her life. After she rejected her attempted forced marriage and escaped to the Netherlands, a distant cousin found her and attempted to take her to Canada, where the marriage would take place. But thanks to the Dutch laws and local law enforcement, she was prevented from being married off against her will and her freedom was secured. 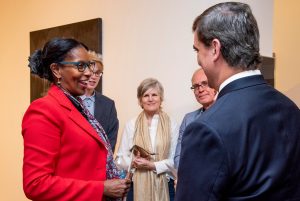 Ayaan reminded the audience that, while the education of girls is important, we can’t effectively better the lives of women and girls while ignoring the cultural and religious tenets that hold them back in certain societies. Women and girls will never make progress and can’t be uplifted if the oppressive problems that pervade their cultures remain unaddressed.

Ayaan went on to assert that those who believe in Enlightenment values would be making a big mistake by apologizing for the things that we believe in and seek to uphold—those very values that gave her freedom and provided her sanctuary, and relief in her young adult life. Instead, we need to defend those values — such as the equality of women and liberty for all people — and challenge the cultures that oppress women and girls.

Ayaan stressed the need to overcome fears and reservations when protecting and promoting our most cherished values. She underlined the need to maintain civility and composure in the face of our critics and aggressors. Anger and revenge will do little in the way of furthering our goals. Rather, we need to work to change those cultures and communities deemed hostile to our ideals and make changes from within.

Want to help protect women and girls from FGM in the U.S.? Join our campaign here.