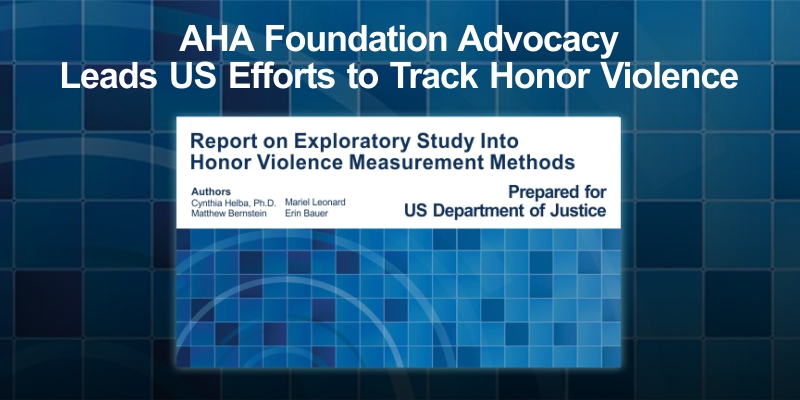 Executive Director of the AHA Foundation, speaks about the Westat report on honor violence

I distinctly remember the first time I heard about “honor” killings. It was 2006 and I had just moved to Jerusalem when three women were murdered and their bodies dumped on the streets of Gaza. Two of the women were twins tortured and killed by their brother who accused them of promiscuity, and the third woman, who was pregnant, was murdered because she was supposedly having an extramarital affair. The same year Human Rights Watch released a report about violence against Palestinian women and girls that included honor violence. It was in this report that I read stories such as that of a Christian girl who plunged to her death after her father pushed her out of a window because she wanted to marry a Muslim boy, and a son who stabbed his mother to death because he found her behavior shameful.

The more I learn about honor violence and abuse, the more I find the concept of a woman or girl being accused of bringing shame to their family or honor crimes being sanctioned by communities or the lack of remorse on the part of a violent perpetrator incomprehensible. With a career in international development spanning almost twenty years, including working on programs to address sexual and gender based violence, before joining the AHA Foundation I never thought about honor violence in the U.S. Surely our laws protect people from honor based violence, female genital mutilation, child and forced marriage? Surely our society believes in equality for women and girls and is committed to protecting their rights? Yet, we see that women and girls often end up facing the same harmful traditional practices even when they live in the U.S. This is simply not acceptable.

In February 2012, the AHA Foundation provided draft language and a letter of support to Representative Frank Wolf for the Appropriations Bill that would compel the U.S. government to begin tracking honor violence. Once the bill was passed, the Department of Justice (DOJ) was required to begin collecting data on honor violence. As a result, in 2013, the Commerce-Justice-Science Appropriations bill directed the DOJ’s Office on Violence Against Women and the National Institute of Justice to determine the prevalence of honor violence and recommend best practices for law enforcement and service providers for prevention. When Westat was commissioned by the DOJ to write a report on the prevalence of honor violence in the U.S., the AHA Foundation was consulted during the drafting of the report. Our staff provided background information about honor violence and our programs, and we shared the studies we funded on honor killing and forced marriage carried out by the John Jay College of Criminal Justice.

The Westat report on honor violence prepared for the Department of Justice doesn’t necessarily tell us anything we don’t know. The report confirms that frontline service providers, educators and law enforcement may not recognize honor violence and abuse. We know that data is not being collected systematically to better understand the prevalence of the problem in the U.S. But the value of the report is that finally in the U.S. there is recognition that honor violence is taking place in our country. This is a first, critical step to taking action to prevent honor violence.