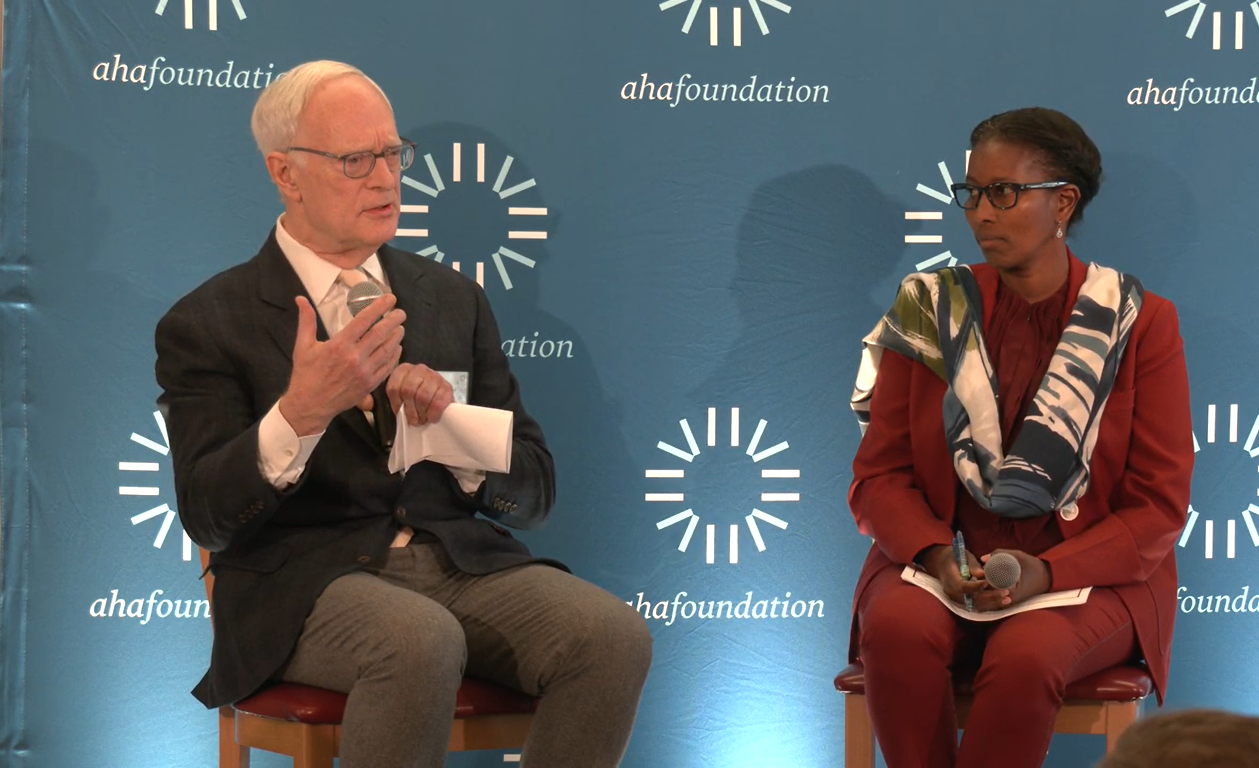 How I became friends with Ayaan Hirsi Ali

I was one of the first of millions of Americans to encounter Ayaan Hirsi Ali and to be greatly moved by her bravery and affected by her thinking and writing.

I met Ayaan in 2005 when I was president of the American Enterprise Institute (AEI) and she was a member of the Dutch Parliament. AEI was a frequent stop for foreign officials visiting Washington, D.C., but I knew in advance that Ayaan’s visit would be special.

I had heard reports of her Muslim girlhood in Somalia and Saudi Arabia, her escape to the Netherlands en route to an arranged marriage to a stranger, and her astounding rise in Dutch society from menial refugee to prominent—and highly controversial—intellectual, politician, and champion of women’s rights. Cynthia Schneider, an American historian of Dutch art who had served as U.S. ambassador to the Netherlands in the Clinton administration, urged me to roll out the red carpet for the young parliamentarian and convene a discussion seminar with AEI scholars.

“During her visit [to the American Enterprise Institute in 2005], Ayaan was cheerful and captivating and then, the moment she launched into her seminar presentation, intense and challenging.”

During her visit, Ayaan was cheerful and captivating and then, the moment she launched into her seminar presentation, intense and disruptive. She told us that Americans still hadn’t grasped the full meaning of 9/11. It was more than a terrorist attack demanding a military response. It was a salvo in a concerted assault on Western Civilization, demanding political and cultural responses.

The terrorists, she explained, were not fringe lunatics but serious exponents of a school of Islam with substantial support in the teachings of the Koran, as many Muslims recognized. Central tenets of our Enlightenment heritage—free speech, religious pluralism, and women’s rights and social status—were under an attack that few Americans comprehended.

Ayaan’s presentation was unsettling to many of my colleagues. But think tanks like AEI are in the debate business, and a vigorous discussion ensued—where she more than held her ground. She and I resolved to stay in touch. She told me she was considering leaving legislative politics to pursue a career of scholarship, writing, and intellectual activism. She wanted to deepen the ideas ventilated at our seminar and disseminate them widely, on her own terms. I gave her my views of the pluses and minuses of AEI, the Brookings Institution, Harvard’s Kennedy School, Stanford’s Hoover Institution, and other august American venues.

Later, in 2006, Ayaan became disenchanted with Dutch politics, including an irresponsible temporary revocation of her citizenship that caused the government to fall. She resigned her membership in Parliament, accepted an appointment at AEI, and relocated to the United States. She worried that U.S. immigration authorities might regard her as politically problematic and too-hot-to-handle—but top officials of the George W. Bush administration gave her a warm public welcome to the United States. Beginning with a standard Green Card, she became an American citizen in 2013.

That was the beginning of a momentous public career that has included several widely celebrated books (Infidel in 2007, Nomad in 2010, Heretic in 2015, Prey in 2021); hundreds of essays in leading publications; innumerable lectures and debates at colleges, universities, and civic conferences throughout the United States, Europe, and beyond; and frequent appearances on television and internet programs, including, beginning last year, her own podcast series. 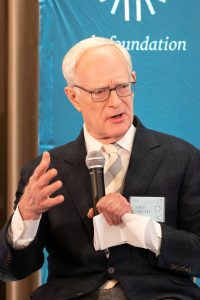 The narratives and arguments of Ayaan’s interventions are gripping, deep, and variegated and are often attuned to immediate events. But in retrospect they have an overarching theme that has proved to be highly prescient, indeed prophetic. It is that the principles of classical liberalism that propelled the rise of Western Civilization—freedom, equality, tolerance, and pluralism—contain an important blind spot.

The principles are assumed to be “universal,” such that everyone in a political community accepts and follows them. But what if a movement or ideology has illiberal, totalitarian ambitions? And what if it wraps itself in the mantle of “pluralism”—appealing to liberal “tolerance” of its views and even demanding suppression of critical inquiry that its members might find offensive?

Ayaan’s challenge to the West was to recognize that political Islamism was employing liberal precepts tactically, as a cover for illiberal purposes and practices. Islam is a religion of peace, it was said, and its adherents are an oppressed minority—therefore its doctrines (unlike those of Christianity and Judaism) may not be questioned or criticized, let alone parodied. If an Iranian woman is stoned to death for adultery, if immigrant men go on a violent rampage in a European city or on an American military base, if imams in Muslim communities insist that practices such as honor violence and female genital mutilation be governed by Sharia rather than Western law—well, that’s cultural diversity for you, and good liberals should recognize that their own cultures aren’t exactly perfect.

Nor, the political Islamists claimed, should Muslim reform be open to public debate. If someone proposes that Islam could gain religious integrity and new adherents through a Reformation of its own—as Muslim apostate Ayaan does in Heretic, and as many devout Muslim reformers are now doing on their own terms—those persons should be shunned, cancelled, or worse.

It is no answer to Ayaan’s arguments to say that political Islamism has no realistic prospect of displacing liberal Western institutions, so best to leave it alone to burn itself out. To the contrary, the appearance of insular immigrant communities where girls and women are treated as chattel is a clear-and-present assault on Western institutions of liberty, equality, and the rule of law. In Europe, the growth of such communities is already undermining the freedom and security of all women, as Ayaan documents in Prey.

“Ayaan was also prophetic. Her essential insight—that Western liberalism had become blind to assaults on its own principles—was a product of her experience as a fervent Muslim fundamentalist who had grown into a brilliant student of Enlightenment philosophy.”

I said that Ayaan was also prophetic. Her essential insight—that Western liberalism had become blind to assaults on its own principles—was a product of her experience as a fervent Muslim fundamentalist who had grown into a brilliant student of Enlightenment philosophy. But we now know that that insight has much broader ramifications.

In recent years, a strange new ideology, commonly called “woke progressivism,” has swept American institutions—universities and schools, business and finance, media and culture, government and even the military. Central to this ideology are the doctrines of “white supremacy” and “systemic racism,” which hold that African Americans (and certain other minorities) are pitiful, helpless victims of embedded social oppression, with little or no agency of their own. Other prominent woke canons are those of sexual fluidity and transgenderism, elite superiority and fitness to rule over the common man and woman, and the need to police and sanction dissent from the new orthodoxy.

Ayaan has leapt energetically, and with tremendous insight, into all of these controversies. This has not been a distraction from, but rather a continuation of, her earlier calling. She immediately recognized woke ideology as a homegrown version of Islamist ideology—appealing to liberal sympathies, and fomenting moral confusion, in order to justify actions that subvert liberalism to its core. A leading indicator of this dynamic is that wokeism has proceeded furthest at our universities—previously our preeminent institutions of liberalism and free inquiry.

The march of wokeism, like the march of Islamism, is more than an intellectual movement. It has already claimed many innocent victims, from university professors to stand-up comedians. And its victims include its supposed beneficiaries. Many mayors, police officials, and public prosecutors have responded to the “Black Lives Matter” and “Defund the Police” movements by handcuffing police protection in many neighborhoods and effectively decriminalizing looting, shoplifting, and similar offenses. These steps, taken in the name of “social justice,” have produced a surge in urban crime and killing that has disproportionately afflicted black citizens. Similarly, the aggressive promotion of sex-change surgery on unwitting children has left many girls (and boys) permanently disfigured.

It is uncertain whether travesties such as these will lead Americans to return to their senses and recover their civilizational self-confidence. But we have great and honorable work ahead, and Ayaan will be indomitably at the forefront.

My time as Chairman of AHA Foundation’s Board of Directors

In 2007, shortly after she arrived at AEI, Ayaan determined to establish a foundation to take concrete actions on the ideas she was propagating in her writings. Along with others of her friends and colleagues, I was involved in the AHA Foundation’s formation and early years. One thing led to another, and I have chaired the AHA Board of Directors since 2013. 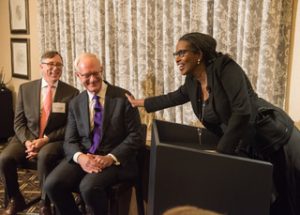 The Foundation has become an outstanding protector of the rights of Muslim girls and young women, through legislation, litigation, and the training of police and public attorneys. I have been particularly gratified by the help we have given to individual girls who have come to us in desperate circumstances similar to those Ayaan once endured.

We have also sponsored lectures by Ayaan and other thought-provoking speakers at colleges across the country, established lively “critical thinking” student cells on many campuses, and held international workshops for leading Muslim reformers.

All of this has been supported by a wonderful and thoroughly bipartisan cadre of donors, ranging from business tycoons to programmatic foundations to individuals who have read Ayaan’s books and visited the AHA Foundation website.

“Protecting the rights and status of women and girls, promoting critical thinking among college students, and defending robust freedom of speech however inconvenient to the powers-that-be, have all become larger problems for Western society that we realized just a few years ago.”

The Foundation’s work is now expanding in league with Ayaan’s new engagements described above. This will be, for us as for her, a natural extension of earlier, continuing efforts. Protecting the rights and status of women and girls, promoting critical thinking among college students, and defending robust freedom of speech however inconvenient to the powers-that-be, have all become larger problems for Western society that we realized just a few years ago.

With this transition well underway, I will be stepping aside as Board Chairman this month and handing the gavel to the estimable Rosa Zeegers. Rosa is a long-time friend and compatriot of Ayaan’s going back to their days together in the Netherlands. She is a businesswoman, adept at finance and organization and at keeping meetings collegial, deliberative, and results-oriented, and has served on our Board as Chair of our Global Advisory Council. She guided the creation of the Board’s first strategic plan many years ago, and reprised that effort earlier this year in settling on additional, financially sustainable programs that will complement our established work.

So I can say with more than the obligatory modesty that leadership of the AHA Foundation’s Board of Directors will be in better hands than ever. But I am delighted to report that Rosa, Ayaan, and the other directors have invited me to remain on the Board, where I can continue to be part of this exemplary organization.