AHA Foundation was first to expose immigration loophole that enables child marriage in the U.S.

While responding to requests for help from girls at risk and survivors of forced and child marriage over the years, our staff identified a federal loophole that has been a driver of countless child marriages in the U.S. And the cause of these child marriages is completely preventable.

Currently, it is legal for a U.S. citizen child to sponsor a visa for a foreign-born spouse or fiancé(e), or for a U.S. citizen to sponsor a child to come to the U.S. for the purpose of marriage. In a situation of forced marriage, a family may use this loophole to promise American citizenship in exchange for a marital agreement as part of the dowry the new husband receives. Similarly, a child may also be brought against her will to the U.S. to be married. This federal loophole in the U.S. immigration system has enabled child marriages for children as young as 14.

Understanding the danger this posed to girls, we were spurred to action. 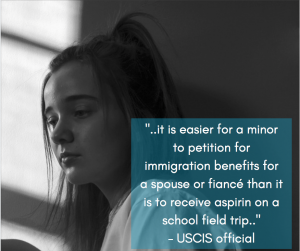 A year ago, we alerted the Senate Homeland Security and Governmental Affairs Committee that children are being married in the U.S. because of this visa loophole. We had already submitted a Freedom of Information Act request asking that the number of children who have been trapped into marriages through this loophole be researched and released, but had yet to receive a response.

We also called for action for the loophole to be closed and exposed our findings in social media and our website. The committee sent their own request for information based on ours and was given a response more quickly. 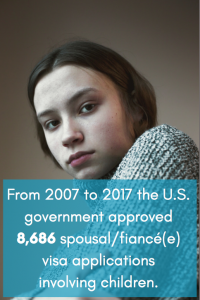 Today, the number was finally released: 8,686 spousal/fiancé(e) petitions involving children were approved from 2007 to 2017; this loophole mainly impacts girls – 95% of the approved petitions included female children. “How the U.S. Immigration System Encourages Child Marriages” was released today by the Senate Homeland Security and Governmental Affairs Committee and highlights the nature of this serious problem.

We are encouraged to see that Chairman Johnson and the Senate Homeland Security and Governmental Affairs Committee took action in a bipartisan effort to uncover the scope of this problem. The report states clearly what must happen now, “…Congress must reform the INA [The Immigration and Nationality Act] to prevent individuals from obtaining immigration benefits that facilitate child marriages.” We urge legislators to act swiftly and waste no time in passing this legislation. Children’s lives are at stake. When married early, children in the U.S. are less likely to finish school, more likely to live in poverty, and even suffer life-threatening health consequences such as diabetes, stroke, and heart attacks than their peers who do not marry until at least 18.

We are looking for sponsors to champion this legislative reform – we advocate for a bipartisan effort and fast action. This loophole must be closed immediately.

This work is only possible because of your support. Thank you for standing with us.