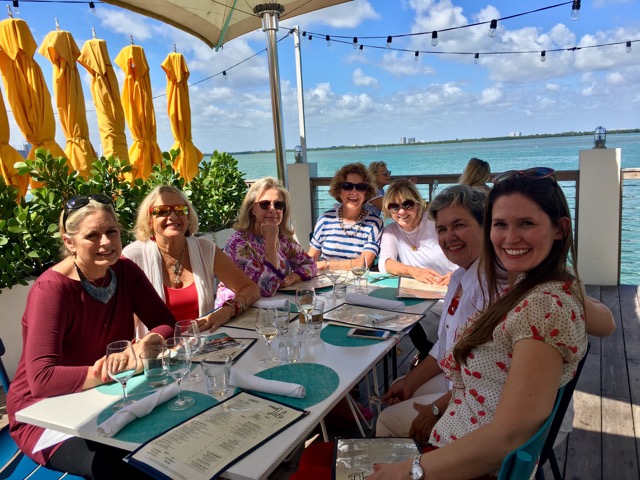 Senior Director, Amanda Parker, with Alice Smith and members of the World Wings

Recently, the Miami Herald published an article discussing the passage of child marriage legislation in both El Salvador and Guatemala. The article explains that these “new laws are part of a regional trend in Central America.” One of our determined supporters, Alicia Cubota Smith, read this and was shocked that the U.S. is not leading the cause on protecting children from child marriage and that we are actually behind many other countries in these efforts.

Ms. Smith immediately wrote a response to the Miami Herald‘s Open Mic section, calling on her state of Florida to lead the nation in establishing child marriage legislation. Like the AHA Foundation, she calls for legislators to set a minimum age of marriage at 18, with no exceptions, to protect children in Florida from the dangers of child marriage.

Thankfully, Florida legislators are working to put in place legislation to stop child marriage in their state. Representative Daisy Baez, introduced HB 71 in the Florida House of Representatives on August 21st. This bill would end marriages under 18, with no exception. Also, Florida State Senator Lizbeth Benacquisto, with Majority Leader Wilton Simpson, have introduced similar legislation with SB 140. Please visit our Advocacy Page to find resources on how to help get legislation like this passed in your state and write to your local papers, like Ms. Smith, calling on your representatives to ban child marriage.

Florida should lead the nation in ending child marriages

It was encouraging to read the Aug. 19 article “El Salvador and Guatemala ban child marriage” saying that Central American countries have outlawed marriage with minors.  However,  it is disturbing to realize that there is no U.S. state that bans marriage under the age of 18.

According to data collected by Unchained at Last, more than 16,000 children as young as 13 were married in the state of Florida between 2000 and 2015.  More than 80% were girls married to adult men.  In many cases, the age differences constituted statutory rape under Florida law

In Florida, child can marry with parental consent at the age of 16.  There is no minimum age that a judge can’t approve a marriage if she is pregnant or has a child.

American girls who marry before 19 are 50 percent less likely to finish high school and are four times less likely to graduate from college.  Additionally, girls are 31 percent more likely to live in poverty as they age.  They also face a higher risk of diabetes, cancer, heart attack, stroke, and psychiatric disorders than girls who wait to marry.

Globally, they are much more likely to face domestic violence than girls who marry later. Many child marriages are forced.

The AHA Foundation is working with Unchained at Last and the Florida Working Group to End Child Marriage to encourage legislators to put a firm minimum of 18 for the age of marriage in the state, with no exceptions.

Florida should take leadership in protecting all our children from the dangers that are unnecessarily inflicted with child marriage.

It is shameful that we Americans have not taken the lead in protecting our children from child marriages.