Amanda Parker and Angela Peabody at American University, “FGM in the U.S.: A Call to Action” 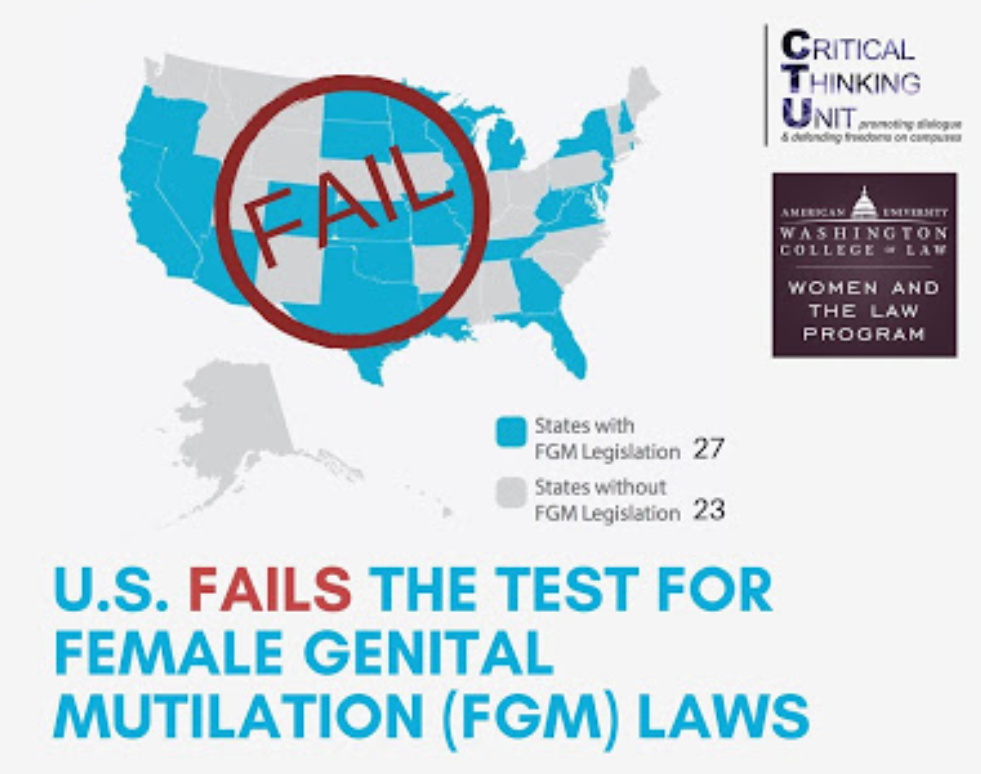 “FGM in the U.S.: A Call to Action” was a presentation on what Female Genital Mutilation (FGM) is, where it happens and the current landscape of FGM laws in the U.S. This discussion featured advocates Amanda Parker and Angela Peabody and was moderated by Critical Thinking Fellowship Fellow Adriana Buenaventura-Martinez at American University.

Amanda Parker is the Senior Director and Chief Financial Officer of the AHA Foundation. Ms. Parker oversees AHA’s women’s rights programs. She develops federal and state policy proposals to protect women and girls from harmful cultural practices, recently working with Michigan to put in place the most comprehensive anti-female genital mutilation (FGM) legislation in the country. She has facilitated trainings on honor violence, FGM, forced marriage, and child marriage for more than 600 professionals likely to encounter cases, and has supported survivors of these abuses to help them find protection and the services they need. Angela Peabody is the Executive Director and Founder of Global Woman P.E.A.C.E. Foundation, an organization founded on the principles of eliminating violence and injustices against women and girls. She holds a Bachelor’s Degree in Broadcast Journalism. After a celebrated career as a Television Broadcast Journalist in Liberia, and Special Press Secretary to the country’s first woman Minister of Agriculture, Angela immigrated to the United States, following the bloody and brutal coup d’etat in her native Liberia. She developed the passion as an advocate for women and girls against injustices and violence after her sister was beaten to death by her husband.

Ms. Parker began the with details on the federal case brought against Dr. Jumana Nagarwala and Dr. Fakhruddin Attar in Michigan. Ms. Parker provided an overview of the work done by the AHA Foundation regarding not only FGM but also other forms of women violence, such as Honor Violence and Child Marriage. She mentioned the four different types of FGM recognized by the World Health Organization (WHO), and some misconceptions regarding health benefits provided by this practice.

Regarding the U.S., Ms. Parker pointed out that the Centers for Disease Control and Prevention (CDC) estimates that around 530,000 women and girls in the U.S. are at risk of or have undergone FGM and that only 27 out of 50 states have anti-FGM legislation. In the specific cases of Virginia and Maryland, which are places of interest for the attendees of the event, Ms. Parker explained the enacted legislation, the foundation’s work to advance protective laws, and the statute of limitation for this practice while training officers likely to encounter this violation.

Similarly, Ms. Peabody spoke about the mission and goals of the Global Woman P.E.A.C.E. Foundation (GWPF): protecting women and girls from violence, specifically from FGM. GWPF provides psychological and physical therapy, as well as counseling through its local group in the D.C. metro area. In addition, GWPF sponsors Genital Restorative Surgery and legal assistance in asylum cases. Equally important, GWPF is heavily involved in the legislative process to enact anti-FGM laws in the US. They participated in drafting the recent law enacted in Virginia while working with other organization including the AHA Foundation in advancing legislation. Finally, both organizations invited the attendees to be involved in the efforts to keep women and girls safe from this horrific practice.