A multimedia storyteller from the U.S., Nesli has built her career working in Los Angeles and Istanbul. Her portfolio includes projects for VICE News, United Nations, Smuggler, National Geographic, to name a few. But working on commercial projects was not enough for Nesli. An activist at heart, Nesli strives to use her artistic talent to engage people with societal issues that are hard to face and discuss. From raising awareness about female genital mutilation, to empowering young Syrian refugees to tell their stories, Nesli makes a difference every day. Having recently returned to Istanbul, Turkey, she answered our questions about her work from a self-quarantine.

AHA Foundation: You mentioned you’re a fan of our Founder, Ayaan Hirsi Ali. When did you first start following her work?

Nesli: I first discovered Ayaan when she appeared on the Sam Harris podcast in 2014. Since then, I’ve read all her published written work, and watch her on YouTube. I also keep up with AHA Foundation through the email newsletter and social media. I highly value her opinions because I admire how fearlessly she thinks. Ayaan Hirsi Ali’s ideas have inspired me deeply.

AHA Foundation: Many of your art pieces are sending a strong message against female genital mutilation (FGM). What do you hope to accomplish with art?

Nesli: I enjoy using artistic expression to probe conversation. Even when I was 13 years old, I thought art should be used to teach and open conversation. I’ve been putting stitches on Georgia O’Keeffe vagina flowers since I was a young girl. It is astonishing that there is still a long way to go before the world takes action to achieve universal human rights. I hope my art can help teach people about these difficult subjects, and introduce the subject in a way that makes them comfortable to learn more, and speak up about.

AHA Foundation: Can you tell us a bit more about the “vagina rocks” you created?

Nesli: I gifted rocks to attendees of an event I organized called “The Future of Sex Education in Istanbul.” The aim of the gathering was to see how Turkish women felt about incorporating a sex education program as part of a community-centered initiative to empower women and young girls in Istanbul.

The idea came from the importance of creating a solid “bedrock” on which a company or initiative is built upon so that it may weather well in the long run and in times of uncertainty. The “Vagina Rocks” I made were to symbolize the importance of coming together to build that strong foundation.

“The ability to build up, break down what isn’t working, and rebuild again, many times over, is vital in life. This process may especially ring true for young learners who are preparing to enter a world and workforce very different from their grandfather’s and grandmother’s before, even perhaps different from their parents’ experience.”

Nesli next to her mural in Culver City, California.

AHA Foundation: How did you get involved serving and teaching the refugee community in Turkey? How is your professional experience impacting or shaping the work you do with refugees?

Nesli: A friend from university came to Istanbul last summer to work on her Ph.D. that involves re-writing the Syrian constitution. She introduced me to other professionals who are also doing heartfelt work out of Istanbul regarding the situation in Syria, especially with the Syrian refugees living in Turkey.

Because my background is in both Political Theory and Conflict Resolution, and Animation and Digital Arts,  I combine my skills from both sides to approach teaching in the classroom. I switch hats a lot. My most valuable professional experience comes from embracing a life process of defining and redefining who you are in this world. The ability to build up, break down what isn’t working, and rebuild again, many times over, is vital in life. This process may especially ring true for young learners who are preparing to enter a world and workforce very different from their grandfather’s and grandmother’s before, even perhaps different from their parents’ experience.

Limited—it seems— are the days of one profession, one life. Creative, environmental, and technological destruction makes fertile the opportunities for job titles lined with slashes and dashes, hyphens and hybrids. Therefore, the diversity of my experiences and an early adoption to the iterative practice of artistic creation, storytelling, and life in general, may help show them that when one is faced with something unexpected in life, making a pivot, changing your mind, rearranging or even completely revamping from scratch your idea, story, or narrative is okay. Dare I say such elasticity is a strength? Learning to refine this strength early in life may help posture young people well for the road ahead.

“This [animation] is an instance where creativity can change the world for the better.”

AHA Foundation: Art can be very therapeutic for people. You teach art to young Syrian refugees to help them express and process the harsh realities they have faced. Can you tell us about how this has affected the groups you work with? What positive changes have you seen in your students?

Nesli: I teach an animation course titled the “Art of Storytelling” to Syrian teenagers who live in Istanbul. This is an instance where creativity can change the world for the better. My class is composed of students that have gone through more than their fair share of turmoil. Some have lost loved ones and at times feel unwanted by their new environment; it’s not easy being a teenager in an unfair world. They are resilient though, and in my class students work on owning their own narrative. Being able to rebuild your life story in the midst of adversity is key to crafting a sense of purpose in life—having good mental health so that you can walk sure-footed into the future. Animation and the “Art of Storytelling” are powerful tools to synthesize these important questions.

“‘Regardless of how controversial people might believe she is, in my opinion, she [Ayaan Hirsi Ali] was and continues to be very much on the right side of justice, equality, and human rights.'”

AHA Foundation: Tell us more about the picture you drew that shows our Founder, Ayaan, with a spider web in the background—when did you create it and what inspired this art piece?

Nesli: I created and posted a series of cartoon versions of my favorite thinkers on Instagram in October of 2018. 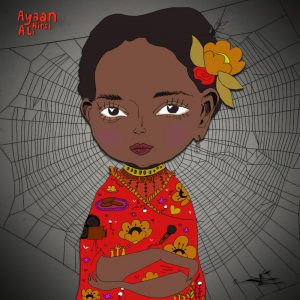 Image of Ayaan created by Nesli

Here is the description I wrote for the picture of Ayaan:

“Regardless of how controversial people might believe she is, in my opinion, she was and continues to be very much on the right side of justice, equality, and human rights. Her work and activism against FGM, honor violence, and forced marriage is particularly valuable. AHA Foundation, which she founded, does wonderful work fighting human rights abuses in the United States. In all honesty if I had a hero in this life, it would be her. On her jacket you’ll see:

“I will say this about Muslims in the U.S.—their struggle is different from Muslim women on the other side of the Atlantic.”

AHA Foundation: In the past, you have defended Ayaan from verbal attacks by your peers. From your perspective as a Turkish woman, what’s your view of Muslim women in the U.S.?

Nesli: In the past, I have defended Ayaan from some of my smartest and dearest friends in the United States who are the ones that seem to get her completely wrong. They believe her rhetoric enflames some people which can give rise to an anti-Islamic sentiment. In having these conversations, I do hope to change the minds of my peers and show them what Ayaan and AHA Foundation are really about. I will say this about Muslims in the U.S.—their struggle is different from Muslim women on the other side of the Atlantic.

“The threat of retaliation changes what kind of struggle you are able to wage.”

AHA Foundation: Would you elaborate briefly on how the struggle of Muslim women in the U.S. and on the other side of the Atlantic is different?

Nesli: For the sake of brevity, I paint in broad strokes. The object one struggles against is the point of difference. Women in the U.S. struggle to be seen by non-Muslims as equals. Women on this side of the Atlantic struggle to be seen as equals by their husband, father, family, community, law, constitution, and perhaps soon the Koran. Asserting critical opinion inside a country that values freedom of speech and the right be critical of ideas, is different from saying what you think in geography that can use unjust systems and laws to punish you for doing so. The threat of retaliation changes what kind of struggle you are able to wage.

This “side of the Atlantic” encompasses different narratives and the degree to which progress is stifled varies according to context. It is unfortunate that some comfortable, loud, no skin in the game, American Muslim women tend to overlook the grander narrative of global equal rights for all and add noise to this signal.