Amidst Torrential Rainfall and Floods, 10,000 People Show Up to Hear Ayaan Speak at MPSF Speaker Series in California

Ayaan Hirsi Ali has been a leading role model for me since I first read Infidel in 2009. Her story of endurance and survival empowered me, and ultimately laid the path that would shape my education and career. Her story led me to pursue University degrees International Politics and International Business with a focus in gender studies, it inspired me to learn Kiswahili and work in East Africa with female victims of the Rwandan Genocide, and ultimately opened up the door for me to work directly at her foundation. This was the first speech of hers I had ever attended, and to say I was excited would undoubtedly be an understatement.

Ayaan preparing for her speech backstage

Despite the torrential downpour, flooded and closed streets, and fallen trees that blocked roads across the region, myself and 10,000 other determined supporters braved the weather to join together and listen to Ayaan at the MPSF Speaker Series in California. Despite the fact that much of the audience had read her books or were familiar with her story, you could still hear quiet gasps and whispers of “wow” permeate throughout the audience as the host of the Speaker Series provided Ayaan’s introduction and impressive list of accomplishments to date.

She started off her speech by sharing about her childhood, explaining that while her life in Somalia may seem contrasting and raw to our own experiences, Ayann  in fact found her childhood quite boring, unextraordinary, and oftentimes confusing. “There was nothing extraordinary about the experience of being a female and being humiliated. I don’t remember females challenging the principles on which these degradations were founded. I just remember thinking ‘I wish I was a boy’, and wondering ‘God, why did you do this to me? Why didn’t you make me a boy?’”

“There was nothing extraordinary about the experience of being a female and being humiliated. I don’t remember females challenging the principles on which these degradations were founded.”

As Ayaan grew up, she began to more frequently question the validity and justification behind female genital mutilation, early and forced marriage and other harmful practices she and her friends experienced because of being female. She learned that you can’t get to the problem of pre-determined gender roles for men and women if you can’t understand the principles on which their roles were built. Furthermore, the complexity of the problem and the suffering it causes is that it’s not the fault of one man or one woman – but instead the fault of the culture. Ayaan  developed a burning desire to be independent, because independence was liberation.

“She developed a burning desire to be independent, because independence was liberation.” 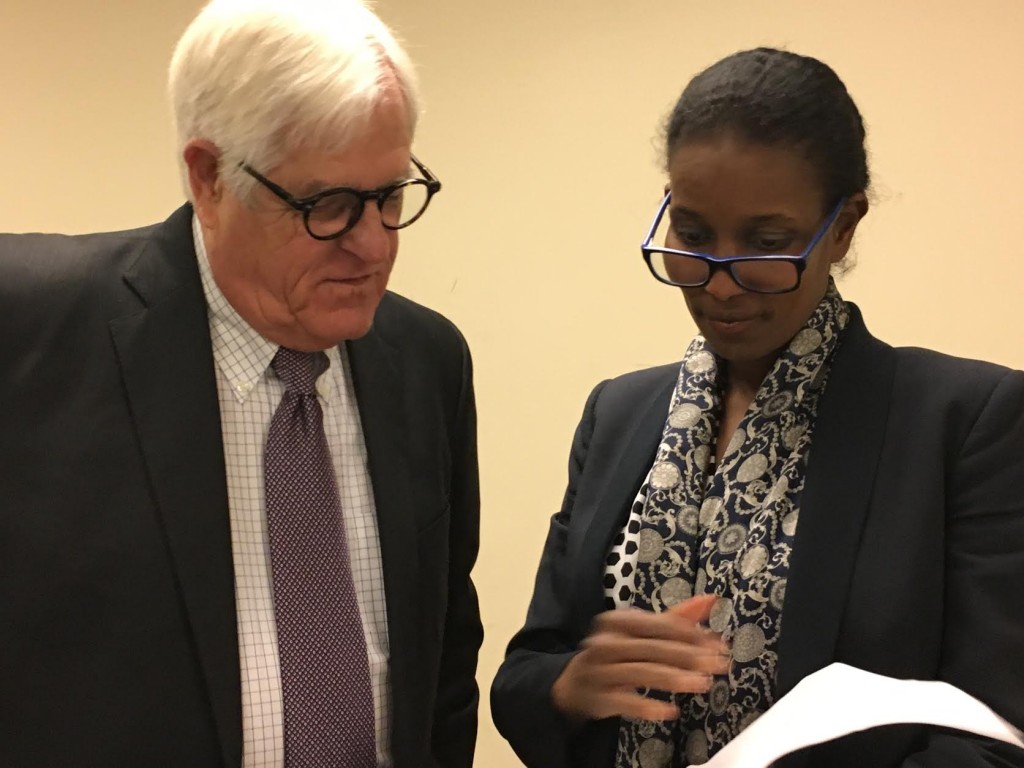 Ayaan speaking with the host of the MPSF Speaker Series

Upon reflection, Ayaan admitted she does not attribute her story of survival to perceived bravery, and in fact does not consider herself exceptionally brave. She highlights her deeply-rooted fear of spiders, fear of the dark, and – hard to believe, but true – her fear of confrontation. Ayaan  says, “I survived because I was lucky. My father insisted I go to school despite the protestations of my mother and grandmother. I was lucky to be the daughter of a man who valued educating his daughters past the age of puberty. I was lucky the Saudi government decided to deport my family, as it eventually benefited me. I was lucky to receive a Visa for Germany, which allowed me to enter Holland. I can’t take credit for the Schengen Treaty (which essentially opened borders within the EU), I was lucky.” She continued on saying, “I’m a girl who survived growing up in Africa. I don’t view other girls growing up in Africa to be girls at risk, I view them as potential survivors. I witnessed and survived a life of dependence, and so can they.”

Ayaan concludes her speech by explaining why she fights so adamantly for the rights of women and girls around the world. She explains that as a survivor, she feels an obligation to speak about the rights of women who are asking the same questions she did. She says, “The reason I speak and risk my life is ultimately I have come to understand that what I enjoyed in Holland and what I enjoy in the US – values, norms, human life in general, the constitution of liberty – that way of thinking was new to me, and that is something we cannot take for granted.”

“Values, norms, human life in general, the constitution of liberty. That way of thinking was new to me, and that is something we cannot take for granted.”

Following her speech, Ayaan answered some Q&A provided by her audience during her speech. Some questions included:

Audience Member: “Why do women who are beaten themselves beat their daughters?”

Ayaan: “Women are survivors. My grandma is the one who subjected me to FGM. She thought, ‘If I don’t do this, she will never find a husband to take care of her.’ She didn’t know the benefits of modernity and education. What she knew was ‘toughen these chicks up.’  That was her way of helping us learn to survive.”

Audience Member: “Why are liberal women in the US not more outraged by what is happening to non-Western women?”

Ayaan: “I don’t know, but I will guess. If you have never suffered, you don’t know what suffering is… My Harvard colleague wrote about the 100 million missing women and girls who were aborted or killed before the age of two. And Western women, I don’t know but I think they just can’t imagine it.”

Audience Member: “How do you feel when campuses cancel you as a speaker in fear you might offend someone?”

Ayaan: “It’s a strain on our campuses and education system that people might be protected from controversial ideas. If you go to a University to learn what to think instead of how to think, that’s a very dangerous thing.”

I was captivated by her speech and her display of unequivocal optimism in the face of adversity. As a white American female, the hardships she endured oftentimes feel impossible to fully grasp, but she never allowed her difficult past to dictate her attitude towards the future. Ayaan gracefully led us through her story with grit, humor, and a raw detail – you weren’t sure whether to laugh, cry, or both. She displayed a beautifully realistic view of the world, a determination to teach others, and a humbleness that visibly radiated in every word.