Natalie Menna is an actress and the playwright of the award-winning play Committed, a historical fiction depicting the final days of Theo Van Gogh’s life, the filmmaker who collaborated with AHA Foundation’s Founder, Ayaan Hirsi Ali, on the film Submission about the mistreatment of women in Islam. Theo Van Gogh was murdered as a response to this film. The murderer also left a note threatening that Ayaan would be next. By following Theo Van Gogh’s final two days, Committed deals with extremism and protection of free speech. We spoke to Natalie about her play and what inspired her to write it.

AHA Foundation: Tell us a bit about yourself and how you got started as a playwright.

Natalie Menna: I was trained as an actress and loved and still love acting but felt drawn to the other side of the table. I think I was always meant to be a writer, on some level. I wrote books when I was a child and was always composing dialogue and scenes in my head. At some point a few years back, writing became not a luxury but a necessity for me. Looking around at the world, I thought “this is either so damn funny or so damn tragic that I need to record a small slice of it.”

AHA Foundation: Give me a short synopsis of the play Committed and what inspired the creation of the play? What part of it is based on reality and what part is fictional? Where did you do your research for the facts and why did you create these additional characters?

Natalie Menna: Committed is a work of historical fiction about the last two days of Dutch filmmaker Theo Van Gogh’s life. When his highly controversial and vulgar documentary causes a tremendous uproar in Amsterdam and abroad, Theo spirals downward. The play explores the collision of an artist’s radical temperament and unyielding vision with modern political realities and the inevitable tragedy when uncompromising values clash. Can friendship, family, or love save Theo from his biggest threat — himself?

Theo and the events surrounding him are based on reality. The additional characters other than his son Lieuwe are fictional. My research was conducted through Dutch newspapers and journals, as well as Al Jazeera. The invention of the two fictional characters Azaad and Victoria allowed me to illuminate the essence of Theo I had read about, while still challenging his character deficiencies.

AHA Foundation: How did you first hear about Theo Van Gogh and what interested you in his story?

Natalie Menna: I read of his murder shortly after its occurrence. It was a story whose truth would not let go of me. His complicated mix of liberal and illiberal views is the stuff of a Shakespearean tragic hero.

AHA Foundation: Your depiction of Theo Van Gogh in the play makes it difficult to decide if his actions are reckless or courageous. What is your take on this?

Natalie Menna: Theo is recklessly courageous, misguided, speaking his truth with regard solely for his own art but not taking into account others’ political and religious views.

AHA Foundation: The play has a very strong message centered around the right to free speech, the need for reform in Islam, and the lack of Muslim women’s rights. Why was expressing these messages so important to you? 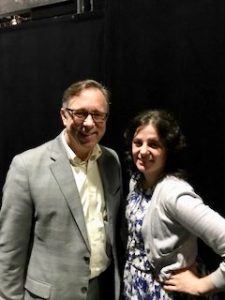 Natalie Menna: My play Committed deals with extremism, Theo’s as well as that of radical Islam. I believe extreme religious beliefs of all sorts are one of the greatest threats to civilization.

AHA Foundation: Ayaan Hirsi Ali’s name comes up often in the play, but you decided not to have her as a character for this production? Why? Do you feel that the message of the play is similar to the message in Ayaan’s books? Her earlier writing or her latest books?

Natalie Menna: Ayaan is a stronger voice offstage than if she were on. The action of the play occurs at the time of her early writings. The character of Azaad is an avatar for her later moderate views.

AHA Foundation: Did you run into any issues creating this play?

Natalie Menna: Committed is the most difficult play I have written to date. Giving voice to Theo was at times excruciating. I seriously considered abandoning the work after finishing Act One. The very next evening, resigned, I went out and saw a moving truck from The Van Gogh line outside my apartment. I took this as a sign and resumed writing. Gotta love fate.

AHA Foundation: For what audience did you write this play and what do you want people to take away from watching Committed?

Natalie Menna: I wrote this play for those of all beliefs, political, and religious. It should not answer questions, rather it should cause the audience to raise questions, not least in themselves.

AHA Foundation: What is some common feedback you receive from audiences that have viewed the play?

Natalie Menna: I was gratified that audience members found the humor in what otherwise would have been grim proceedings. Many felt it deserved viewing by a wider audience in a larger production. Audiences were uniformly impressed with the cast and script.

AHA Foundation: Committed has received numerous awards, for the acting and the overall production, what does this mean to you?

Natalie Menna: The awards that Committed won are a great encouragement. They will facilitate future productions here in New York and elsewhere.