We are proud to share with you that Ayaan Hirsi Ali, founder of the AHA Foundation, is one of three recipients of the 2015 Lantos Human Rights Prize.

Bestowed by the Lantos Foundation for Human Rights and Justice in the name of Congressman Tom Lantos, the only survivor of the Holocaust ever to serve in the United States Congress, the Lantos Human Rights Prize is awarded to people who “exemplify courage in the defense of the rights of others in their work and at a very profound level personally.”

Ayaan is in esteemed company with the other 2015 recipients: Rebiya Kadeer of International Uyghur Human Rights and Democracy Foundation, and Irshad Manji of New York University’s Wagner School of Public Service, and founder of the Moral Courage Project. 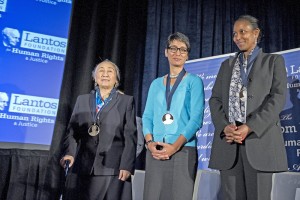 The Lantos Foundation expressed the following praise for Ayaan:

With unflinching intellect, candor, and courage, you have spoken shocking truths about treatment of women in some Islamic communities to a world that would often prefer to turn away from such realities. You have paid an enormous personal price for daring to do so. While there is little doubt that history will judge you as one of the strongest voices calling for equality, freedom, and opportunity for all Muslim women, you have had to endure death threats and hatred from your enemies and too often distancing and dithering from those who should be your allies. The calm brilliance with which you meet triumph and disaster, “treating those two imposters just the same,” is a testament to the strength of your convictions and character.

Ayaan received the award on December 10th, at a ceremony in Washington, D.C. As part of her remarks during the acceptance ceremony, Ayaan stated:

The conversation about the emancipation of women has yet to begin [in these cultures]. This reluctance [that I see] to start the conversation – it’s wrong.”

Ayaan founded the AHA Foundation to ensure all women in the US are empowered to choose their own futures and to live lives free from violence. The Lantos prize is more than an acknowledgement of Ayaan’s dedication, sacrifices and hard work – it is also a call to action, a reminder that the hard work Ayaan started must continue; it is needed more than ever in our increasingly connected world. When we work together, Ayaan, through the Foundation, can make an even bigger impact.