Books Not Bombs: Translating the Western Canon for the Islamic World at University of Texas at Austin 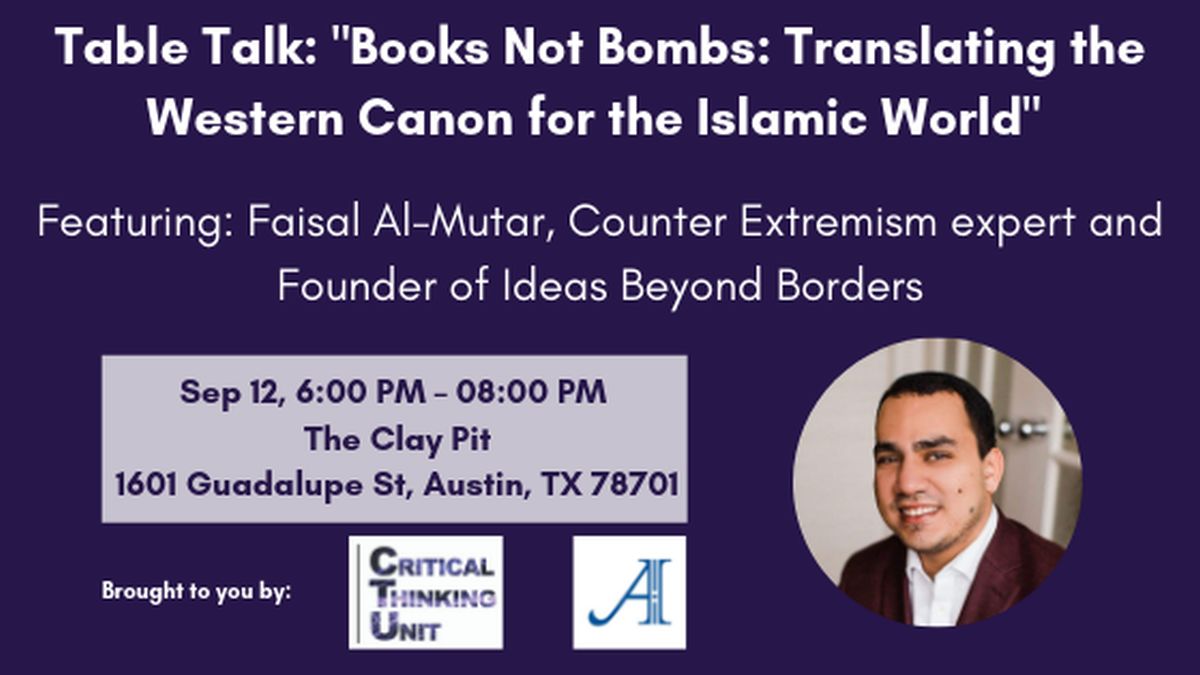 On September 12, 2019, Faisal Saeed Al-Mutar gave a lecture about the importance of secular values and knowledge at the University of Texas at Austin. With his characteristic wit, he told his tumultuous story: from growing up in Saddam’s Iraq, to fleeing amidst the civil war, to landing in the U.S. and starting his non-profit. He explained just why that non-profit, Ideas Beyond Borders, works so hard to spread enlightenment values across the world by translating them into new languages and making them freely available.

When Faisal first arrived in the United States as a refugee, he was resettled in Houston, TX. So, Faisal started the night by thanking Texas before chronicling his journey from Baghdad to the Big Apple. He reflected on how his childhood in Iraq inspired him to start Ideas Beyond Borders. Bombs, he said, will not solve the problem of radicalization: they only address its symptoms. In a closed society like Saddam’s Iraq, only English-speakers had ready access to thinkers like Locke and John Stuart Mill. “Facts that most of us take for granted,” he said, “are not available there.”

Faisal continued by saying that young people in closed societies want access to new ideas, but that they cannot access them. He aims to change that. For Faisal, knowledge is the antidote to radicalization. Bombs only address the symptoms. To counter extremist narratives, people need access to effective counter-narratives. In short, Faisal posited that liberal, Western societies cannot fix the problem of extremism with bombs. Instead, they must cut out the intellectual root of extremism with books.

Finally, When Faisal concluded his address, he spent more than an hour answering questions about the importance of liberal values and provided valuable insight into battling extremism worldwide.