Dr. Deborah Ottenheimer at Vassar College, “The Medical Side of Child Marriage and Human Trafficking” 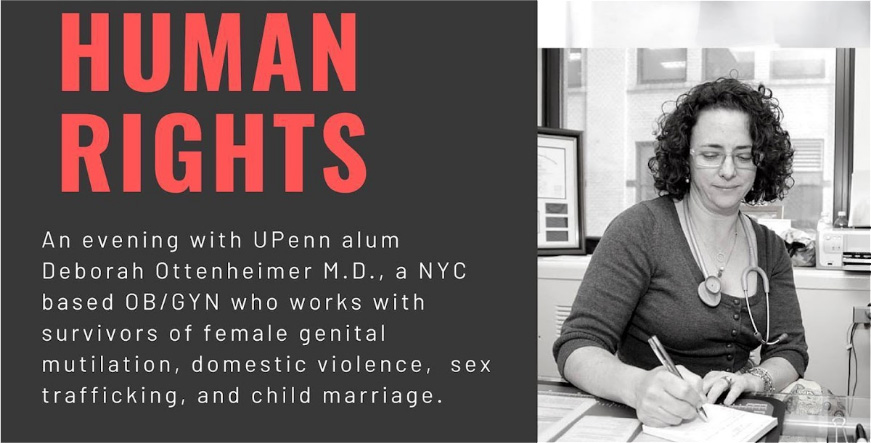 On February 26th, an audience made up of both Vassar students and Poughkeepsie community members, convened in Rockefeller Hall at Vassar College for a talk on child marriage and human trafficking.

A social worker at heart but a Medical Doctor in practice, Dr. Ottenheimer is a graduate of The University of Pennsylvania and completed her residency training at St.Lukes /Roosevelt Hospital in Manhattan. Dr. Ottenheimer spent 7 years working with adolescent girls in the South Bronx and continues to focus on adolescent and young adult health care. In addition to her private practice, Dr. Ottenheimer works as a medical volunteer in Haiti. She is also an active member of Physicians for Human Rights and faculty at Human Rights Clinic at the Icahn School of Medicine at Mount Sinai and at the Weill Cornell Center for Human Rights, aiding victims of female genital mutilation, domestic violence, and sex trafficking in their applications for asylum to the U.S. Dr. Ottenheimer lectures frequently to medical and legal professionals about human rights violations against women. Because of her experience, Dr. Ottenheimer was able to shine a fresh light onto the issues of Human Trafficking and Child Marriage.

As mentioned by Dr. Ottenheimer, the key piece of knowledge is pattern recognition. Human Trafficking and Child Marriage are just two of many violences’ that affect primarily women and girls across the world. Rather than look at issues as singular, it’s important to see violence against women as multi-dimensional. As stated by Dr. Ottenheimer, “It’s not just one story… the majority of women suffer multiple abuses from multiple perpetrators, over a vast majority of their lives.” Therefore, though someone might focus their energy on the fight against human trafficking, such as myself, we really need people to band together in the fight against all violence against all women, girls, and other persons, rather than be solely devoted to one issue.

Dr. Ottenheimer mentioned many interesting points in her lecture. She began with an introduction to human rights from a political standpoint, such as through the Universal Declaration of Human Rights. She then went into the Life Cycle of Violence Against Women from pre-birth through coerced pregnancy to claim a woman as one’s wife to the abuse of older women. Dr. Ottenheimer supplemented this with numerous maps and statistics on the physical security of women across the globe. Dr. Ottenheimer ties in her personal experience as an OB/GYN when she speaks on the health consequences of child marriage and human trafficking, concluding with a case example of a 15-year-old Female Genital Mutilation survivor.

The lecture left many students and community members alike interested in and willing to advocate for change against child marriage and human trafficking. Dr. Ottenheimer stayed and chatted with prospective medical students after the lecture, leaving many touched and highly interested in working in women’s’ health.