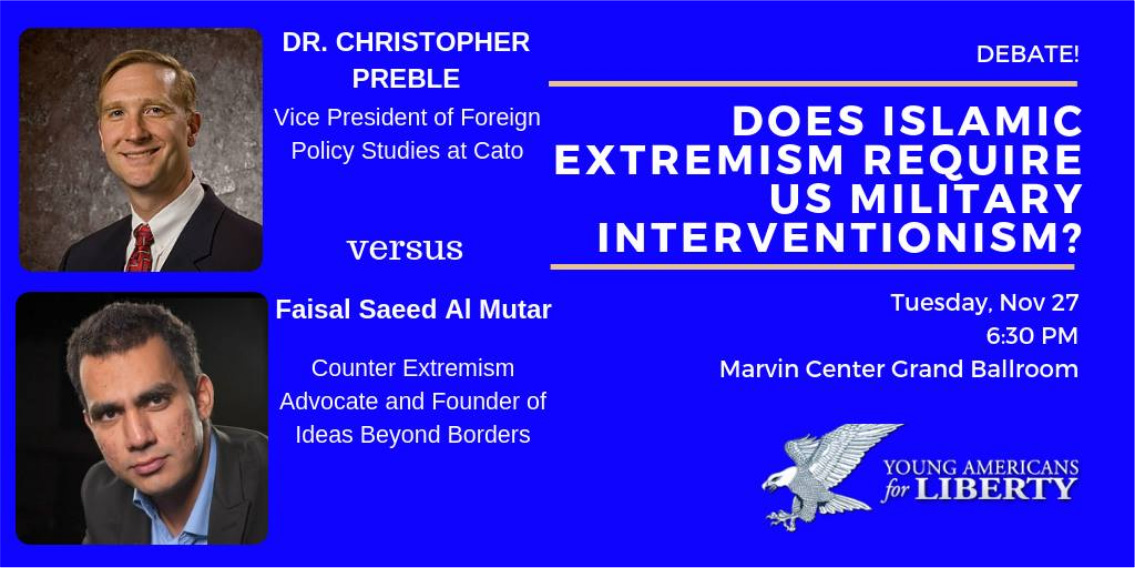 On November 27th, 2018, students and outside guests gathered at George Washington University for a debate between Faisal Saeed Al-Mutar and Christopher Preble on foreign policy. The speakers discussed the following question: Does Islamic Extremism Require US Military Intervention?

Fasial Saeed Al Mutar is an Iraqi-born satirist, human-rights activist and writer who was admitted to the United States as a refugee in 2013. He is founder of the Global Secular Humanist Movement (GSHM) and Ideas Beyond Borders (IBB), an organization whose primary goal is counter-extremism. One of the primary aims of IBB is to flood the marketplace of ideas in the Muslim world with translated texts of classical and contemporary liberal thinkers. He has previously argued that U.S. military intervention might be and has been necessary to combat the growing threat of Islamic extremism around the world.

Dr. Christopher Preble is a the Vice President of Foreign Policy Studies at the Cato Institute. He is the author of “The Power Problem: How American Military Dominance Makes Us Less Safe, Less Prosperous, and Less Free” and he coedited, with John Mueller, “A Dangerous World? Threat Perception and U.S. National Security.” As a libertarian, Dr. Preble’s stance on foreign policy is one of skepticism towards U.S. military engagement abroad. While he is not a pacifist, he identifies with the general framework of non-interventionism.

Although this was the first time the two speakers had met in public, they had a productive and insightful conversation throughout the night. During the first speaking rounds of the debate, both speakers began by highlighting the nuances of their position.

Mr. Al Mutar’s opening statement expressed that he was not there to defend the United States’ foreign policy. Rather, he believes in coalition building. He stated that the Middle East is the opposite of Las Vegas, in that “what happens in the Middle East doesn’t stay in the Middle East.” Because of the Middle East’s proximity to Europe and the Mediterranean, when there is conflict there, it doesn’t stay isolated. There is often this impression that if the United States doesn’t get involved, nothing will happen or change. When the US doesn’t fill the role as the power that intervenes, Russia, China, or even ISIS may step in to fill that role. This was seen in the case of Syria.

While Mr. Al Mutar does not agree that all U.S. intervention is good, he states that we must not forget where US intervention worked positively for both US national interests and Muslims, such as in Bosnia where millions were saved. He does not believe that military intervention is the solution to Islamic extremism. He believes in short and long term solutions, which ties in with his focus on translating books in classical liberalism and human rights because he does not believe you can “bomb your way out of it.” However, he did express that when dealing with these extremists, we are not dealing with rational actors. Sometimes, it is necessary to use force. And when left without intervention, Russia and China may intervene instead, and between those two countries and the U.S., he said, “the choice is clear.”

Dr. Christopher Preble started out with a similar sentiment. “Of course U.S. military intervention is used as a pretext to rise up against a foreign presence.” However, he followed up to say that the presence of U.S. troops in Muslim countries can be motivation for others to rise up against the U.S. Dr. Preble stated that it was important to evaluate exactly what role the US troops were going to play and what they would be doing in these areas. He stated that war can be a legitimate method of protection, however, it was important to think about when a country wages war on behalf of others, who really benefits from it? If you cannot demonstrate that the right people will benefit and the wrong people will suffer, then “the bar for military intervention is quite high.”

He believed, similarly to Mr. Al Mutar, that we must believe in the power of texts, such as the ones Mr. Al Mutar mentioned, about freedom and democracy. Dr. Preble asked how often the U.S. military drops leaflets and texts with this information, to which Faisal replied, “Never.”

Dr. Preble does not believe that the use of military intervention is never legitimate, and Mr. Al Mutar does not believe that it is always legitimate. Both have a nuanced perspective on the topic that created an interesting debate. Dr. Preble expressed that the United States often acts in it’s own best interest when it comes to military intervention, and not necessarily to the benefit of the people it claims to be helping. He stated we should always be skeptical of arguing public policy on the basis of good intentions, and it was important to take a look at actual results. Mr. Al Mutar agreed that there should be precise goals and evaluation of results: he mentioned that some parts of Iraq have benefited from US military intervention. Dr. Preble, despite being hopeful, found that hard to believe.

Overall, however, both speakers were pleasantly surprised by their agreed visions for combating extremism going forward. Both Mr. Al-Mutar and Dr. Preble agreed on the primacy of education as a solution to extremism in the Muslim world.