Faisal Saeed Al Mutar and Muhammad Frasier-Rahim at the University of North Carolina, “Countering Extremism in the Age of Polarization” 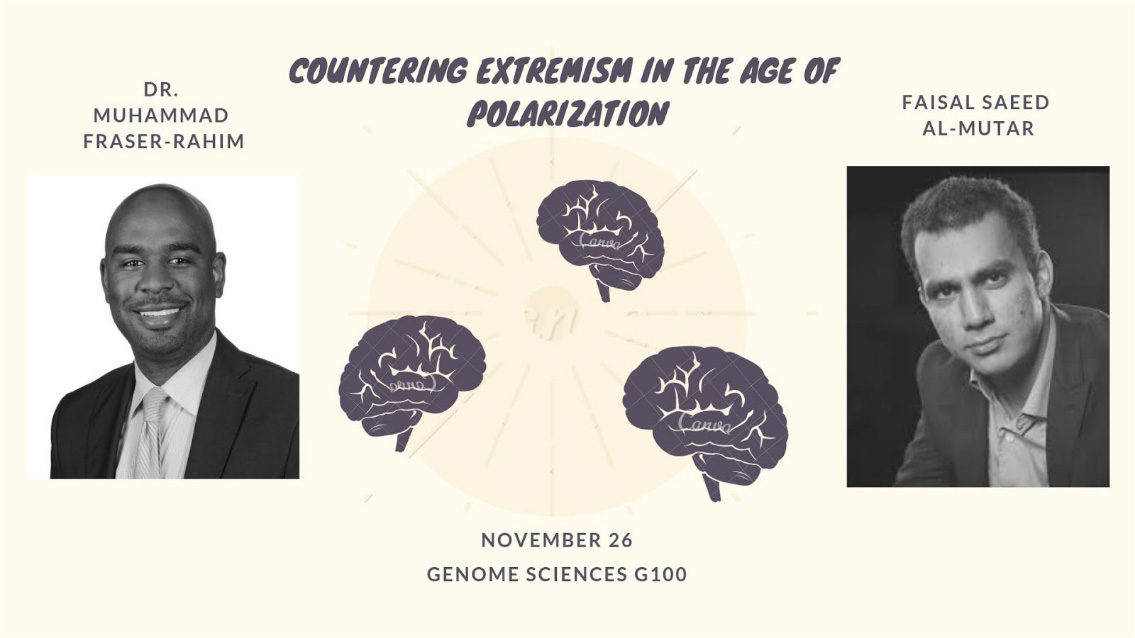 “Countering Extremism in the Age of Polarization” was a conversation between Dr. Muhammad Fraser-Rahim and Faisal Saeed Al Mutar at the University of North Carolina. Dr. Fraser-Rahim is the Executive Director, North America for Quilliam International. He is an expert on violent extremism issues and a scholar on Africa. Faisal Saeed Al Mutar, an Iraqi-born award-winning human rights activist, writer and counter extremism advocate is the Founder and CEO of Ideas Beyond Borders. He is an advocate for universal human rights, secularism and the free market of ideas and is enthusiastic about the intersectionality of technology and advocacy.

Mr. Al Mutar began with asking about the issues that Dr. Fraser-Rahim has faced when discussing Islamic extremism. Dr. Fraser-Rahim stated that there’s a lot of discussion about who is responsible exactly for the extremism, saying, “those who are part of the communities have to be responsible as well.”

At Quilliam, Dr. Fraser-Rahim has worked with many individuals, from overseas, as well as from the United States. The Quilliam website states: “Over the last decade we have grown to have operations all over the world and aim to tackle extremism of all kinds. To pursue our work more effectively and ensure that we are localising our efforts, we currently have a UK team, a North America team, and a Global team.”

Mr. Al Mutar discussed how Muslims are often viewed as a minority (because they are, in the United States); however, Islamism is the second largest religion after Christianity. Mr. Al Mutar posits that the discussion about Islam is more honest in the Middle East, where it is the majority. Mr. Al Mutar believes this is because people do not want to be seen as racist when commenting on Islamic extremism or Islam in general. He asks Dr. Fraser-Rahim how it’s best to navigate this. According to Dr. Fraser-Rahim, a 2017 Pew research poll said that the American Muslim community is multi-ethnic and multi-religious. American Muslims are not all the same and are as diverse as Christianity and Judaism. Muslims are not a monolithic group, Dr. Fraser-Rahim says, and, often, people forget this.

Mr. Al Mutar stated that he works with people from many countries, and his organization often highlights diverse voices, including ones that he disagrees with. The people representing certain views often do not fit the stereotype of what people might think a “stereotypical Muslim” looks like, but it is just as important to allow these views to be heard. He then asked Dr. Fraser-Rahim if it is the responsibility of the government to create more of these conversations or if it is more of a societal responsibility.

Dr. Fraser-Rahim says that he does not believe that it is the government’s place to create these conversations because it won’t be organic. However, places like higher education, civil society, and religious communities need to be part of the solution in creating these dialogues and guiding these conversations. He emphasized the importance of critical thinking and analyzing situations and dialogue, but noted that does not always happen in our communities. Dr. Fraser-Rahim believes this can be even more difficult in religious communities because people already have their own views and what “they may perceive as religiously mandated thoughts.”

Dr. Fraser-Rahim also said that “extremists offer legitimate viewpoints.” With this, he does not support extremists, but concedes that extremists can often use very persuasive tactics that look attractive to people who are looking for a path. There are individuals who are looking for a cause, and, often times, these extremists know how to convince people. They are able to use religious frameworks to manipulate people. Despite maybe thinking “Well, I was born here,” someone may see extremists as “Well, those are my people.” However, he said that he is optimistic about American Muslims having a space in the United States where they can feel welcome.

Mr. Al Mutar also discussed how parts of an ecosystem for an extremist organization to exist like ISIS still exists. He posed the question to Dr. Fraser-Rahim to see if he thought that a sort of “ISIS 2.0” could possibly arise. Dr. Fraser-Rahim replied that at a minimum there will be local to local insurgency movements that will continue to happen.