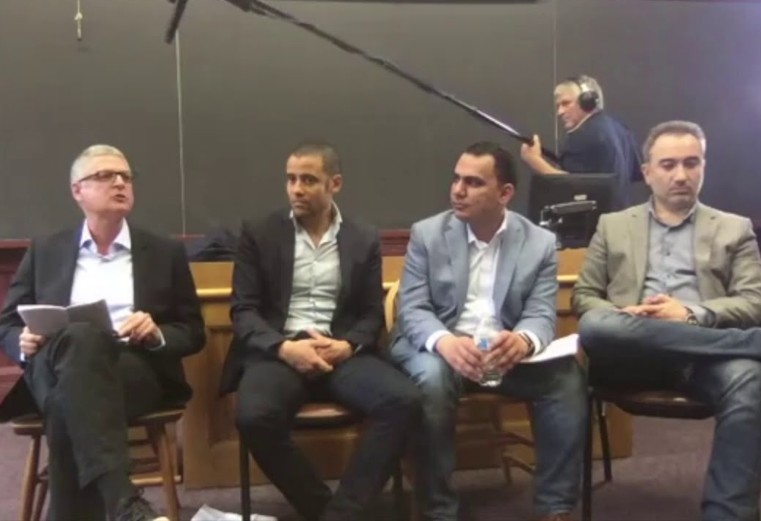 This panel, “Dissent from Minorities Within Minorities” featured Mustafa Akyol, Faisal Saeed Al Mutar and Flemming Rose and was moderated by Jacob Mchangama. Faisal Saeed Al Mutar is an Iraqi-born refugee and CEO of Ideas Beyond Borders. Flemming Rose is a Senior Fellow at the Cato Institute and is the author of several books, including The Tyranny of Silence. Mustafa Akyol is a Turkish contributing writer to the International New York Times and the author of Islam without Extremes: A Muslim Case for Liberty. Jacob Mchangama is a Danish lawyer, human-rights expert, and executive director of the Danish legal think tank Justitia. The panel focused on the role of free speech in the rights of minorities.

Jacob Mchangama began the panel by discussing the importance of the topic, and the importance of the specific setting: on December 3, 1860, an anti-slavery meeting was held at Tremont Temple, only a few miles from Harvard University. This meeting was disrupted by a group of violent white men, citing that the speech of the anti-slavery abolitionists was offensive and should not be tolerated. Today, 40% of American millennials, Mchangama shared, think that the government should be able to censor offensive speech. Mchangama posed the following question: Is free speech a friend or foe of minority rights?

Faisal Al Mutar’s opening remarks began with his life in Iraq under the rule of Saddam Hussein. He stressed that in order to build a democracy, you need to give people more than just the right to vote; you also need to give them freedoms and rights, and this includes freedom of speech. Part of free speech, he argued, is protecting minority and unpopular opinions. The people that we most need to protect, the first enemy of the Islamists, are those in the Middle East including secularists, members of the LGBTQ+ community, and feminists. He also stressed that we must not confuse human beings and ideas: the former has rights, the latter does not.

Flemming Rose argued that free speech has never been popular because it goes against our human nature: it implies the right to tell people what they don’t want to hear. He argued that free speech is important to minority communities because it has always been their greatest weapon against their oppressors. He warned that minorities should be careful what they wish for in terms of hate speech laws, as it only takes a different political majority to turn those laws that protect minorities into those that oppress them. He ended by saying that when we talk about the minorities, we shouldn’t forget that the most important minority is the individual – so protect the rights of the individual.

Mustafa Akyol began his remarks with a personal story: he was in Malaysia giving lectures based on his book, Islam Without Extremes. When Akyol argued publicly against the “rehabilitation centers” for apostates in Malaysia, he was detained at the airport on his way out of the country by religious enforcement officers. He was arrested for teaching Islam without proper authority – which could result in three years in prison. Due to some diplomatic help, Akyol was able to return home within 24 hours. The liberal Islamic motto, Akyol argued, is “No compulsion in religion.” The Malaysians interpret this to mean, no compulsion if you’re already outside of the religion, but once you’re in, there can be plenty of coercion. Muslim reformers are making arguments from the Qur’an, but Muslim fundamentalists are making arguments from those same passages. We can reinterpret religion – it happened in Christianity and it’s happening now in Islam, but we have to protect free speech. And, Akyol warned, if the bar for freedom goes down in the West, it will go much lower everywhere else.

The discussion that ensued touched on where we should draw the line for free speech, whether we should allow for hate speech and how to approach Islamic reform in the West and the rest of the world. All panelists agreed that there should not be limitations on free speech, even that which is offensive, because while laws like this usually have good intentions, they generally end up hurting minorities. Faisal Al Mutar gave the example of the Islamophobia bill in Canada, which actually hurts the efforts of Canadian Muslim reformers.

Mustafa Akyol: “I was arrested by the religious police in Malaysia”

Mustafa Akyol: We can Reform Islam

Mustafa Akyol: Freedom of Expression in the West is Important Globally

Flemming Rose: I defend the right to hate speech