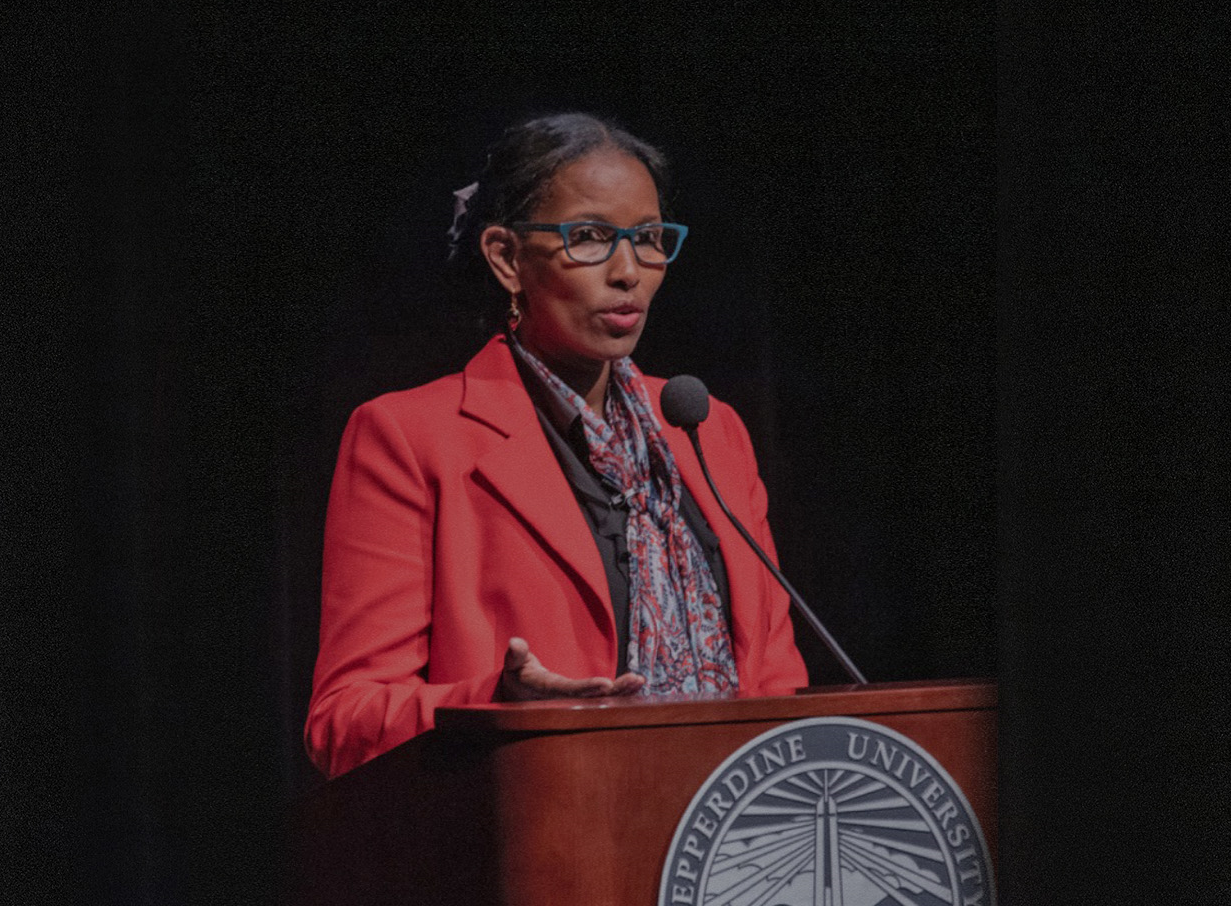 Ayaan Hirsi Ali, speaks at the Pepperdine School of Public Policy at the event titled “The (Transformative) Power of Women

For years, Ayaan Hirsi Ali has been one of the most vocal defenders of free speech. As the ideology of cancel culture grows in prominence, she is again on the front lines to fight for one of democracy’s most important pillars. In an interview, Ayaan explains how her upbringing shaped her stance on freedom of speech.

Whenever you watch Ayaan speak, she always displays a high level of passion—no matter the topic. One of the main focuses of Ayaan’s work over the last decade has been freedom of speech. Recently, she has seen the growing threat of cancel culture and the implications it could have on freedom of speech. With the concept of cancel culture becoming more prevalent in the U.S., I’ve seen her take to The Wall Street Journal, Washington Examiner, and Fox News to fight against this dangerous mindset.

Now that school is starting again and our campus program, the Critical Thinking Fellowship, is getting up to speed, I thought now would be a good time to sit down with Ayaan and talk about why she is such a staunch defender of free speech.

George Zarubin, AHA Foundation’s Executive Director: Ayaan, people who know about you understand how your upbringing shaped your stance on a lot of AHA Foundation’s key causes: female genital mutilation (FGM), forced marriage, honor violence. You’ve spoken about those issues publicly. You’ve always been a defender of free speech, but you’ve been more vocal about it recently with the rise of cancel culture. Can you elaborate on how your upbringing formed your opinions on freedom of speech?

Ayaan Hirsi Ali: When I was young, I grew up in countries like Somalia, Kenya, and Saudi Arabia. In Saudi Arabia and Somalia, in particular, universal human rights as we understand that term in the West do not yet apply. In Saudi Arabia, commanding right and forbidding wrong as determined by Shariah remains the law of the land, although the current Crown Prince appears to be seeking a different course. In many countries today, freedom of speech, especially for a woman, is not guaranteed. If you step out of line, you can be punished.

In my own life, I have witnessed restrictions within the household and within society at large. In Somalia, when I was a young child, the country was under the rule of a dictator, Siad Barre. There was zero tolerance for opinions opposing his authority. He abolished all political parties except for his own and squashed anything he saw as a threat to his control. Dissidence or even mild dissent was met with swift imprisonment. Those who favored charting a different political course—people like my father—faced prison or had to go into exile, or both.

When I escaped to the Netherlands and later enrolled at Leiden University, a whole new world opened up to me. It allows the individual to think and read freely about sensitive issues, and express his or her opinions. It is one reason why I am perhaps more sensitive to the importance of freedom of expression: for many years, I did not have it. From the time I enjoyed freedom of expression, I could not live without it.

When I escaped to the Netherlands and later enrolled at Leiden University, a whole new world opened up to me.

George Zarubin: Tell us about that chapter of your life. How did life in Holland shape your views on freedom of speech?

Ayaan Hirsi Ali: I will always be grateful to the Netherlands and to the Dutch people for their kindness and for giving me an opportunity for a new life. They gave me refuge after I escaped my forced marriage.

The freedom of expression that I found in Holland—the freedom to think critically—is unknown where I come from. It is a right and practice that I always dreamed of having as I was growing up. Whatever its flaws, no nation understands the principle of free expression better than the Dutch. It runs so deep in Dutch culture that while I was a member of the Dutch Parliament, I received protection from death threats, even as some top figures in Dutch politics told me they strongly disagreed with my ideas.

I have since been fascinated with how deeply most people in the West are committed to the idea of an open society. Even though the open society is vulnerable, it is also stubborn. It is the place I ran to for safety and freedom. And I would like to keep it that way: safe and free. There is an irony: some people who were born into this open society appear unable to appreciate the ethical advantages an open society confers over closed societies.

Even though the open society is vulnerable, it is also stubborn. It is the place I ran to for safety and freedom. And I would like to keep it that way: safe and free.

George Zarubin: I want to understand the influence of your father, Hirsi Magan Isse. In your book Infidel, you talk a lot about him and his strong beliefs in the importance of education and government reform. How did your father influence your stance on freedom of speech?

Ayaan Hirsi Ali: Before I was born, my father had gone to Columbia University in New York to study. When he came back, he set up classes in Mogadishu and started teaching Somalis how to read and write. He had become a driving force to push people to become more literate. He had seen how expanded education worked wonders in the U.S, and he wanted to bring that to Somalia.

As people become literate, independent thought progresses and democracy becomes possible. My father had a fairly modern vision for Somalia, but it did not match the authoritarian vision of Somalia’s then-ruler Siad Barre. My father faced imprisonment for political reasons, then went into political exile. My father was absent for many years from our family—we all paid a price for his commitment to the betterment of Somali society. He passionately insisted on the importance of education, and was opposed to female genital mutilation.

My father was absent for many years from our family—we all paid a price for his commitment to the betterment of Somali society. He passionately insisted on the importance of education, and was opposed to female genital mutilation.

George Zarubin: Why is it so important in this current moment that we defend freedom of speech in the U.S.?

Ayaan Hirsi Ali: The ability to speak critically of people, ideas, and institutions is the strongest pillar of democracy. Without it, we are shutting down independent thinking and not allowing differing opinions to enter the public conversation.

That is why I see cancel culture as such a dangerous concept. Debate and discussion are vital to a free, open society. If you have a different perspective on an issue, then come forward and offer a counter-argument. Let’s have a discussion. Sunlight is the best disinfectant for social problems. Generally, silence hurts the most marginalized individuals in a society.  You need true free discussion to safeguard the rights of women, marginalized individuals, religious minorities.

But personal attacks and threats to an individual are not the path to progress. These are the tactics I know well from living in a tribal society: the demand for people to “fall into line.” We’ve seen so much divisiveness in the past several months, groups have been trying to ‘cancel’ people who have differing viewpoints. It’s a danger to freedom of speech. And, one needs freedom to think, and to make up one’s own mind, just as one needs air to breathe.

Ayaan Hirsi Ali:  University students are going to grow up and work in corporations, in non-profits, in government, and in schools. They are the next generation and the ideas that they learn today will be put into action tomorrow. If we can teach them the importance of critical thinking, they will be able to think independently rather than dogmatically.

Lively and respectful debate holds the key to America’s experiment with democracy. By canceling someone’s opinion, and precluding analytical, insightful dialogue, we undermine the values that have made this country a beacon of hope to many. Without vibrant debate on sensitive issues, everybody loses.

George Zarubin:  Thousands of people receive AHA Foundation’s newsletter and read our blogs. How can they help you and the AHA Foundation promote free speech?

Ayaan Hirsi Ali: Social media is a very powerful platform. Posting about the Foundation’s work to your social media accounts is a great start. Supporting the Foundation’s activities in critical thinking is another. Universities are now a key battleground for freedom of speech. Keeping lines of communication open with people in your own life who hold different views but are otherwise “good people” is another. We can’t live in a society where everyone segments into cocoons. We need to keep friendships with people with whom we respectfully disagree.

Universities are now a key battleground for freedom of speech.

George Zarubin: Are there any academics or pieces that you would recommend to our readers for a better understanding of cancel culture?

Ayaan Hirsi Ali: I have come across three people who’ve done especially amazing work: Peter Boghossian is a Professor of Philosophy at Portland State University; Helen Pluckrose is the Editor-in-chief of Areo Magazine; James Lindsay is the co-founder of New Discourses. Helen and James recently came out with a new book, Cynical Theories. If you want to understand the philosophy behind cancel culture and why it is so dangerous, get this book.

George Zarubin: Thank you, Ayaan. You are an inspiration to me and the team at AHA Foundation. And thanks to all the readers of this blog for their donations – big and small. Your support is so important for our work.