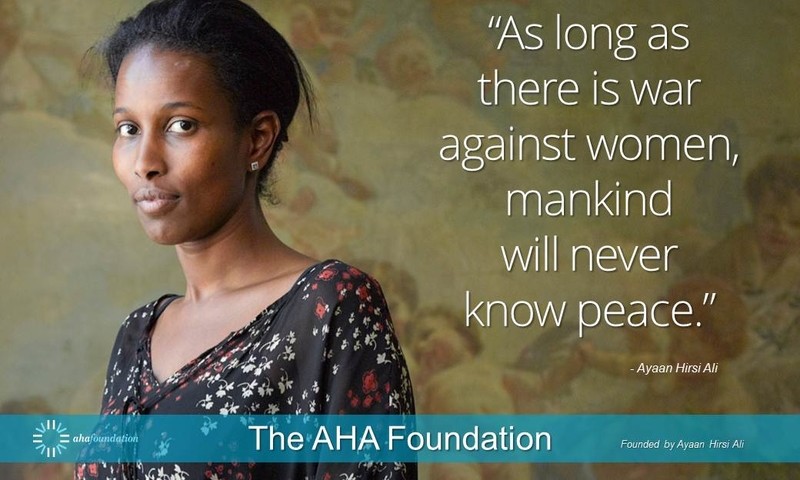 At a recent lecture I attended, AHA Foundation founder Ayaan Hirsi Ali discussed why she is compelled to speak out, even with her life under threat from extremists who wish to silence her. She shared that she survived what she describes as a fairly typical childhood in Africa (by now you likely know the story of how at five-years-old her grandmother subjected her to female genital mutilation (FGM), and how her father forced her to marry a man she didn’t choose and didn’t want) transcending the violence she endured by fleeing her family and the life she knew, pulling herself up from being an asylum grantee in the Netherlands and working as a janitor to support herself, to becoming a member of the Dutch Parliament, and to living a life of freedom with the family she chose for herself here in the US. She speaks out because, “like a cancer survivor,” she says, she feels the need to speak against the incredible difficulties she faced in the hopes that it will save other women and girls from that same fate.

As a woman and as an American, I am proud that this is where she chose to make her home. At the same time, it’s heartbreaking to me to face the fact that the violence Ayaan knew in her childhood is also present here in the US, across small towns and in major metropolitan areas. It’s shocking to know that, according to the Centers for Disease Control and Prevention, more than half a million women and girls are at risk of FGM in the US. That number is big and scary, but it’s not nearly as moving to me as the email we received from a young woman who was cut and needs help because she is suffering.

A forced marriage study the AHA Foundation did with the John Jay College of Criminal Justice found that 84% of students from Middle Eastern, North African and South East Asian backgrounds interviewed at a New York City college reported knowing at least one person in their immediate circle who had accepted an unwanted marriage. That 84% figure is also alarming, but it doesn’t hit home for me in the same way as the college student who wrote to us terrified because her parents had tricked her into going overseas, had trapped her there and were planning to marry her off to an older stranger.

We regularly get those emails at the AHA Foundation; each one comes from a woman or girl who could be your neighbor, classmate, coworker or friend.

So today, on International Women’s Day, it’s impossible for me to ignore the significant amount of work that still needs to be done to ensure women and girls are free and safe to choose their own futures, across the globe, but also right here in the US. I am incredibly hopeful, though, because I see great progress towards making this a reality.

Today, there are many US states taking active steps to try to pass legislation that would make this a safer place to be a woman or a girl. There is pending legislation that would ban FGM in Massachusetts and in Virginia.  Five states – Connecticut, Maryland, Massachusetts, New Jersey, and New York – are considering outlawing child marriage by raising the minimum age of marriage to 18. This shows that there is awareness that these human rights abuses happen here, and that there is the political will to try to stop it.

I’m encouraged because guidance counselors and police officers seek out the AHA Foundation and ask us to teach them how to appropriately respond to honor violence, forced marriage and FGM. These professionals are not looking the other way because they have a misguided concern about criticizing a harmful traditional practice, but instead are taking leadership in their communities by standing up for the human rights of some of its most vulnerable members.

What I am most encouraged by, however, are the courageous women and girls who come to us seeking help because they know that their lives should be their own. They see that if they take action, they might build for themselves the same opportunity Ayaan seized, and chart their own paths.