At the AHA Foundation, we often refer to the fact that one of the most frequent questions we encounter regarding honor violence is, “that happens here?”.That question often comes not just from the public, but from social workers, lawyers, domestic violence experts, and even law enforcement officers; in short, those professionals who are most likely to encounter cases of honor violence. The fact that frontline service providers have little knowledge of the issue is no coincidence; honor violence often happens with the consent of entire families or communities, shrouded in silence and operating in a very different way from more traditional domestic violence cases.

The consequences of this lack of knowledge can be severe, if not deadly. In 2015, a 19-year-old girl from Germany was murdered after her family received a letter from police, telling them that their daughter had shoplifted condoms. This perceived act of impropriety led to the girl’s parents deciding to take their daughter’s life in an honor killing. While training of law enforcement may not have prevented this tragedy, it certainly would have greatly reduced its likelihood. Hila*, an honor violence escapee from the US, put it this way: “potential victims need to be reassured that approaching authorities won’t immediately backfire on them.”

Since our inception, live honor violence trainings have been a key part of the AHA Foundation’s work. With over 1,000 service providers trained to date, we are actively working to prevent tragedies like this.

For the first time, the AHA Foundation is offering its training courses online, with the launch of a free Online Training program for service providers and other professionals likely to encounter cases of honor violence.

Developed in consultation with law enforcement officials and international honor violence experts, the Online Training program will give service providers the opportunity to receive certification in handling honor violence cases, regardless of location or financial means.

Our program, the first of its kind, will cover areas such as:

In speaking about her time in the foster care system after surviving a forced marriage, activist Naila Amin explained, “[the people helping me] had no idea what to do with me, they had no idea what honor violence or forced marriage is…How do you understand something that you do not know?” By giving service providers the tools to handle cases of honor violence, they will be better prepared to identify, prevent, and stop these crimes when they occur.

Those at risk should not have to fear the consequences of reaching out to the very people who are meant to protect them. Programs like this, made possible through your support, bring us closer to making that a reality in the US.

Please renew your support of the AHA Foundation today to assist in this and other life-saving initiatives. 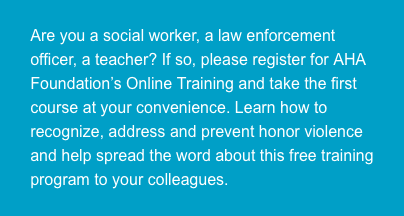