Representative Kay Khan: “…the more I learned [about child marriage in Massachusetts], the more I realized we needed to act.” 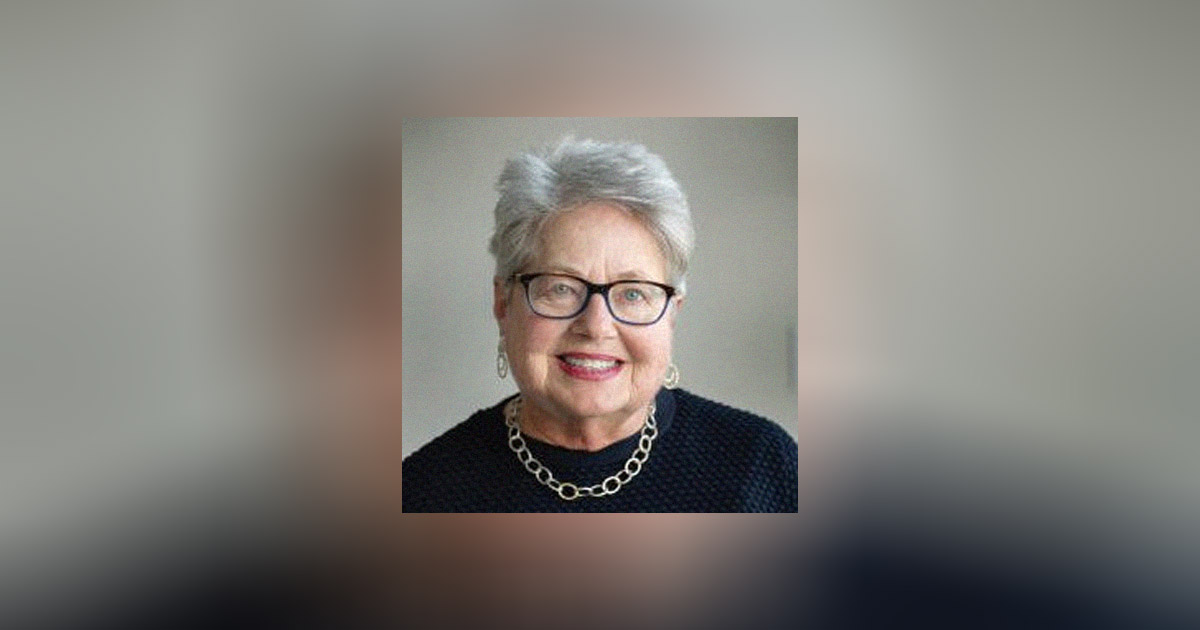 This month, the fight to end child marriage in Massachusetts reaches a crucial moment. Two bills have failed over the last four years, leaving 1,246 girls in the Commonwealth at risk of this abuse. We have high hopes that this vital first step will lead to a victory for the girls of Massachusetts.

Along with our partners, we are hard at work advocating for the passing of the companion bills (H.1709 and S.937) introduced by Representative Kay Khan and Senator Harriette Chandler. They are due to be heard by the Joint Committee on the Judiciary tomorrow. Led by Rep. Khan, our champion in this effort, AHA Foundation will testify at the hearing alongside various allies. We spoke to Rep. Khan about her journey and hopes for the bill just a few days prior to the hearing.

This month, we received great news—Rep. Khan’s bill has passed the Massachusetts House of Representatives! We are one step closer to ending child marriage in Massachusetts forever. Read all about the news here.

AHA submitted written testimony (see bottom of page) and testified orally in support of this bill and we are proud of the part we played in this milestone achievement. For 6 years, we have been working on this bill with partner organizations, and after various stalled attempts, we are close to victory. Perseverance pays off! This is a great achievement, and we will continue to fight to push the bill over the finish line in the full legislature.

We would also like to thank YOU, our supporters, because the vital work we do would be impossible without your generosity.

Victory at last! Governor Charlie Baker signed the Massachusetts budget bill on July 28, 2022, which includes a provision banning child marriage in the state. This is great news—slowly but surely, we are getting closer to ending child marriage and protecting women and girls in all 50 states.

AHA Foundation: Thank you for agreeing to speak to us. Could you tell us a little about yourself and specifically your role in the fight to end child marriage in Massachusetts? How did you get involved in this issue?

Rep. Khan: I am a state representative in the Massachusetts Legislature. I am also a nurse, a mother and a grandmother. In 2017 I was approached by a journalist who asked if I was aware of the problems of child marriage, and I was shocked because I had no idea it was an issue. As a result, Senator Chandler and I brought together a group of professors, lawyers, and legislators where we focused on how to best resolve the issue.

AHA Foundation: Why are YOU so passionate about and dedicated to this fight?

Rep. Khan: Throughout my career, I have always tried to bring a voice to the voiceless. Women and girls are often forgotten in policymaking and I have strived to make sure their issues are at the forefront. I originally filed the bill in 2017 to address the shocking statutes that allow children to get married in the Commonwealth. I, like many others, was unaware child marriage even existed in Massachusetts but was completely shocked when a journalist brought it to my attention, and the more I learned, the more I realized we needed to act.

AHA Foundation: Tell us about your experiences with the various groups who have been advocating for this legislation.

Rep. Khan: We have been thankful to gain the support of numerous groups to support this bill including AHA Foundation, Unchained at Last, Zonta, and The Children’s League of Massachusetts. Recently, on September 26, I was pleased to pick up my wedding dress and speak at the Chain-In rally, organized by Unchained at Last. High school students from Brookline High School and Walnut Hills School have also shown interest in and support of this bill. Additionally, we have a large coalition of supporters of various backgrounds and professions.

AHA Foundation: Tell us about the history of the bill. Why has it failed to go through twice now?

Rep. Khan: 6,000 bills are filed every session and legislators have to spend a lot of time educating and lobbying on their own priorities. It’s a lot of work to educate and gain co-sponsorship but it’s an important part of the process; however, sometimes this can take a few tries. There are so many priorities every session and, ultimately, some important bills won’t be passed. This session the bill has been able to get a lot of attention and advocacy so we are very hopeful this will be the time it goes through.

Child marriage is an urgent problem in Massachusetts. While the marriage age is 18, children of any age may marry if they gain judicial approval and parental “consent.” This “consent” is often actually parental coercion.”

Rep. Khan: Many people are completely unaware that this remains a problem both within Massachusetts and also within our country. Child marriage can destroy a child’s health, education, and economic opportunities as well as increase their risk of experiencing violence. Child marriage is an urgent problem in Massachusetts. While the marriage age is 18, children of any age may marry if they gain judicial approval and parental “consent.” This “consent” is often actually parental coercion.

AHA Foundation: Do you think the bill has a good chance of being passed this time around? What is the current state of affairs?

Rep. Khan: We are currently preparing for the Joint Committee on the Judiciary to hear the bill on November 16 and are very hopeful it will be passed. The bill has received bipartisan support and has been co-sponsored by over 100 state legislators.

AHA Foundation: What are the next steps in Massachusetts, assuming the bill passes?

Rep. Khan: This bill will keep the marriage age at 18 but eliminate the dangerous loopholes that allow child marriage. Meaning, individuals will not be able to obtain parental consent to authorize a marriage of an individual under the age of 18.

AHA Foundation: Why do you think that issues like child marriage have flown under the radar for so long?

Rep. Khan: People are largely unaware that child marriage exists in Massachusetts, however, unfortunately, it does. Between 2000 and 2018, 1,246 children as young as 13 were married in Massachusetts and at least 83% were girls wed to adult men.

This bill costs nothing, harms no one, and, ultimately, saves children from human rights abuse. These individuals often have no say or voice in these decisions so it is imperative that we use our voices to lift them from harmful situations.”

AHA Foundation: Why is it so important we legislate against child marriage and other forms of oppression of women and girls?

Rep. Khan: This bill costs nothing, harms no one, and, ultimately, saves children from human rights abuse. These individuals often have no say or voice in these decisions so it is imperative that we use our voices to lift them from harmful situations.

AHA Foundation: Do you have hope for the future that child marriage will be banned in every state?

Rep. Khan: This is a bi-partisan effort, but there remains a lack of priority for state legislators. Research shows that child marriage affects everyone, not just specific demographics. One of the biggest reasons child marriage hasn’t been banned more universally is because people are largely unaware that it occurs. Education and advocacy are key in banning child marriage on a larger scale.

AHA Foundation: What have you learned from this years-long battle to ban child marriage in Massachusetts that shocked you?

Rep. Khan: Judges have a wide discretion to approve marriages even with a spousal age difference that constitutes statutory rape. This makes a mockery of statutory rape laws: marrying a child 15 or younger is legal, but sex within the marriage is rape. Of the 1,246 children from 2000-2018, 59 of the children married were not yet 16 and therefore unable to consent to sex under Massachusetts law.

As legislators, we look to our constituents for feedback about taking action. People can call their Senator and Representative and express their support for this legislation.”

AHA Foundation: What can ordinary people do to help you and others fight against child marriage?

AHA Foundation: As a bonus, we are planning to feature this interview in our November newsletter around Thanksgiving time, so: what are you thankful for?

Rep. Khan: I am thankful that the Judiciary Committee is holding this hearing on November 16 as an opportunity for legislators and advocates to come together and share how important this bill is. 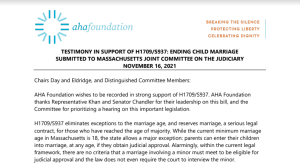 Read the written testimony submitted by AHA Foundation in support of the bills here.