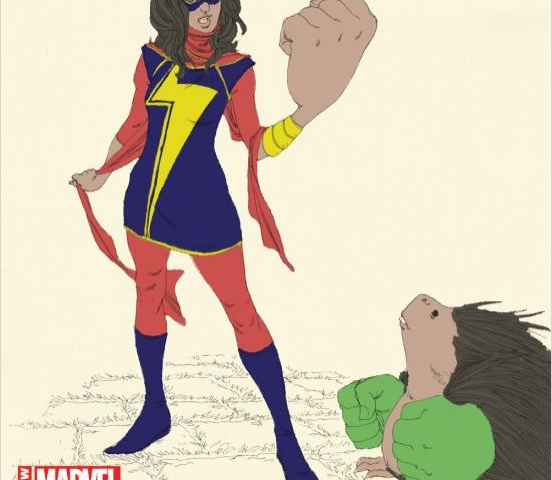 There’s a new superhero in town, and she’s not your typical white guy in a cape. The newest addition to the Marvel Comics family is Kamala Khan, a sixteen-year-old Pakistani girl from Jersey City. She discovers that she is a polymorph—a shapeshifter—and takes on the identity of Ms. Marvel. But evil villains aren’t the only challenges facing the new Ms. Marvel. Not only will she be negotiating the tricky web of high school, teenaged Kamala also has to deal with her conservative Muslim family.

In a news release, Marvel said, “Like a lot of children of immigrants, she feels torn between two worlds: the family she loves, but which drives her crazy, and her peers, who don’t really understand what her home life is like.”

When we heard about Kamala, we were thrilled to see some diversity coming to the world of comic books, which have historically featured superheroes that are white, straight, and male. Marvel, no doubt, hopes that having a character like Kamala will attract new readers and spark interest in the growing diversity of its characters. In fact, they already have several Muslim superheroes as well as characters that are black, Latino, or gay. But do Kamala’s superpowers make her any more equipped to reconcile her conservative Muslim background with her American lifestyle?

Introducing a character meant to represent a specific group always runs the risk of tokenism, and one worry is that Kamala and her family will become caricatures of Muslims in America. In the words of series editor Sana Amanat, “Her brother is extremely conservative. Her mom is paranoid that she’s going to touch a boy and get pregnant. Her father wants her to concentrate on her studies and become a doctor.” But just because this character speaks to a specific group of people doesn’t mean she speaks for that group of people. If not handled well, her home life might turn readers off.

This is a setup we’ve seen before in TV, movies, and books: a conservative family trying to maintain their values while their headstrong child tries to assert her independence. We’re interested to see what shape the conflict in Kamala’s life takes. Will Kamala face the same kinds of dilemmas that some of her peers grapple with and if so, how will she choose to handle them? Will her family’s concern for her happiness and for the greater good of the family conflict with her independent Western lifestyle? Will they support any decisions she makes for herself, and if not, how might they oppose her? Will they fixate on how she is acting too American and not adhering to their more conservative cultural ways? Will her mother punish her for wearing Western style clothing and makeup or for talking to boys? If she chooses not to be married young, will her decision be supported by her family, or will they say she is dishonoring them? We’re not sure Marvel Comics will delve too deeply into the critical subjects of honor violence, forced marriage, and female genital mutilation addressed by the AHA Foundation, but we hope that Kamala can open a dialogue about some of them.  If the conflicts with her family don’t accurately reflect what it is like to grow up torn between two cultures, this Ms. Marvel might be short-lived.

Many girls whose lives are similar to Kamala’s will hopefully be reading these comics and will see themselves in her. “This story isn’t about what it means to be a Muslim, Pakistani or American,” says Amanat. “Those are just cultural touchstones that reflect the ever changing world we live in today. This is ultimately a tale about what it means to be young, lost amidst the expectations bestowed upon you, and what happens when you get to choose.” That’s something her readers will definitely be able to relate to, even if not everyone has to make the same choices. So however Kamala’s story unfolds and whichever bad guys she fights, it’s how she’ll solve the more human problems that will make her a real superhero.