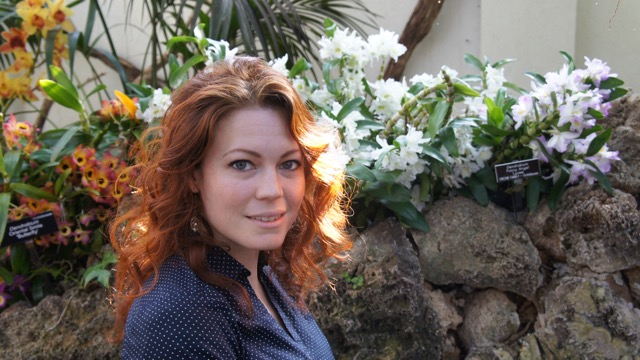 The image most often associated with a woman or girl who is forced into marriage is that of an individual in a faraway country. The truth is that forced marriage doesn’t just happen overseas, it happens right here in the US, and this abuse spans religions and cultures. Nina Van Harn grew up in Michigan in a conservative Christian family. At 18, her father let her know it was time for her to get married and that he had already chosen her husband. Nina spoke AHA Foundation about her experience and her life since then. 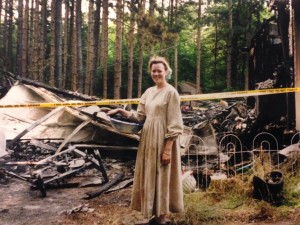 Nina in her childhood town in Michigan

AHA Foundation: Please share with us a little of your background.  Where did you grow up?  What was “school” like for you? How would you describe your childhood? Did you ever have hopes outside of being a wife and mother?

Nina: I grew up on an idyllic 40 acre farm in rural west Michigan with my parents and three siblings. Up until halfway through the 3rd grade my life was fairly typical of any rural child’s life. It was then however that my Dad took us out of school and my parents started homeschooling my siblings and I. We started living a more and more conservative lifestyle and only closely socialized with family and friends that held similar views.

By the time I was 11 years-old we had fully adopted the beliefs and lifestyle of the Christian Patriarchy Movement. Father was the absolute head of the home and the woman and children’s place was to support, honor, respect and most importantly, obey him at all times. By the time I was 13 I firmly believed that the only role God intended for me to play in life, was that of wife and mother. I dreamed of being a world traveler and a missionary. I just knew that the only way I was going to get to do that was if I was fortunate enough to marry a missionary.

“…my Dad gave me some ultimatums. Marry the man he picked or get condemned by God and shunned by my family.”

AHA Foundation: You were 19-years-old when your father told you he had found a husband for you. How did you feel? Did you feel as if you had a choice to say yes or no? Did you feel equipped to make that kind of a decision?

Nina: The first time my dad told me he had found a spouse for me was several days after my 18th birthday. After several months of waiting for the fathers to deliberate, that arrangement ended up falling through before I even met the potential groom. The second time, I was 19. I felt a bit surprised, I didn’t know the person he was talking about and thought it would take just as long for everyone to make a decision.

In the year before, I had started to dream of freedom and traveling and now I was faced with having to marry someone that was a self-professed homebody. Yet, I was thoroughly trained to believe that my dad knew what was best for me, much more so than I ever could. I had learned to trust him with my life.

Nina and her father on her wedding day

A couple weeks into the process, my dad gave me some ultimatums. Marry the man he picked or get condemned by God and shunned by my family. I didn’t feel I had a choice to say no. My faith was extremely important to me. To deny God was to hand my soul to the devil and live in hell. My family was of equal importance. Without them, I had no one. I would be completely alone and on my own. Having never made an important independent decision on my own, I wasn’t equipped to stand up for myself and refuse. There was just too much at stake.

AHA Foundation: You once told me that on your wedding day, you asked your father a question before he walked you down the aisle.  Will you recount that story for us?

Nina: My goal in life had been to please my father and earn his trust. To make him proud of me. I was very nervous as he put the veil over my face and I was being prepared to walk down the aisle. “This is it Papa, are you proud of me?” I asked. He got the biggest smile on his face, looked at me and said “I am so proud of you Nina.” I had waited my whole life to hear him say that. I started beaming! I was over the moon happy. I had FINALLY done something to make my Dad proud of me.

“That moment when you wake up and realize you’re in a cult.”

AHA Foundation: Was there a moment when you looked at the marriage you were in and realized it was a “forced marriage?” If so, what was that like?

Nina: I was in a counselor’s office and she was explaining to me what a bounded choice was. A choice with only one feasible choice. She said “That’s force.” I accepted it on a psychological level. I understood it. However, it didn’t hit me emotionally until a couple days later when I woke up with a start in bed, grabbed a piece of paper and wrote “That moment when you wake up and realize you’re in a cult.” It’s like a light went on, the fog in my head cleared and it all suddenly made so much sense to me. It was terror and relief all at the same time. The people you thought were your protectors were actually your captors.

AHA Foundation: The decision to leave a marriage is always difficult.  In your case, it must have been even more so.  What was that like?  What differences did you face that most women do not when they decide to end a marriage?

Nina: As soon as I realized that I had been forced and that the reason I felt like a shell of a person living in a haze because of the abuse and sexual assault, I knew I couldn’t stay. However, getting out seemed almost impossible. Most women have at least one person they could call that would take their side and help them. My circles were limited. Anyone on the “outside” were kept at arm’s length. Acquaintances you couldn’t call for help. Everyone on the “inside” wouldn’t help. They would only tell me to stay. I also didn’t trust community organizations like women’s shelters, social services or any type of government agency or the police. I had been brainwashed to believe they were all evil.

All the same, I started planning an exit. It took six weeks for everything to come together. Finally, by the grace of God, one friend saw through my fake smiles, recognized that something was majorly wrong and offered to help get me out. I wasn’t entirely sure I could trust her but it was my only hope. I got out. Leaving didn’t just mean leaving my children’s father. It meant leaving my family and my community. Knowing, I would likely, never be able to go back. It was terrifying but not as terrifying as staying.

AHA Foundation: You were recently granted an annulment in the state of Michigan based on the fact that your marriage was not consensual, the first case of its kind in the state.  What does that mean to you?  Do you feel as if the effort you put in to get this momentous outcome was worth it?

Nina: Having the marriage declared illegal means everything. It is validation of what I had gone through, what had been done to me. It is justice. It took a lot of effort, support, money and time to accomplish but I feel it was absolutely worth it. My hope is that it will also pave the way for other women to have the same outcome. It also means that I can, with certainty, talk about my case as an absolute. Many people don’t want to believe forced marriages happen in the US, in the Midwest, in white, middle class, Christian families. I was in a forced marriage, just ask the State of Michigan.

AHA Foundation: What are your plans for the future?  You have already been a courageous advocate fighting forced marriage in the United States; do you plan to continue that work?

Nina: My plans are to continue to advance and grow as an individual and to raise my children as independent, caring people. I absolutely plan to continue working as a survivor advocate. No girl or woman should have to go through that. To have their life stolen from them. Many people could look at my life and say “Despite the abuse, you still had a pretty good life, it could have been worse. ” Yes, that’s true. However, it also could have been much better. I have scars that will stay with me for life. There are things I just can’t undo, losses I will never regain. I can work on healing and moving on but this will always be a part of me.

If you are in a forced marriage or at risk from forced marriage or other harmful traditional practices – help is available. To speak anonymously with a compassionate, non-judgmental crisis counselor for free 24/7, text FREE to 741-741. Texts are private and secure.