Panel: “Religious Extremism in the Middle East” at the University of Rochester 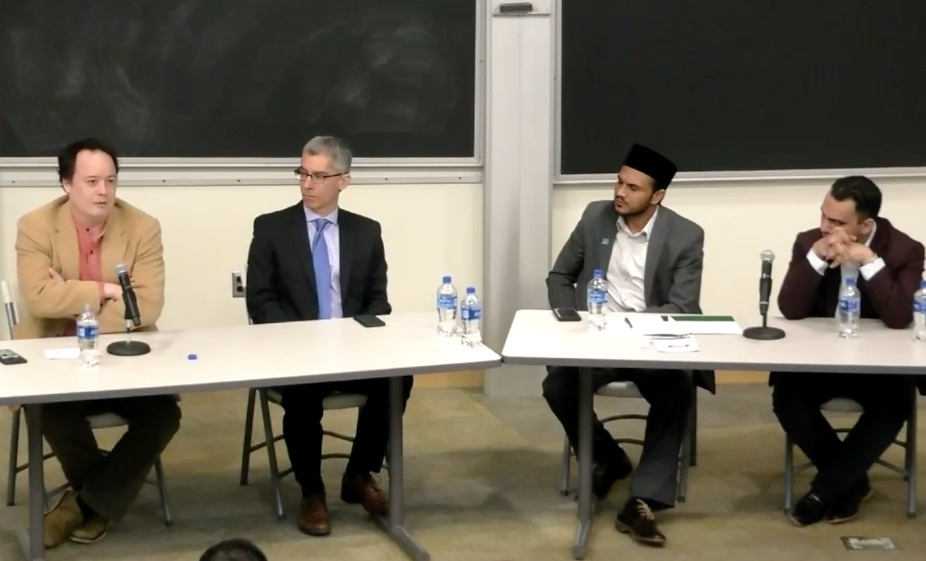 On Thursday, March 21 the University of Rochester College Republicans and Ahmadiyya Muslim Youth Association, with support from CTF, hosted a panel discussion on Religious Extremism in the Middle East.

This event focused on the connection between religious belief and terrorist groups and  featured several individuals knowledgeable about the threat of extremism. Graeme Wood, the Award-winning writer at the Atlantic, was joined by activist Faisal Saeed Al Mutar, author  and Ayn Rand fellow Elan Journo and Ahmadi Imam Adnan Ahmed, to seriously discuss issues of religious extremism.

In the wake of the tragic New Zealand shooting, the Panelists took time to also address White Nationalist violence and noted the similarity with Jihadism, in that both movements are motivated by ideology and cannot simply be explained away as mental illness.  The elephant in the room was the relation between Islam the religion and Islamist terrorist groups like ISIS and Al-Qaeda. Imam Ahmed did not believe this was the case and argued that such bad actors were perverting the nature of the religion instead. The other panellists respectfully disagreed with him and, though observant of the fact that there are many ways to practice Islam and that Muslims were a diverse group of people, nonetheless, the fundamentalist readings of the faith were meaningfully tied to the religion.

The Q&A session was very eventful: though loud and boisterous, the student protestors still managed to ask questions and the speakers, despite heckling, managed to respond.

Lorenzo Vidino, the director of the Program on Extremism at George Washington University, argues that Washington’s willingness to work with some jihadists could backfire. Full article here: buff.ly/3hXSd4q pic.twitter.com/YNPNLRtiDL

Child marriage laws should be clear-cut. The words "however" or "in instances of" only open the door for girls to be taken advantage of. #18NoExceptions #EndChildMarriage Learn more about the dangers of child marriage here: buff.ly/3hWmKja pic.twitter.com/hTQrHuln6S

Nearly a month ago, an Arizona family committed an act of honor violence against a pregnant woman. It may seem like these things don't happen in the U.S., but they absolutely do—and we must do something about it. The story from Arizona: buff.ly/38pMXBz pic.twitter.com/Bx9NavwslR

It's horrifying the steps people will go through to dehumanize and control women. These tests serve no other purpose than to do just that. twitter.com/UnchainedAtLas…