Sara’s Story, Part 2: A Survivor of Child Marriage in the U.S. on Why She Fights to Change the Laws That Allowed Her Abuse: “These [current] laws put minors into an impossible legal situation, and expose them to multiple forms of abuse.” 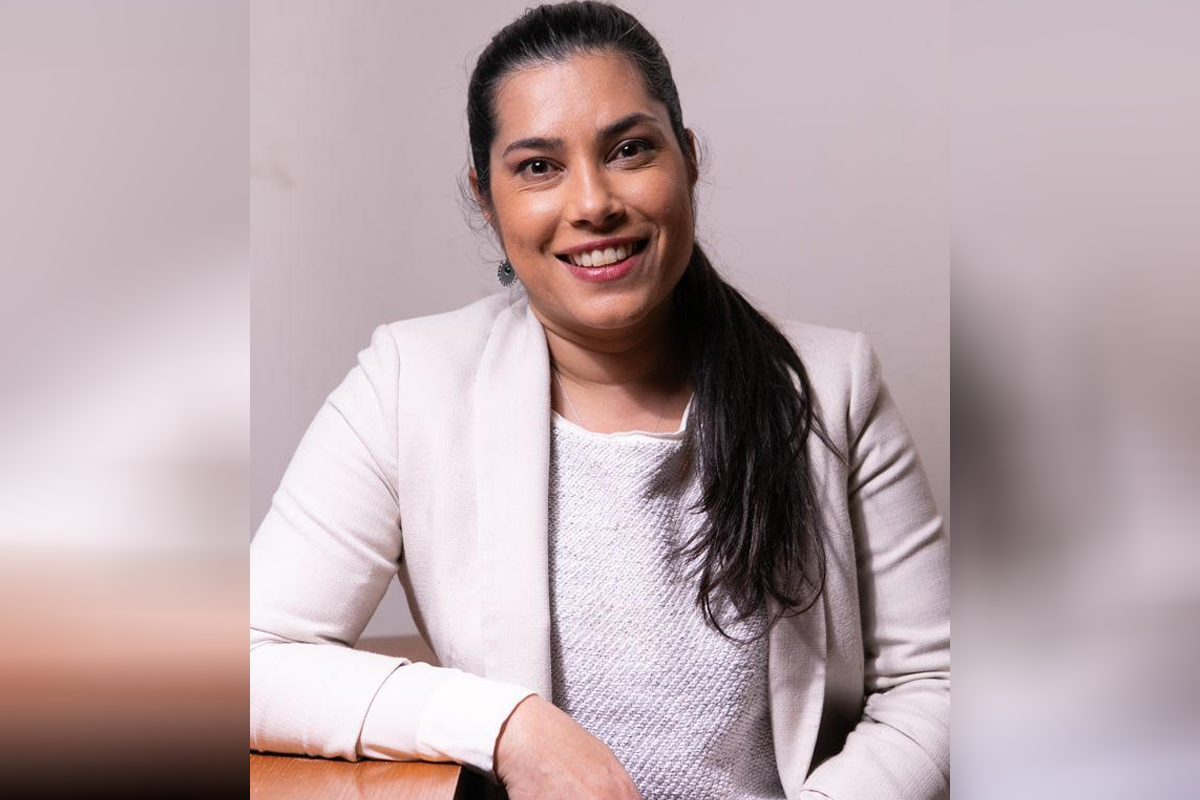 Sara Tasneem was trapped in a marriage with a stranger when she was just 15 years old. This happened in the U.S. Now a free and independent woman, she bravely fights for anti-child marriage legislation so that other girls don’t have to go through the abuse she experienced.

Last month, she told her harrowing story (see here). Now, she tells us about her courageous activism to end child marriage in the U.S.

Healing From the Trauma of Child Marriage

I have taken a lot of time to heal from the trauma of being forced into a marriage as a child. Even so, it has had lifetime impacts on both me and my children. I have been in therapy for the past 5 years and that has helped me to identify and move on from the abuses of child marriage. Abuse was normalized for me at a young age, which was why it was so hard for me to recognize it. Instead, I blamed myself for many years until I started going to therapy and began to understand the abuse I had been exposed to.

Having to take care of my children on my own was extremely difficult after I left my ex-abuser. There were times I was facing poverty and was homeless for a brief period. Finding a new support system was very important to my survival so that I could move on from the abuse and re-establish a new life. Even though it was difficult, raising my kids kept me grounded and motivated me to rebuild a better life.

“My work and family have been a huge motivation for me to deal with my trauma and to find better ways to manage my PTSD and anxiety. My kids are now in their twenties and are fully in charge of their own futures.”

The most empowering thing I did to reclaim my freedom was to go back to school, and in 2019 I graduated with honors with my master’s degree in Public Administration from Golden Gate University. My work and family have been a huge motivation for me to deal with my trauma and to find better ways to manage my PTSD and anxiety. My kids are now in their twenties and are fully in charge of their own futures.

How I Became an Activist to End Child Marriage in the U.S.

Currently, only 6 states have ended child marriage. There are 44 states that allow minors to marry through exceptions written into marriage age laws. These laws do not protect a minor’s safety. This is why this advocacy work is so important.

FIND OUT MORE ABOUT CHILD MARRIAGE IN THE U.S.

I started engaging in activism in 2016 when I was studying for my bachelor’s degree. I was doing a research project about child marriage and I learned that child marriage was legal in all 50 states, and that it was happening with alarming frequency. I was so shocked and appalled. Up until that point I thought my experience was an anomaly.

I have testified in many states in front of legislative bodies in hopes that legislation would be passed to end child marriage. I shared my testimony as well as lobbied for legislation that ends child marriage under the age of 18, with no exceptions, otherwise known as “brightline 18 legislation.”

I have shared my story across multiple media outlets and in a feature-length documentary film, Knots: A Forced Marriage Story.

“I believe in the power of education and that empowering all girls to obtain their education is a powerful tool against child marriage. Education allows girls to decide their own futures.”

I believe in the power of education and that empowering all girls to obtain their education is a powerful tool against child marriage. Education allows girls to decide their own futures. Educating parents is also a tool to end child marriage. The more parents know about the serious harms of child marriage, the more that they will also become aware of the abuse and hopefully find other options for their children.

There needs to be a cultural shift around what relationships and boundaries mean to young people. Talking early and often to girls and boys about their own boundaries and consent is vital to empowering children and helping them to be aware of violations of these boundaries.

Ultimately, children’s autonomy and ability to thrive and pursue their own goals must be protected by the law. I strongly believe we must make marriage under the age of 18 illegal in all states so that there will be a strong message to the public that child marriage is unacceptable.

How the Law Failed Me

The laws in Nevada in 1997, when I was legally married, allowed my father to consent on my behalf. I was not asked if I wanted the marriage and my mother was not notified. The mere fact that I was 16 and pregnant should have been a signal to the officiant that I was in a coercive relationship with an older man. Once my marriage certificate was stamped it forced me into a legal trap.

“At the age of 16, I had not yet learned how to drive, I was not allowed to work, I had been pulled out of school, and was pregnant. I clearly did not share the same rights as an adult…Even if I had been strong enough to stand up to all my abusers, I would have had nowhere to go…”

In California, where we lived, my marriage allowed my abuser to escape statutory rape charges. At the age of 16, I had not yet learned how to drive, I was not allowed to work, I had been pulled out of school, and was pregnant. I clearly did not share the same rights as an adult. As an adult, you can enter into a contract, such as a lease. You can go to a domestic violence shelter and access shelter services and legal services. Under the age of 18 those vital services are not available to a minor. Even if I had been strong enough to stand up to all my abusers, I would have had nowhere to go and most likely would have been returned to my ex. This is why these loopholes are so dangerous. These laws put minors into an impossible legal situation, and expose them to multiple forms of abuse.

There are many obstacles to ending child marriage in the U.S., mainly because it is not a well known issue and because of that there are many stigmas associated with it. There is a collective idea that all parents have their children’s best interests in mind. However, that is not always the case. 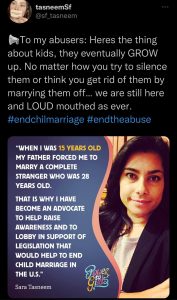 Now a free and independent woman, Sara raises her voice against the injustice of child marriage.

For many child marriage victims, it is often the parents who have forced them into the marriage. The common thread of child marriage is that it happens where there is already abuse occurring. We can overcome this abusive practice by elevating survivor voices, by educating our children, and by raising awareness of this abuse so that our society creates change around these practices. The most meaningful way to end this practice in the U.S. is to lobby for legislation that ends legal forms of child marriage from happening at all. One child bride is one too many.

My Message to Readers

Please find out about your local laws and if they allow child marriage to happen. If so, please write to your legislators and demand change. Anyone can become an advocate and a voice for change. You may help a young girl who doesn’t have a voice. I hope that you, the reader, will become engaged, and share this story and all the stories like it and continue to raise awareness of this issue.

My Message to Legislators

I demand that my legislators change the law to end all marriages under the age of eighteen, no exceptions. The risks to minors are too great for us to look past the inherent danger and abuse that these laws allow. I would tell them my story in hopes that no other child has to go through what I and so many other survivors have gone through. I have created a petition for my local California legislators and hope they will finally take notice to protect the women and girls in our nation. It is important that awareness is raised about child marriage in the U.S. because of the devastating harm it causes to minors.

VISIT SARA’S WEBSITE TO FIND OUT MORE ABOUT HER ADVOCACY