Sean Callaghan, U.K. based researcher, finds FGM prevalence in the U.S. 17% higher than CDC latest estimate: “There could be as many as 600,000 women and girls potentially impacted by FGM living in the U.S.” 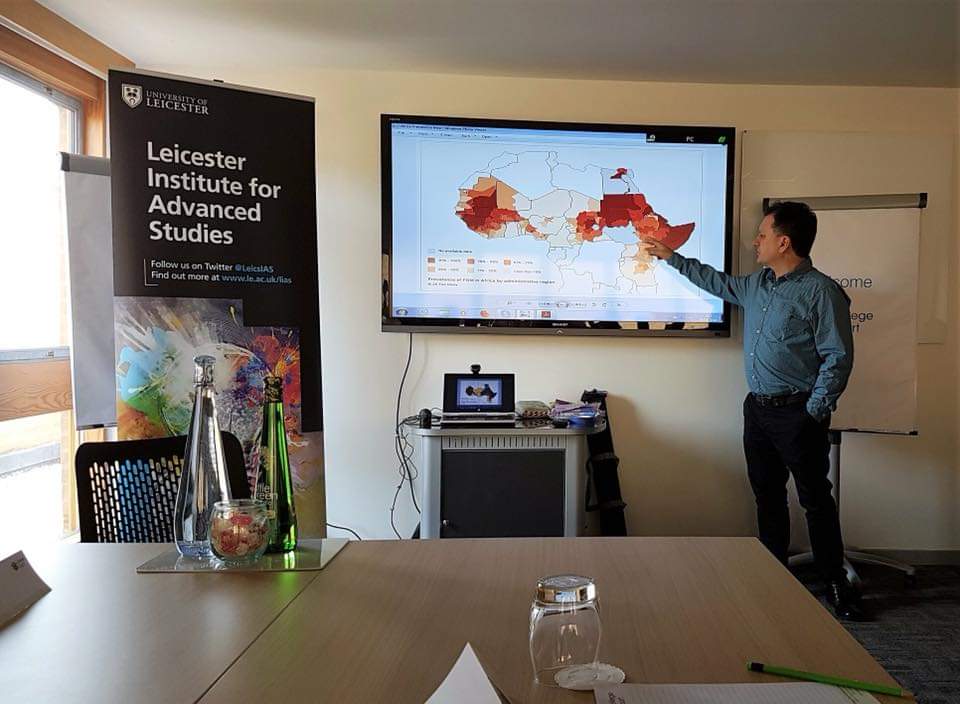 Sean giving a presentation about his research.

Sean Callaghan is pursuing a PhD at the University of Leicester in the U.K. His research, which is supported by AHA Foundation, focuses on the prevalence of female genital mutilation (FGM) in diaspora communities in Europe and the U.S. We caught up with him to discuss what inspired him to tackle FGM, the nature of his research, and his surprising finding that the Centers for Disease Control (CDC) estimate for FGM prevalence in the U.S. is likely wrong.

AHA Foundation: Thanks for speaking with us today, Sean. Could you start off by telling us about yourself and your background?

Sean Callaghan: I am a U.K.-based researcher and human rights activist. I have worked in international development for over 30 years. The last decade of that has been focused on gender justice issues, predominantly in Africa.

As a South African by birth, my early work was on issues of racism and reconciliation—challenging those injustices initially in the South African context and then more broadly across the continent. Along that journey, I kept meeting incredibly powerful women who spoke of another, often more hidden, injustice—gender injustice.

My work brought me into contact with women like Anu (who worked on gender justice issues for the Liberia Truth Commission) and Wangu (who worked to address sexual violence in Kenya). These women taught me to see my own privilege and prejudice as a white South African and, more importantly, as a man.

I think of [FGM] like apartheid: clearly a human rights violation, but seen as normal in practicing communities. I grew up [in South Africa] thinking apartheid was just the natural (even divine) order of things. Over time I came to unlearn that way of seeing the world. This gives me hope that FGM-practicing communities can go on a similar journey.

That journey, and those women, have shaped not only what I do, but who I have become. Along that journey, I started to meet women engaged in other gender justice issues such as sex trafficking, domestic violence and FGM.

FGM is a really challenging social norm, especially when viewed from the South African perspective. I think of it like apartheid: clearly a human rights violation, but seen as normal in practicing communities. I grew up thinking apartheid was just the natural (even divine) order of things. Over time I came to unlearn that way of seeing the world. This gives me hope that FGM-practicing communities can go on a similar journey.

Sean Callaghan: My work in Africa naturally spilt over into exploring African diaspora communities, initially in the U.K. and then more broadly. I was surprised by the numbers of women and girls from FGM-practicing communities now resident in Europe and the U.S. There have been a lot more studies on the issue in Europe and so I saw an opportunity to bring some of that thinking into the U.S. context. I met Amanda [Parker, Senior Director of AHA] and George [Zarubin, Executive Director of AHA] through the global FGM network. I then came to Washington, D.C. a couple of years ago and presented some of my early findings and ideas at an event.

AHA Foundation: In layman’s terms, what is the methodology behind your research?

Sean Callaghan: The standard methodology for estimating the scale of FGM in a diaspora context is to take the migrant population and multiply it by the prevalence of FGM in the country of origin. The result is then adjusted to take into account the impact of migration on the practice. So for example, if there are 100 Somali girls living in a neighborhood and the prevalence in Somalia is 98% then we assume that 98 of those girls are potentially at risk of FGM. We then adjust that number to take into account the impact of migration. If we assume that migration has in fact halved the risk then we would estimate that 49 girls are at risk.

We can obtain good population estimates from the US Census Bureau and good prevalence estimates from the Demographic and Health Surveys and Multiple Indicator Cluster Surveys. The real research is on how much migration impacts the risk.

AHA Foundation: Your work isn’t over yet, but, in brief outline, what has your research found?

Sean Callaghan: I have completed the first part of that estimate—the migrant population multiplied by the prevalence in country of origin. Broadly speaking, my analysis suggests that there could be as many as 600,000 women and girls potentially impacted by FGM living in the U.S. About 70% of those were born overseas, most of whom would have migrated to the US after they were cut. The other 30% were born in the US. It is that 30% that we really are interested in. How at risk are they in the US?

80% of those impacted by FGM in the U.S. come from 7 countries of origin: Egypt, Somalia, Ethiopia, Nigeria, Indonesia, Sudan and Liberia. 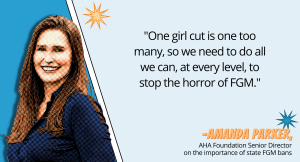 AHA Foundation: Why are your figures on FGM in the U.S. different from those given by the CDC?

Sean Callaghan: CDC published similar research in 2016 based on population estimates from the 2012 census data set in which they estimated that 513,000 women and girls were impacted by FGM in the U.S. My research updates the CDC data in a number of ways: (1) the population data is drawn for the 2015-2019 census estimates, (2) I use a more nuanced prevalence data calculation, and (3) I included a number of countries of origin that CDC excluded from their analysis, most notably Indonesia and Malaysia.

AHA Foundation: Have any findings really surprised you in the course of your research?

Sean Callaghan: The biggest surprise was in where people are. I had assumed the FGM would be concentrated in the urban centers of the big metropolitan areas but the analysis shows that there are a lot of practicing communities in smaller towns and suburban areas. This is partly a result of the refugee resettlement program that placed people from FGM-practicing countries in these smaller towns.

AHA Foundation: How does your research, which might seem abstract in its data-centric approach, relate to work around FGM on the ground?

Sean Callaghan: Around 500,000 women in the U.S. are thought to be living with FGM already, while the rest of the potentially impacted population would be considered at greater or lesser risk of FGM (depending on how much that risk is mitigated by living in the U.S.). This means that there are larger maternal- and mental-health needs than child protection needs. My geotagging of the data also highlights which communities these women and girls reside in.

AHA Foundation: What do you hope to achieve with your research once it is finished?

Sean Callaghan: I hope to be able to answer the risk question: how much are children born in the U.S. at risk if their parents migrated from an FGM-practicing country? In my high-risk scenario, that number could be significant. In my low-risk scenario, it could be as low as 5% of those currently considered at risk.

AHA Foundation: In August, a notable, federal FGM vacation-cutting trial is scheduled to begin in Houston, Texas. What does your research show about this area? 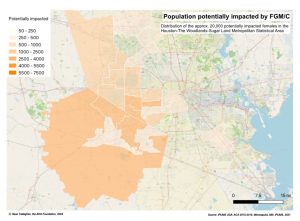 Sean Callaghan: About 8.5% of the women and girls impacted by FGM in the U.S. live in Texas, mostly in the Dallas and Houston metropolitan areas. It is estimated that about 20,000 of those women and girls live in the Houston-The Woodlands-Sugar Land Metropolitan Statistical Area, placing the city in the top ten for FGM risk/impact in the United States for the first time. The most significant communities of practice in Houston identify as Nigerian, Egyptian or Ethiopian. Furthermore, there is a sizable Dawoodi Bohra [a Shiite sect that practices FGM] community in Houston.

AHA Foundation: Thanks for speaking to us today, Sean, and also for your vital work.

Sean Callaghan: No problem. I just hope my research helps to one day completely eradicate the gender injustice that is FGM.