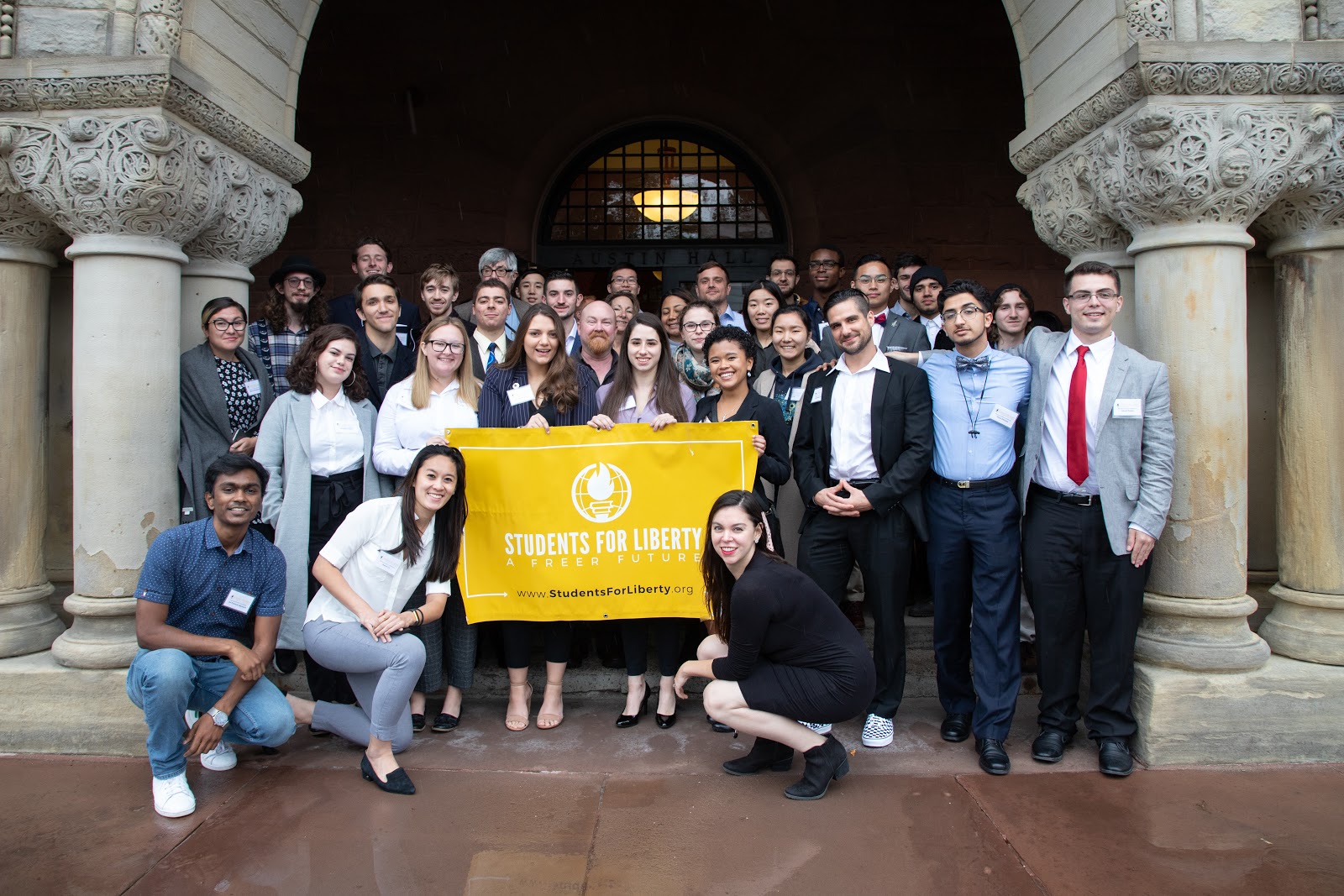 Natalie Le, author of this blog,  is a student at Harvard University pursuing a master’s degree in government. She is a Critical Thinking Fellowship (CTF) Fellow for the AHA Foundation and a Conference Director for Students For Liberty, a student organization at Harvard University. Prior to joining CTF and Students For Liberty, she worked as a Legal Intake Officer for the American Civil Liberties Union (ACLU) of South Carolina.

I recently organized the Students For Liberty Harvard Conference, one of the largest libertarian initiatives for students I have led throughout my grassroots career. The conference focused on social issues that receive support across the political spectrum, such as protection of individual freedoms against extremism and oppression.

My intent for this event was to provide student activists and professionals a platform to understand the heart of the issues, engage in civil discourse, and build a network. More importantly, I hope that the conference ignites people to make those efforts realized because, while it is fruitful to discuss these ideas, without action, these problems will continue to permeate our community.

With the amazing support of the Critical Thinking Fellowship — a joint effort between the AHA Foundation and Ideas Beyond Borders — we were able to organize this large initiative and invited thirteen prominent speakers of the liberty movement to share their message of hope and empower activists to continue protecting individual freedom and address the increasing appeal of authoritarianism among some college students. 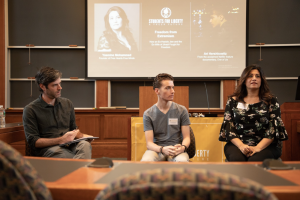 Ari Hershkowitz and Yasmine Mohammed listen to questions from the audience.

The first panel, “Freedom from Extremism: How an Ex-Hasidic Jew and the Ex-Wife of Jihadi Fought for Freedom,” featured Ari Hershkowitz from the acclaimed Netflix documentary, One of Us and Yasmine Mohammed, a forced marriage survivor, college professor, and activist. Both revealed how they left ultra-religious communities where they were oppressed, and the difficulties of acclimating outside of those enclaves.

Mohammed shared how she was forced into a marriage with an Al-Qaeda member and escaped the Islamic fundamentalist household with her daughter after her ex-husband was captured by Canadian authorities. Hershkowitz described how he fell victim to abuse and was deprived of education due to how closed off the Hasidic community is from the outside world. While these two came from different walks of life, what they have in common is their passion for individual freedom and advocating for its protection. 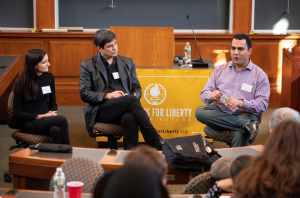 Faisal Saeed Al Mutar elaborates on his journey to the U.S.

The next panel excompasses the same idea but with a focus on tyrannical governments that just don’t work. Entitled “Escaping from Authoritarianism,” the closing keynote features Faisal Saeed Al Mutar, the CEO and Founder of Ideas Beyond Borders, and Laura Nicolae, the President of the Harvard Libertarian Club, with Reason Magazine Editor-at-Large, Nick Gillespie, as moderator.

Al Mutar described his upbringing during Saddam Hussein’s regime; he escaped to the U.S. as a refugee, and founded a non-profit that focuses on promoting open dialogue and inquiry with the goal of preventing authoritarian narratives from taking root. Nicolae shared her parent’s story of how they escaped from communism during the Bolshevik Revolution and criticized an emerging appeal for this dangerous ideology among some students and their disdain for capitalism, even though they themselves participate in capitalist mechanisms. These stories further remind us that authoritarianism suppresses personal freedoms and that we ought to be concerned of its increasing appeal to many.

The conference drew nearly 100 attendees and was well received. Partner organizations, such as the Foundation for Individual Rights in Education (FIRE) and The Atlas Society, provided resources to young activists to help educate and mobilize people on these important issues. Attendees walked away with an appreciation for the compatibility of social justice and classical liberalism and the desire to create change. We encouraged everyone to continue to discuss these ideas outside of the conference and find ways to implement them into action. 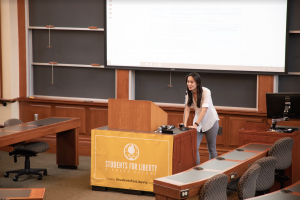 CTF fellow Natalie prepares the room for the next panel of speakers.

Despite how controversial and uncomfortable these ideas are, we need to be challenged and tolerate thoughts and opinions that are in conflict with our belief system. We can only be stronger activists if we open ourselves to other ideas and criticisms and learn from others on how we can mobilize in the most effective way possible. By transforming these ideas and realizing our passions, we can inspire the rest to pursue a freer society.