Penn State Students Fight to End FGM From Their Classrooms

A group of talented and determined students from Penn State’s Dickinson Law have taken up the challenge of protecting women and girls in their state and globally. This group, including Robert Daniell, Lindsay Daniels, Alexia Tomlinson, Erin Varley, and Dermot Groome, Esq., have worked tirelessly to develop state female genital mutilation (FGM) legislation, as well as an international protocol to address FGM on a global level. This April, the students are organizing a conference hosted by Penn State’s Dickinson Law on FGM. They also have formed a working group with leading experts from a variety of fields that will come together to discuss an international FGM protocol.

AHA Foundation: How did your team become interested in the issue of FGM?

Erin Varley: In the Fall of 2016, most of us took an International Enforcement of Human Rights seminar course taught by Professor Dermot Groome. Part of the course required a thesis. I have always been passionate about addressing gender-based violence and chose to write about FGM.

After presenting my paper, Professor Groome noted it was odd that there were not a Convention, Protocol, or other documents that specifically prohibited FGM worldwide. He then challenged me to address that legislative gap.

In response, I recruited several other individuals that had a passion for addressing FGM. They generously agreed to give up many nights and weekends to work on the issue. We soon realized Pennsylvania did not have a law prohibiting FGM, so we decided to focus our work at the state and international levels. Soon after, we founded The FGM Legislation Project.

AHA Foundation: You are looking at this issue from both a state-based and international perspective. For your own state of Pennsylvania, what is the situation of FGM?

FGM Legislation Project Team: Pennsylvania is now in the minority of states that do not have a law specifically prohibiting FGM. The CDC (Centers for Disease Control and Prevention) estimates at least 19,000 girls and women living in Pennsylvania have undergone FGM or are at risk of FGM.

“….there are concerns that Pennsylvania may become a ‘destination state’ for FGM procedures.”

Three Pennsylvania locations rank in the top 50 high-risk FGM metro areas in the United States (Philadelphia/Camden/Wilmington-8th; Harrisburg/Carlisle – 35th; Pittsburgh – 48th). Almost completely surrounded by states that prohibit FGM, there are concerns that Pennsylvania may become a “destination state” for FGM procedures. Thus, it is critical that Pennsylvania take action designed to protect girls and women who may be subjected to FGM.

Currently, Pennsylvania has a House Bill, H.B. 413, pending before the House Judiciary Committee. Authored by Representative Thomas P. Murt, it seems possible H.B. 413 will move forward in a few months. It is our hope we can continue to work together with Rep. Murt to promulgate the bill and potentially add additional provisions.

“Pennsylvania is now in the minority of states that do not have a law specifically prohibiting FGM.”

AHA Foundation: What is your advice for future legislation?

Our recommendation for future legislation in Pennsylvania, or anywhere, includes comprehensive legislation designed to holistically address FGM. Ideally, we believe that an FGM law should include:

a. A criminal provision that comprehensively defines FGM and indicates custom or consent is not a defense;
b. A reporting mechanism;
c. A civil remedy for survivors;
d. An education and outreach mechanism, with funding attached, to engage communities, implement services and solutions, and prevent FGM; and
e. A list of provisions where “female genital mutilation” should be included in other portions of a state’s legislation.

AHA Foundation: You are developing an international protocol to prohibit FGM. What has the research to develop this looked like and what are the main provisions you are looking to include?

FGM Legislation Project Team: To develop our Protocol, we researched a wide variety of U.N. (United Nations) conventions to ascertain appropriate language and provisions. We also reviewed protocols that addressed issues similar to FGM and tracked articles within these conventions and protocols that would be relevant to our work. 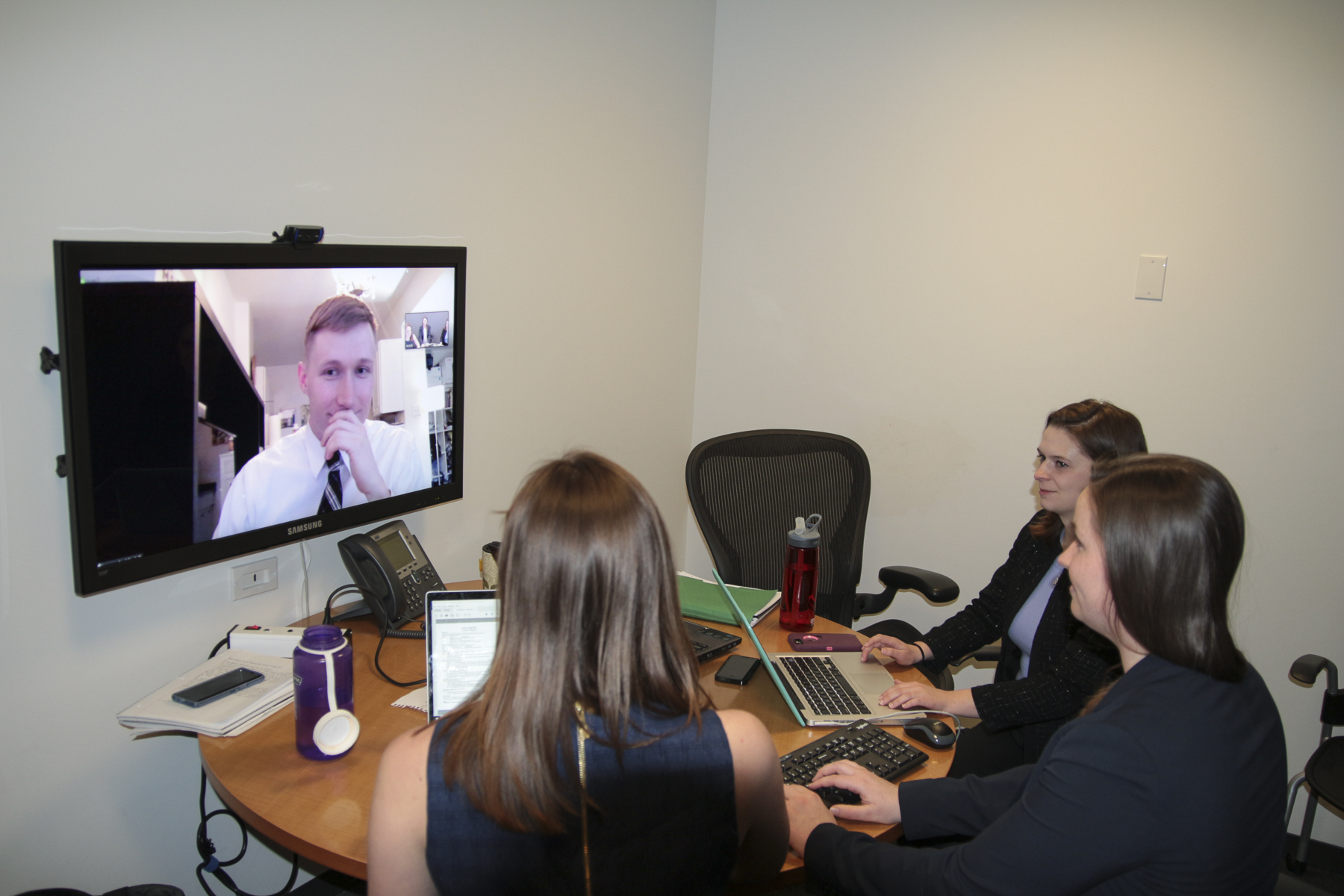 Next, we reviewed all U.N. resolutions addressing FGM, as well as FGM decisions from the Commission on the Status on Women and the African Union Assembly. Finally, we referenced the Maputo Protocol to the African Charter on Human and People’s Rights, which specifically bans FGM in Sub-Saharan African nations. The Maputo Protocol and African Charter were particularly helpful as we developed our Protocol language.

Preliminary feedback from our Protocol Working Group indicated we would benefit from developing a Protocol Commentary. Our Protocol Commentary will discuss our Protocol and its purpose, explain how its provisions should be interpreted, and provide insight to anyone interested in the Protocol’s development. Thus, we are researching a variety of commentaries and beginning the commentary drafting process now.

The Protocol’s main goal is to create an international document that specifically prohibits FGM. We think addressing FGM from a holistic, survivor-driven perspective is best, so we think the most important Articles ask State Parties to:
a. Criminalize FGM;
b. Establish comprehensive and culturally sensitive initiatives to cooperatively end FGM; and
c. Provide services, support, and remedies to FGM survivors.

AHA Foundation: What will be the next steps after the Protocol Commentary is finalized?

FGM Legislation Project Team: Once the Protocol text is finalized, we hope to present it to the appropriate U.N. bodies for consideration. Ultimately, we hope it would be ratified and signed by CEDAW (Convention on the Elimination of All Forms of Discrimination Against Women) State Parties. However, part of our Working Group sessions will discuss next steps once the Protocol text is finalized. We are excited to hear our Working Group member’s thoughts and ideas.

“…our conference is designed to address FGM from a multi-disciplinary perspective. We wanted to incorporate survivors’ voices, legal solutions, medical knowledge, and a wide variety of service providers and FGM experts in the day’s discussions. It is our hope that these diverse professionals will foster innovative solutions while cultivating a more unified approach to addressing FGM.”

AHA Foundation: Tell us a bit about the conference that you will be hosting in April? 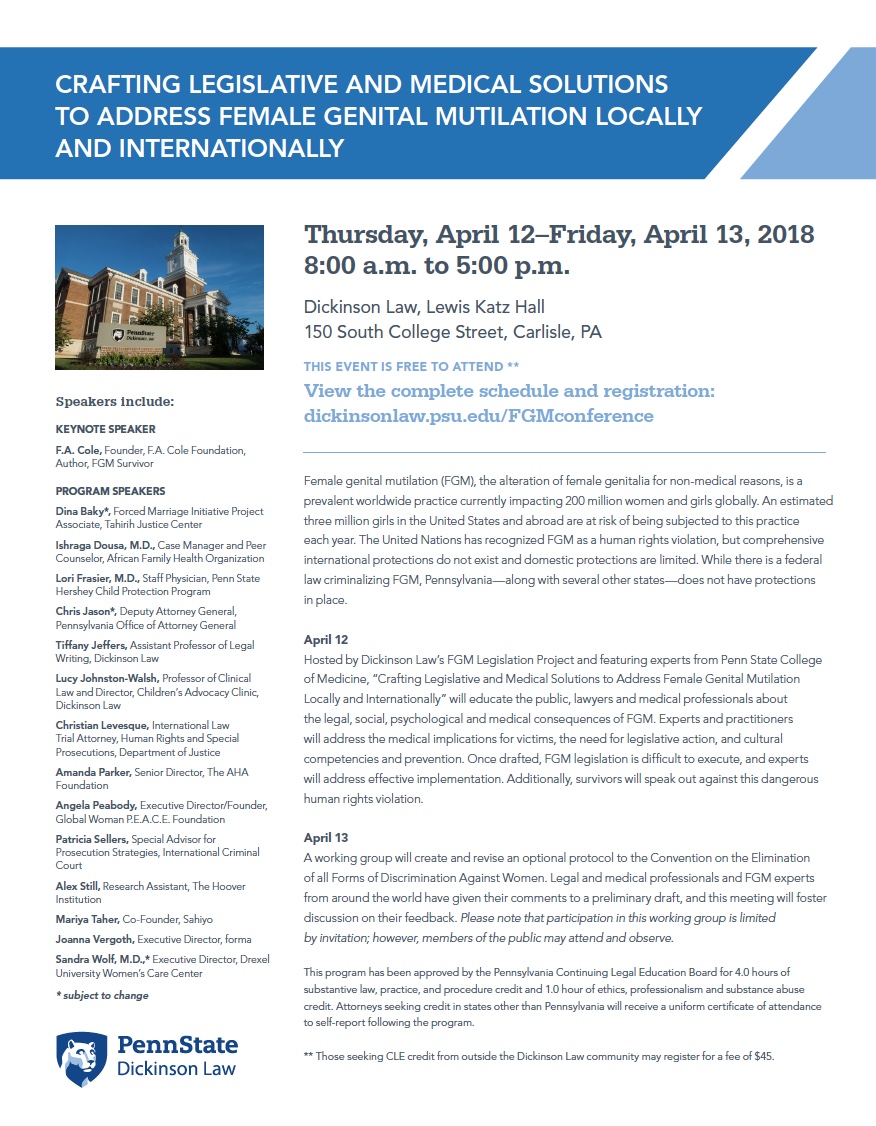 FGM Legislation Project Team: We decided to host a conference to educate our local community about FGM, inform Pennsylvanians about the need for legislation in the U.S., and engage the international community as we develop our Protocol.

Thus, our conference is designed to address FGM from a multi-disciplinary perspective. We wanted to incorporate survivors’ voices, legal solutions, medical knowledge, and a wide variety of service providers and FGM experts in the day’s discussions. It is our hope that these diverse professionals will foster innovative solutions while cultivating a more unified approach to addressing FGM.

AHA Foundation: What research did you do to prepare in advance for the conference?

FGM Legislation Project Team: In addition to the research mentioned above, we worked closely with Alex Still from the Hoover Institution and Amanda Parker from The AHA Foundation to identify speakers and groups to engage in the conference and the Working Group. We have also continued developing our knowledge of FGM and the ways local and international communities can aid in FGM’s cessation.

AHA Foundation: What is the goal of your working group sessions?

FGM Legislation Project Team: Our primary goal from the Working Group sessions is to emerge with a polished Protocol ready for consideration by the appropriate international and U.N. bodies. We also hope to develop a strategy for the Protocol’s promulgation and finalize the list of documents that we need to create to accompany the Protocol.

The AHA Foundation has been honored to support the students throughout their work and are excited to both speak at their conference and participate in the working group this April. You may register here for the FGM conference at Dickinson Law.