University of Connecticut: Free Speech and Minority Rights: Perspectives of a Danish Blasphemer and an American Homosexual 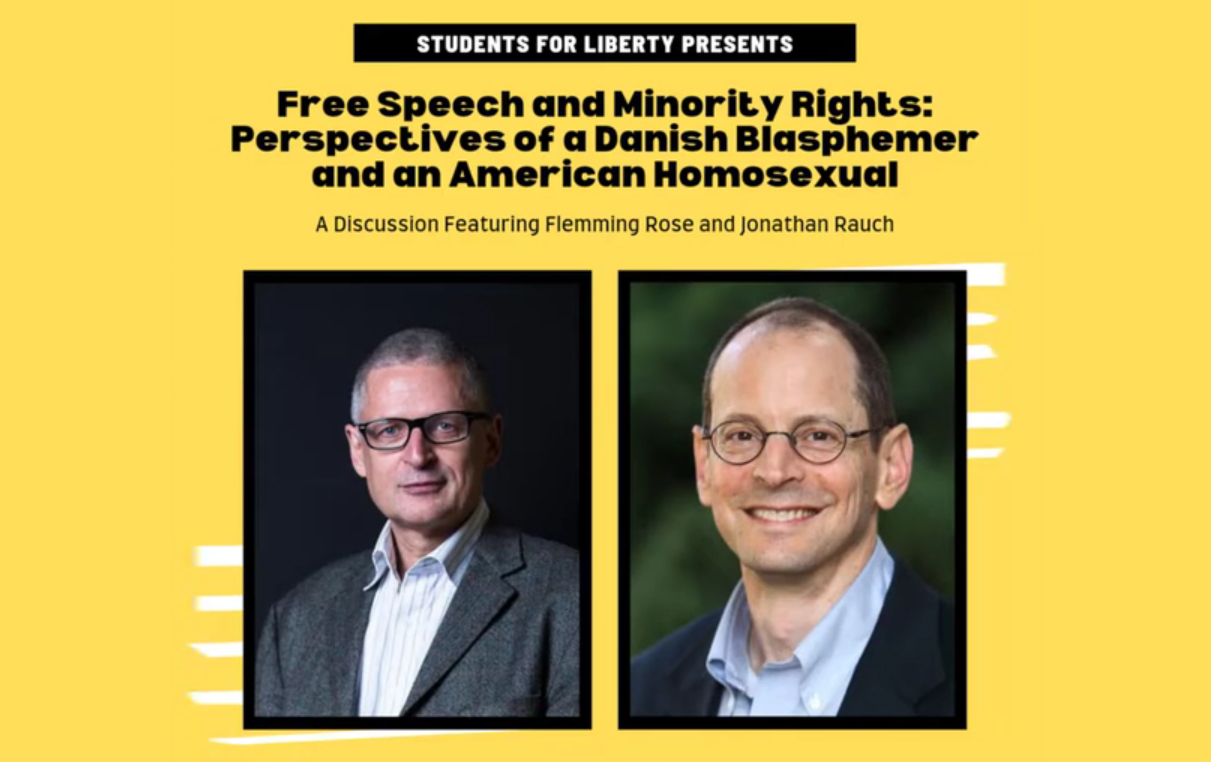 Event Description:  This panel, “Free Speech and Minority Rights: Perspectives of a Danish Blasphemer and an American Homosexual” featured Jonathan Rauch, Senior Fellow of the Governance Studies at the Brookings Institution and author of Kindly Inquisitors alongside Flemming Rose, a Senior Fellow at the Cato Institute and author of the book The Tyranny of Silence. Isadore Johnson, the Critical Thinking Fellowship fellow, moderated the discussion and asked questions.

The panel started with Jonathan Rauch talking about his experiences advocating for gay rights in the United States in the 1990’s. He starts by talking about how the world when he was a kid was very different, and not ideologically open to the idea of gay marriage and equality. Jonathan talked about his personal experience deciding to advocate for gay marriage and how his loved ones tried to convince him that advocating for equality would ruin his credibility as a journalist. He pointed out that this change in attitudes came from somewhere, and that somewhere was free speech. By making the unpopular argument for gay marriage, he managed to change the hearts and minds of people opposed to it. He argued against the new concept of criminalizing hate speech. Saying if they had existed, they probably would have been used to silence his free speech that advocated for his rights previously. In fact, the government tried to ban the first openly gay magazine, and in other countries has often targeted gender and sexual minority’s speech before anyone else’s.

Then, Flemming Rose shared his experience that made him a free speech icon. Flemming noted that speech can be hurtful and painful, and that proponents of free speech should acknowledge that. Despite words being able to cause harm, they should not be equated with violence, and this false equivalency is dangerous. Rose is a former foreign correspondent for the Soviet Union for 14 years and during his time abroad he worked with dissidents and was exposed to how regulation of speech is harmful to minority groups.

After his stint in the Soviet Union, he worked as an editor in a Danish newspaper called Jyllands-Posten. He was surprised at the level of self-censorship present in the European culture, and wanted to combat that. He held a competition at the newspaper asking for people to illustrate photos of Mohammad and many artists did not want to attach their names because of the fear of violence. Three months later, violence erupted at Danish embassies, and Al-Qaeda attacked the embassy in Pakistan. Some of those who republished the cartoons were killed, and even years later there are still threats against his life. He argues that free speech is not the norm, but is instead a rare creature that is a tool for social progress, but is counterintuitive and those in power often dislike it, regardless of their ideological affiliation.

A question was raised about whether free speech was a legalistic or cultural norm and the ramifications associated. Jonathan argued that free speech needs to be both cultural and legalistic in that it’s important that punishment cannot be administered by the state, but other institutions can also chill speech. Flemming Rose argued that legalistic protections and cultural protections can augment each other, but ironically sometimes the culture can be a counterbalance against legal freedoms and vice versa. He explained that it’s culturally freer to talk in other countries, but the United States has a weaker culture of dissent.

The discussion continued for a while about other nuances of freedom of expression and audience questions were sustained towards the end. 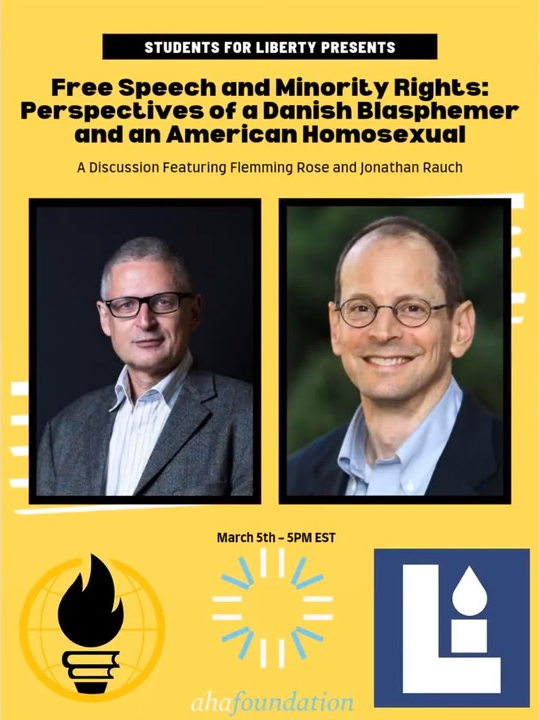