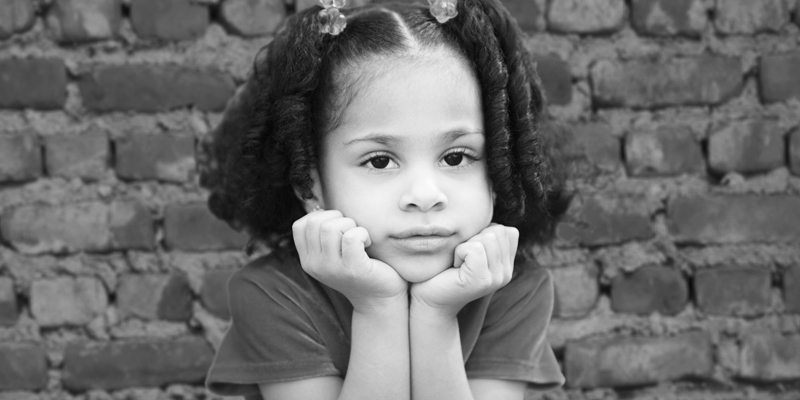 Summer is the season of vacation cutting. Many girls living in the US will be taken to countries abroad to undergo female genital mutilation.

Two girls leave the same third grade class for summer vacation. One is headed to summer camp and, in August, her family has a trip to Disneyland planned. For the next three months she will spend her days exploring, discovering and creating new worlds of infinite possibility in her mind. For the next three months, she will get to be a kid doing what kids do best in summertime.

Her classmate is going on summer vacation too. She is headed to the country of her parents’ birth to meet extended family. She is excited, and maybe a little scared, to meet so many new and unfamiliar playmates. What she doesn’t know is that there is an alternate purpose for this trip. This summer she will undergo what is known as “vacation cutting”; the practice of taking women and girls abroad to undergo female genital mutilation (FGM).

Despite having been made illegal at the federal level in 2013, vacation cutting remains an all too common practice for American residents and citizens seeking the procedure for their daughters and other family members. With FGM’s long and uncertain recovery period, summer vacation in particular provides a perfect opportunity and cover up for a trip that has FGM on the itinerary.

Even within America there exist many insular African and Middle Eastern communities where FGM is seen as a critical step in controlling the sexuality and preserving the so-called honor of women. Often, families fear that their daughters will be un-marriageable within the community or will bring shame to their family if they are not subjected. For others, FGM is a step in helping to retain traditional values as a safeguard against American culture. Even though some community members may disagree with the tradition, many often look the other way because they are afraid of speaking out, and still others may not know they have the option of reporting the crime or pressing charges. These mentalities leave an estimated 507,000 American girls vulnerable to FGM, a number that is on the rise. 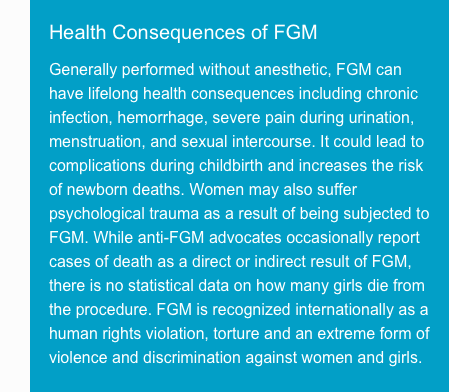 Classified by the World Health Organization into four overarching types, FGM often involves the removal of the clitoris and one or both sets of labia. It is generally performed without anesthetic on girls from infancy into their teens. The vaginal opening is then often sewn shut, leaving only a small hole. Aside from the staggering pain during and after procedure and immediate risks, long-term physical consequences include increased risk of childbirth complications, risk of infection and cysts, and pain during intercourse, which often involves a forced opening of the scar tissue. There are no physical health benefits to the practice. The long-term psychological consequences resulting from the trauma are common.

Under President Obama’s 2013 legislation, those found guilty of knowingly transporting a girl out of the country for the purpose of undergoing the procedure can be sentenced to up to five years in prison, the same penalty in place for those who commit FGM within the United States.

Due to the silence surrounding FGM, these restrictions remain easy to dodge, leaving many girls vulnerable to the practice, usually against their will and with little prior knowledge of plans for the procedure. During the summer, it is simple for many families to slip away without much question, returning to America with daughters who have been forcibly, painfully and irrevocably changed.

The AHA Foundation has continually been on the frontline of advocating for these girls; school age children living within a system that remains ill-equipped to counter the unique risks they face. Ayaan Hirsi Ali, founder of the AHA Foundation, specifically consulted with Representative Joseph Crowley on the issue of vacation cutting, and expressed our support for the language contained in the 2013 Bill. The AHA Foundation has also worked closely with many U.S. states in the creation of legislation that would make in-state FGM illegal, as well as transportation out of state for the purpose of conducting the procedure. 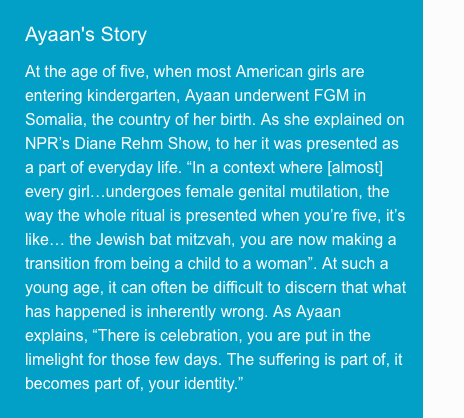 Properly training educators and advocates working directly with at-risk girls, their families, and their communities is key to enforcing these laws and changing the underlying beliefs that perpetuate this human rights abuse. With more resources to recognize the warning signs, and an education on how to best approach families and communities, teachers can be better equipped to protect their students.

Often though, awareness and the breaking of the culture of silence surrounding the issue is a critical first step in galvanizing much-needed public support, which is still lacking in the US. In a recent article for Cosmopolitan, Amanda Parker, Senior Director of the AHA Foundation, explained, “Every time I talk to people about the work we do with regards to FGM, the response is always shock: ‘That happens here (in the US)?’ I think we are up against a big learning curve.”

For the American girls whose summer vacations will be spent not at camp or Disneyland, but recovering from this horrific procedure, the awareness that this can and does indeed happen to girls here is not a question, but a fact that is all too real.

If you too are horrified and saddened that little girls in the US are forced to endure this excruciating procedure, please support the work of the AHA Foundation to bring an end to this form of violence and torture against girls. We need your help to make this a safer place for the half million girls and women at risk right here in our own neighborhoods.