With her First Novel, “Stained,” Abda Khan Gives Voice and Hope to Thousands Suffering in the Name of Honor

AHA: What inspired you to write your novel, Stained?

“I feel very strongly about the fact that…giving a voice to these women is important, through whatever means.”

Ms. Khan: It was predominantly my experiences of living and working in areas with a largely South Asian and Muslim diaspora, and in particular it was the problems faced by the women in these communities that spurred me to write Stained. I am a lawyer by profession, so I do not have any creative writing background, but I just felt as though the lack of diversity in fiction nowadays, coupled with the real life stories that I had come across over the years, was a good enough an incentive to pen the novel, and bring to the fore these complex issues of sexual crimes, honor, identity and so on through the medium of fiction.

I feel very strongly about the fact that these very real problems are often ignored, not only by the community itself in which they occur, but by society at large, and certainly by the publishing industry, and giving a voice to these women is important, through whatever means.

AHA: Do you have any particular experiences with yourself, friends, or family about honor violence or trying to maintain and preserve family honor? How are these women or girls affected by this?

“So the very people they should be able to trust the most – their family – are the ones who let them down in such a dreadful way.”

Ms. Khan: Whist Stained is a work of complete fiction, I have personally seen and heard of many appalling examples of things done and said in the name of ‘honor’. Most of the time, the girls or women do not tell anyone about their suffering for fear of tarnishing the family honor. The few who do are usually made to feel like the rape or sexual/physical assault was their own fault – they are made to feel like they are to blame, and consequently ostracised and disregarded. And if the women try to rebel against what they see as the unfair cultural restrictions that are placed on them, then they suffer emotional and physical violence, masked as necessary in the name of ‘honor’.

“If they do speak out, they run the risk of violence against them.”

So the very people they should be able to trust the most – their family – are the ones who let them down in such a dreadful way. Often these women feel isolated; they don’t think they have anyone to speak to, and sadly that is usually the case within their community. If they do speak out, they run the risk of violence against them. All of these issues can lead to untold problems for the victim. Most of them do not seek help (such as counselling) at the time, and this can lead to a lack of confidence in the people and the world around you, emotional breakdowns, difficulties in forming trusting relationships, social isolation, long term (and often undiagnosed) depression or worse.

AHA: Was there a moment or collection of moments and experiences that helped you reach the decision to write this book? 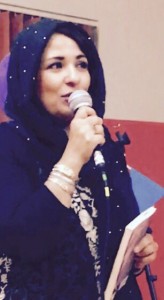 Ms. Khan: It was a combination of a couple of factors; the build up of all the stories over the years, but also the fact that I was browsing in my local bookstore one day with these stories in the back of my mind, and noticed I couldn’t find a single novel that reflected these girls and women, and their problems.

AHA: What do you hope readers who are unfamiliar with honor violence will take with them from your book? What about girls who are at risk of honor violence?

Ms. Khan: I have already had incredible feedback from readers who are not part of the communities that the novel depicts; they have told me that the book gave them an insight into issues (especially honor) which they knew nothing of before. The book has a very positive conclusion, and I hope the Selina’s story will inspire and give courage to any women or girls who are at risk of honor violence to seek help and feel they are not alone.

AHA: What can we do to reach out and support women and girls who are suffering from emotional struggles due to maintaining honor?

Ms. Khan: Much is being done, by various organisations, like the AHA Foundation in the USA, and many charities and official state organisations in the UK. But much more has to be done on the grass roots level. I went on a television show a few months back in the UK, and was co-interviewed with a woman from SARCS (Sexual Assault Referral Centres). The aim was to get the message out there that if you suffer a rape, sexual assault or other honor crime there is confidential help available out there if you do not feel able to confide in your family (and a lot of the time a member of the family is the attacker), your friends (sometimes the victims are not allowed friends) or other members in the community.

Women often think that if they go to any sort of an official organisation they will be pressured to involve the police or take some action, and they are too frightened to do this. But this is not so. Over here in the UK, SARCS Victim Support and Rape Crisis Centres can all offer confidential assistance that could help the woman access vital services (medical help, counselling) completely confidentially, and even access to safe housing, benefits etc. if the woman wanted to leave her home if this where she was suffering. In the UK, there were over 11,000 reported honor based crimes from 2010-2014; these are figures from just 39 out of 52 police forces – most honor crimes are not reported, so it is easy to conclude that these figures, appalling as they are even as they stand, are just the tip of the iceberg. However, at least the UK acknowledges the problem and is doing something about it, even though much more has to be done.

“The US seems very reluctant to address the idea that that violence in the name of “honor” happens in the country.”

But in the US, data on honor violence is practically non-existent. Law enforcement officials acknowledge that many don’t even have a working definition of honor crime/violence. As far as I am aware, there are no official attempts to collect data on any kind of “honor” violence, including murders. So for example, where a young woman is killed by her father in the name of the family honor because she refused to marry the man he chose for her, this is simply classed as a ‘murder’ instead of an honor crime. This cannot be right. The US seems very reluctant to address the idea that that violence in the name of “honor” happens in the country. I have read that many people worry that focusing on these problems will lead to increased anti-Arab and anti-Muslim sentiment. But the failure to acknowledge this on an official footing is only making the problem worse. As with any problem, acknowledging the problem is the prerequisite to then dealing with it.

Above all, we have a duty to provide for victims of honor crimes, easily accessible, confidential help, to include counselling and other necessary therapies, and a safe means of escape if they wish for this. And if they want to prosecute their attacker, we need to be able to support the victim from beginning to end, and beyond the legal process. Once we have all of these measures in place, through state run and charitable organisations working hand in hand, then we must make sure that the women who are suffering receive the message loud and clear about the help that is there for them.