When Ayaan Hirsi Ali, founder of the AHA Foundation, underwent female genital mutilation (FGM) in her native Somalia, she was five years old. To her, a child of just kindergarten age, this painful and risky procedure was presented as a celebration. In her bestselling memoir Infidel, she recounts, “A special table was prepared in [my Grandma’s] bedroom, and various aunts, known and unknown, gathered in the house”. As a result, when the time came for the procedure, Ayaan, “was not frightened, just curious. I had no idea what was going to happen, except that there was a festive atmosphere in the house and [I, my sister and my brother] were going to be cleansed.”

For the more than 125 million women and girls worldwide who have undergone the procedure, FGM is often presented in this way; as a rite of passage carried out to guarantee purity and consequently a marriage. The reality though is starkly different. Ayaan describes how, when she underwent FGM, two women held her legs apart, while the man performing the circumcision, “who was probably an itinerant traditional circumciser from the blacksmith clan…caught hold of the place between my legs and started tweaking it, like Grandma milking a goat. Then the scissors went down between my legs and the man cut of my inner labia and clitoris. I heard it, like a butcher snipping the fat off a piece of meat. A piercing pain shot up between my legs, indescribable, and I howled. Then came the sewing: the long, blunt needle clumsily pushed into my bleeding outer labia, my loud and anguished protests.”

After the procedure, “the circumcision was not discussed at all. It was just something that had happened – had had to happen. Everyone was cut.” Otherwise, the cultural beliefs are that, “uncircumcised girls will be possessed by devils, fall into vice and perdition, and become whores.” 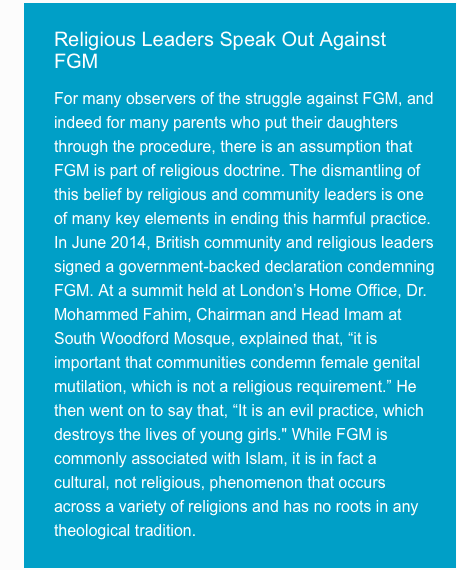 Despite being illegal in America, an estimated 507,000 girls remain at risk, partially due to the troubling culture of silence surrounding the practice. In communities with strict honor codes, speaking out about and against FGM is seen as betrayal. Women with not only the bravery, but the mere opportunity to break the silence without fear of reprisals are both rare and crucial to the movement to stop FGM.

One such woman is Hawa, a New Jersey native with parents hailing from Senegal, who spoke to Cosmopolitan Magazine in 2014 about her experience with FGM. Hawa is a survivor of vacation cutting, an illegal practice that is common during the months of summer break. She was sent to visit her parents’ family in Senegal at the age of 16, unaware that the secret purpose for the trip was FGM. As she explained in the interview, “When my turn came, I begged them to leave me alone. I knew this will be illegal in America — there is no way my government will let you tie down a girl and cut her without any medication.”

Even though it is a grave human rights abuse, many Americans remain unaware of exactly what FGM entails or even of its prevalence in their own neighborhoods and cities. Ranging from partial or total removal of the clitoris in its mildest form to infibulation (the removal of all external genitalia and sewing of the two sides of the vulva so that only closed scar tissue remains) at its most extreme, FGM has no health benefits and carries a host of physical and mental health risks and consequences.

When viewed through the lens of cultural traditions that equate female sexuality with shame, it is little wonder that women at risk feel they have few channels to speak out and seek help. With a training program for law enforcement and service providers likely to encounter victims of FGM in their line of work, and a long history of legal advocacy success, the AHA Foundation strives to provide such an outlet.

Another important voice is the Foundation’s fellow advocate Jaha Dukureh, a native of the Gambia currently living in Atlanta. Last year, Ms. Dukureh launched a Change.org petition asking President Obama, “to take the essential first step of commissioning a report on the current statistics of women in the US impacted by FGM and the girls at risk of being mutilated.” Due to the efforts of Ms. Dukureh and the widespread attention they received, the petition was successful in convincing the Obama administration to commission such a report.

Both Ms. Dukureh and the AHA Foundation are keenly aware that, without broad public knowledge of the issue, there is little chance that the long-term political and cultural changes needed to end the practice will be made. While the individual voices of those who have undergone and survived FGM are critical, broad public support is necessary to end the practice once and for all.

You can make a world of difference in this struggle to give voice to the fight against FGM. Honor women and girls who found strength to break the silence by sharing their painful experience – in order to stop FGM from hurting even more girls. Renew your support of the AHA Foundation to help stop FGM and other harmful traditional practices.