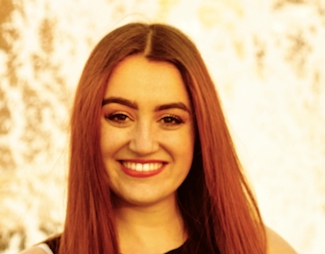 During her fellowship with AHA Foundation’s Critical Thinking Fellowship (CTF) campus program, Alana Krafsur organized the most successful CTF event to date, at Texas Tech University in Lubbock, Texas. Her event Female Genital Mutilation: A Survivor’s Story had over 300 attendees and significant media coverage in the local news. In this blog, she looks back at her experience with CTF describing the highs and lows of running speaking events that attempt to engage students in critical thinking.

AHA Foundation: You became a fellow of AHA Foundation’s campus program in 2019. Why did you decide to join the program?

Alana: I decided to join the program for a range of reasons. I learned about female genital mutilation (FGM) while taking a digital public relations class when I was an undergraduate student at Texas Tech University. I remember feeling shocked that FGM existed and wondered how I could get involved to help end this practice. A couple of years later, as a graduate student, I chose to research communications campaigns working to combat FGM and I came across AHA Foundation. A couple of emails and video calls later, I was excited to gain the opportunity to work as an intern and soon after being given the opportunity to be a CTF fellow.

“…I knew planning an event on campus was necessary in order to start a conversation [about FGM].” 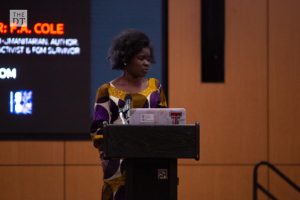 AHA Foundation: In November 2019, you brought FGM survivor F.A. Cole to your campus, Texas Tech University. This event was the most attended in the entire history of our campus program since the inception two years ago, with over 300 in attendance. Tell us about the event. Why did you choose to focus on FGM in the U.S.?

Alana: I chose to plan an event that focused on FGM in the U.S. because many people are unaware that this practice happens or assume that it only exists in third world countries. Texas has one of the highest concentrations of girls at risk of FGM in the U.S., and I knew planning an event on campus was necessary in order to start a conversation.

At the beginning of the event, I mentioned that over half a million women and girls are estimated to be at risk of FGM in the U.S. People were shocked. I mentioned that it would not be surprising if there were girls at our university who were at risk of or who have undergone FGM. I felt that that knowing the proximity of the practice would resonate with my local community.

Someone who embodied what I was looking for as a speaker was F.A. Cole, an FGM survivor, women’s rights activist, award-winning humanitarian, and author. After hearing her story, I knew her voice needed to be heard.

The event took place in a ballroom at Texas Tech University, and the room was filled over maximum capacity with people sitting on the floor and standing in the back. My goal was to have 100-200 people in attendance. I was extremely happy to see over 300 people showed up.

“I mentioned that it would not be surprising if there were girls at our university who were at risk of or who have undergone FGM.” 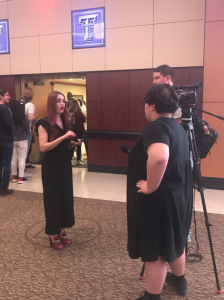 Alana Krafsur being interviewed about her CTF campus event

AHA Foundation: FGM is a topic that is often considered taboo, or inappropriate to talk about. How did it feel seeing that so many people on your campus were interested in hearing from a survivor, and learning more?

Alana: It was the most surreal feeling to see the number of event attendees. My heart was full knowing that so many people wanted to learn more about FGM, despite the topic being uncomfortable for many to talk about. I was proud to see this many students wanting to push through the sensitive subject matter. I got the impression that they wanted to be part of the historic movement to end FGM by starting a conversation and taking action in a multitude of ways.

The attendees were highly engaged for the entire duration of the event. Many were so emotionally invested in the topic that some students were tearing up when hearing F.A. Cole’s story. However, F.A. also had a way of radiating strength and power, which many audience members could feel. This added a sense of hope, which made many people inspired to become involved.

“Many were so emotionally invested in the topic that some students were tearing up when hearing F.A. Cole’s story.”

AHA Foundation: Did you receive any feedback from attendees?

Alana: I received a lot of positive feedback. The event was covered in the media, and many people stated that they would begin conversations about FGM. One event attendee said the event inspired her to start an African Women’s Association on campus where anti-FGM initiatives would be part of their agenda. She believes this initiative will connect her to other FGM survivors on campus.

I spoke with a student from Cameroon, Africa who invited her best friend to the event. After the event, the girl’s best friend confessed that she had undergone FGM. The event inspired her to approach F.A. to talk about her experience which she had suppressed for years.

My sponsors were extremely pleased with the outcome and felt proud to be affiliated with the event. I walked away knowing that I made an impact in my local community and that the event generated a long-lasting impression on attendees.

“I walked away knowing that I made an impact in my local community and that the event generated a long-lasting impression on attendees.”

AHA Foundation: For students who are considering applying for the CTF fellowship, what would you like to tell them about the program?

Alana: I would tell students interested in the program that it offers the chance to not only craft an event on a topic you are passionate about, but it also allows you to make an impact in your local community and expand your skillset. I walked away having educated hundreds of people who were inspired to carry on their newfound knowledge to others. This ripple effect is what makes being a CTF fellow impactful. One person has the capacity to instill change, and that is what being a fellow is all about.

One of the best parts is the CTF program offers training, networking opportunities, and tools to be as successful as possible. The program is life-changing–especially when you choose a topic that you are passionate about. I would recommend the program for anyone who is willing to put in the work to make a long-term impact.

“This ripple effect is what makes being a CTF fellow impactful.”

Interested in joining our campus program and making a change on your campus? Apply here!