“As a Muslim Woman, I Was Told What To Do, What To Think, and Never To Question Islam—I Was Indoctrinated,” CTF Fellow Discusses Leaving Islam 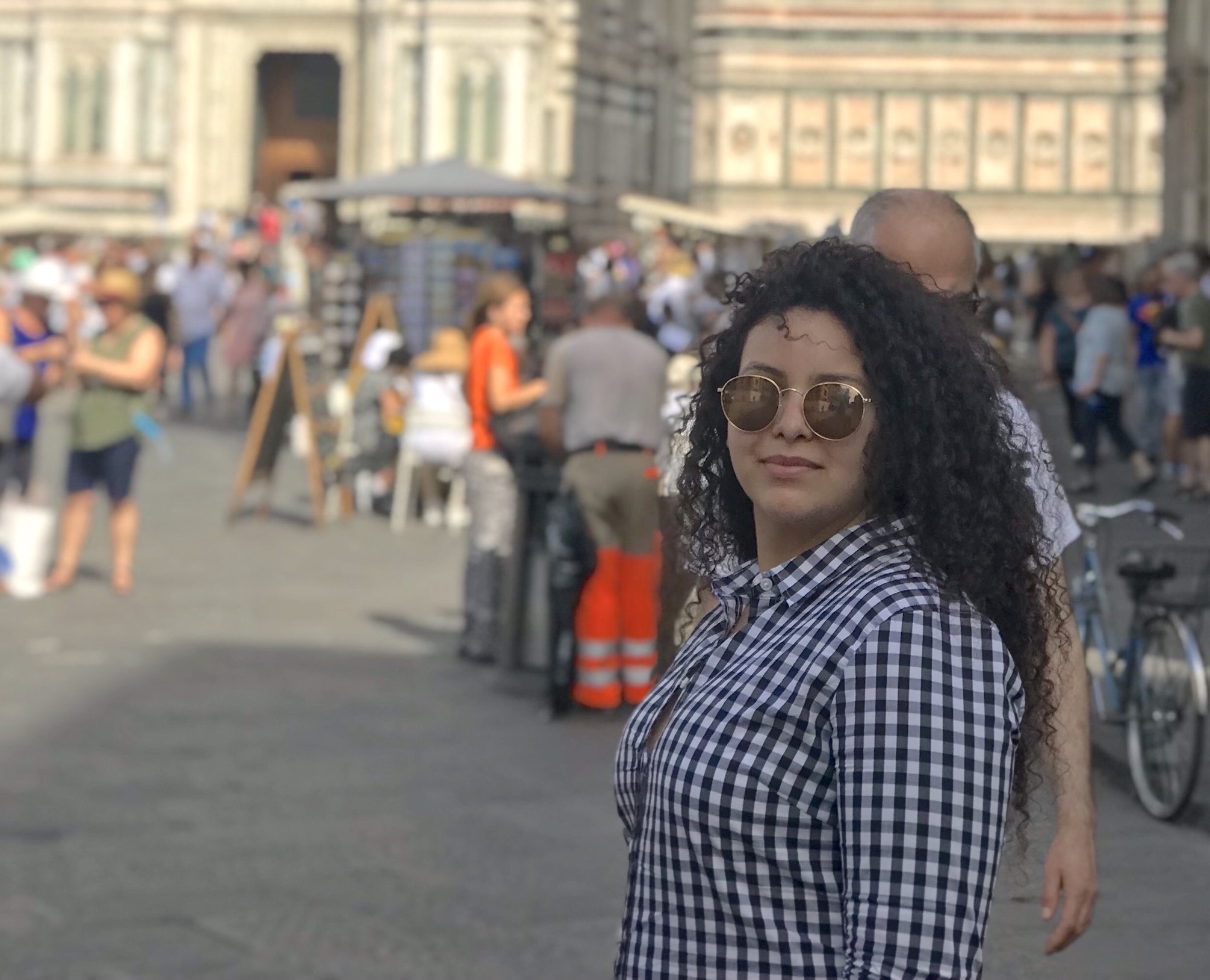 Growing up, Hanna Nour always questioned misogynistic practices within her religion. The older she grew, the more questions she had about women’s rights within Islam. Those questions eventually led her to the Critical Thinking Fellowship, AHA Foundation’s campus program.

As a Moroccan-American and ex-Muslim, Hanna wants to use her voice to explain the downfalls in the Islamic faith as it pertains to the treatment of women and the LGBTQ+ community. Now a senior at the University of Central Florida, she is double-majoring in Sociology and Biomedical Sciences with the goal of becoming a medical doctor all while serving as a fellow of our Critical Thinking Fellowship (CTF). In an interview for our blog, she talked about how she came to join the CTF, her thoughts on Islam, and why she thinks reformation is needed.

These are the opinions of Hanna Nour and not necessarily those of AHA Foundation.

AHA Foundation: Please tell us how your fellowship with CTF began. How did you first hear about CTF, why did you want to become a fellow, and what did you hope to achieve and learn?

Hanna Nour: When I left Islam, I discovered a community of dissenters of which I had no idea existed. One of the first ex-Muslims I found was Yasmine Mohammed, a prominent human rights advocate, and critic of Islam. Through Yasmine’s social media, I learned of Ayaan Hirsi Ali, AHA Foundation, and this fellowship with the CTF. This fellowship was incredibly enticing as it provided the opportunity to advocate for overlooked human rights violations.

As a Moroccan-American, I am dismayed by these violations because they frequently occur in my home country. Still, I am privileged enough to speak up on them without the same repercussions that individuals in those communities face. As a fellow, I hope to use my voice to bring awareness to these controversial issues such as women’s and LGBTQ+ rights in Islam and to learn from prominent activists in this field.

If I lived in my parents’ home country of Morocco, I would be subject to imprisonment for homosexual acts and blasphemy.

AHA Foundation: How did you become interested in women’s rights? Was there a time in your life when that interest presented itself?

Broadly, my interest in human rights in Islam and Islamic countries originates from personal reasons. If I had to describe myself briefly, I would say that I am a gay, ex-Muslim atheist, and a free speech activist. All of these descriptors are human rights that are stripped of citizens in Islamic theocracies. If I lived in my parents’ home country of Morocco, I would be subject to imprisonment for homosexual acts and blasphemy.

It is abhorrent that in the 21st century, someone like me would not live freely in about 20 Islamic theocracies. This needs to be addressed.

AHA Foundation: You became a CTF fellow in 2021 and hosted an online webinar last semester. What issue did you focus on and what speakers did you invite?

Hanna Nour: After reading Masih Alinejad’s The Wind in My Hair: My Fight for Freedom in Modern Iran, I knew that I wanted her to be a speaker for my CTF event. As a human rights advocate in Iran, Masih’s powerful story pulled me in, and I knew I wanted to do something to help. 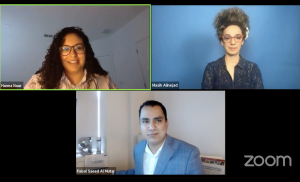 In this event, “Women as Agents of Change Against Forced Hijab,” Masih talked about the status of women’s rights in Iran through Zoom.

I chose to focus on women’s rights in Iran because I felt it was pertinent to speak up after learning of this mistreatment. Iranians risk their lives every day to speak up against the regime, while Western society fails to support them. As someone protected under the first amendment, I think it is crucial to use my voice to speak up.

AHA Foundation: You describe yourself as an ex-Muslim atheist. When did you make the decision to leave Islam and why? Did you receive any backlash for your choice?

But these substandard answers did not cut it for me, so I was always in a state of doubt, despite never vocalizing it. Also, my parents never aggressively pushed the religion onto me, but I still never chose it for myself. As a Muslim woman, I was told what to do, what to think, and never to question Islam—I was indoctrinated. These aspects, compounded with the notion that I knew I was gay, lessened my faith. However, I still held on to my identity as a Muslim because the thought of being able to leave Islam had never crossed my mind.

This changed in the fall of 2019 when I met my best friend, an ex-Jehovah’s Witness. Meeting someone who had successfully abandoned religion made me realize that leaving was possible. Also, as an avid reader, he introduced me to many books that drastically changed my views on the world, including Sapiens: A Brief History of Humankind by Dr. Yuval Noah Harari. Through this self-education, I was now melding my previous doubts of Islam and my newfound skepticism of organized religion. Eventually, knowing my ideals did not line up with Islam and realizing that I didn’t have to be a Muslim, I decided to apostatize.

As I posted online about my apostasy and comments that would be considered blasphemous, I was met with harsh statements from both strangers and acquaintances. However, luckily my close friends have been very supportive.

AHA Foundation: Do you think it’s important that Islam undergoes a reformation when it comes to the treatment of women in its society? Why?

Hanna Nour: I want to preface this by saying despite my disagreements regarding Islam, I will always defend the right of my Muslim family and friends to believe in whatever they want. At the same time, I also think it is vital to acknowledge the right not to believe.

I do believe that Islam should undergo a reformation when it comes to the treatment of women. The women’s rights violations that are ubiquitous in Islamic theocracies are something that we would never accept in Western societies. Yet, we continue to let them occur under the guise of religious acceptance. I also believe that Islam should undergo a reformation in the broad context of human rights. There is a theological foundation for the intolerance faced by apostates and the LGBT+ community. This foundation is used to justify harsh punishments or even executions. Therefore, I believe that it is essential to foster a discourse that will bring about reformation.

“We should be able to criticize any religion freely. Still, as a society, we have placed a security blanket over Islam. We should acknowledge those theological foundations that result in violence and inequality…”

AHA Foundation: In your opinion, what is the best way to bring about that reformation? Does it start up top, or with Muslim individuals speaking out?

Hanna Nour: I believe that Muslims speaking up from within is the best way to bring about reformation. I support organizations like Muslims For Progressive Values, which emphasize freedom of dissent, gender equality, reproductive justice, and LGBTQ+ inclusion—matters not included in orthodox Islam.

AHA Foundation: How important is this topic to you and why?

Hanna Nour: In Western society, we are in a situation where criticizing Islam is taboo. Often, criticisms of the Islamic ideology are conflated with discrimination against Muslims, leading to false claims of “Islamophobia.”

We should be able to criticize any religion freely. Still, as a society, we have placed a security blanket over Islam. We should acknowledge those theological foundations that result in violence and inequality and fight for reform of those beliefs that lead to these acts. Therefore, I believe it is critical to speak up about these injustices because staying silent would betray the values of enlightenment.

AHA Foundation: What advice do you have for students who are reading this blog and considering applying for the CTF fellowship?

Hanna Nour: Apply now! As a fellow, you will be able to work with renowned human rights activists to bring about change in the world.

During this fellowship, I have been privileged to meet multiple phenomenal human rights advocates, including Masih Alinejad, Faisal Saeed Al Mutar, and Yasmine Mohammed. These role models have opened my eyes to the world of possibilities and change that can be brought about through my actions.

I’d also like to express my deep gratitude to the AHA Foundation’s supporters! Your support equips us with the necessary tools to promote issues that are not discussed in mainstream media. Because of your help, we are one step closer to having liberty for all!

AHA Foundation: Hanna, thank you so much for taking time out of your day to speak with us.

Hanna Nour: Of course! Anything to help.

• Muhammad Fraser-Rahim Counters Extremism From Within