“Freedom is not controversial, it is universal.” AHA’s New Board Chairman Rosa Zeegers on Her Life, Career, and Hopes for AHA’s Future 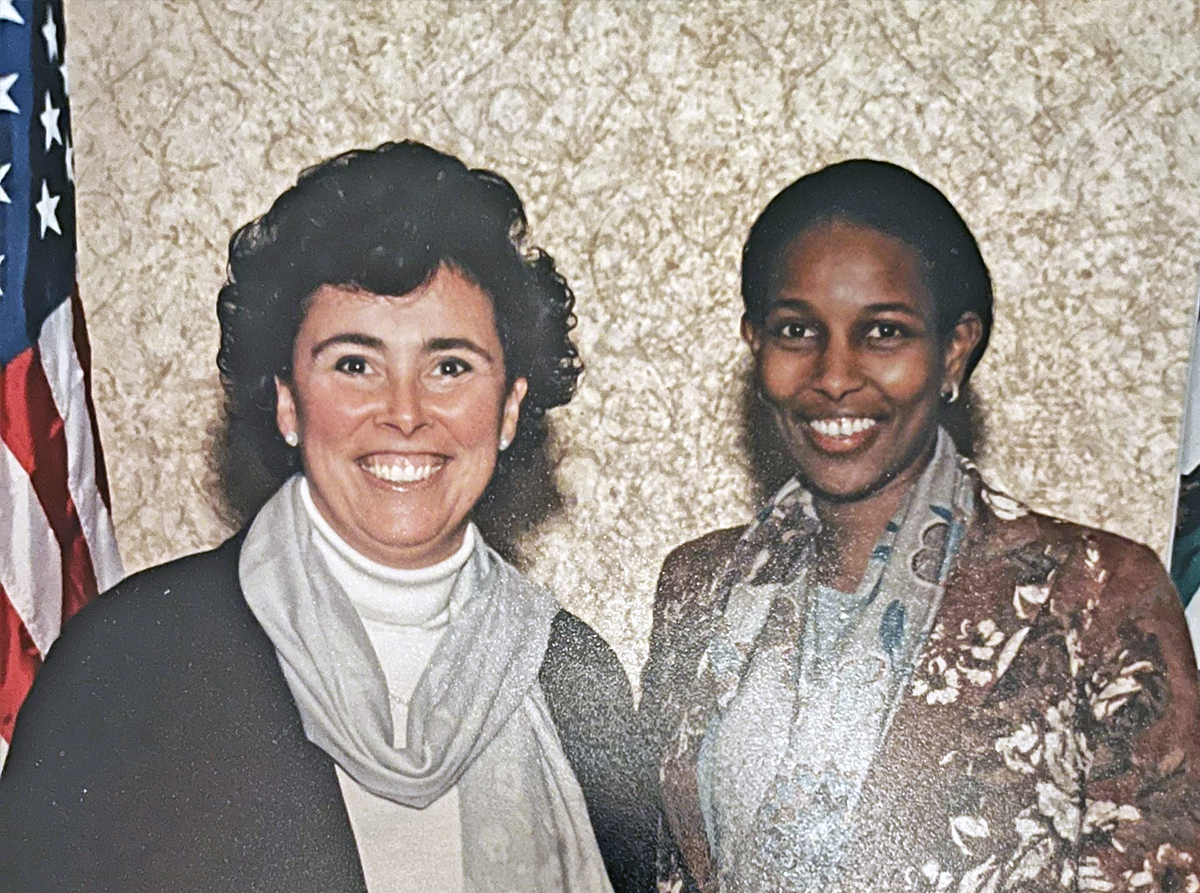 Rosa Zeegers has known our Founder Ayaan Hirsi Ali for over two decades. In that time, Rosa has been a staunch advocate of liberty for all alongside Ayaan and the AHA Foundation team. Rosa’s involvement with AHA stretches back to 2016. She has helped formulate our strategies and been an indispensable member of our Board—and as of October last year, she is our new Chairman of the Board. We interviewed her so you can get to know what drives her, and we’re sure you’ll agree that AHA’s future looks bright with Rosa leading the way.

AHA Foundation: Thank you for taking the time to speak with us, Rosa. To start, could you tell us a little about yourself—your background, your principles, and your long-standing friendship with Ayaan?

Rosa Zeegers: I am a Dutch Jew, born 15 years after the Holocaust ended. Almost my entire family was wiped out and the Jewish community was eradicated. Yet despite this horror, I grew up with the mantra of “never again.” That was the attitude of all the Dutch people. So, when antisemitism started to rear its head again, at the beginning of the new millennium, I was deeply disturbed.

It was actually my partner Evelyn, also a daughter of Dutch Holocaust survivors, who became active against it. She co-founded a non-profit in Holland, Network Against Antisemitism (NOA). It became clear very quickly, that—in contrast to the past—this time, antisemitism came predominantly from the left (masked as anti-Israelism) and from the fast-growing Islamic community. When 9/11 happened, and some of ‘our Muslims’ reacted not in shock but with glee, the debate around “Islam and the West” began in earnest in the Netherlands.

In that public debate, there was suddenly a new voice, from an unknown woman. Evelyn told me that she had heard this woman give “the first-ever intelligent analysis about Islam and the West.” That woman was Ayaan Hirsi Ali. Evelyn was determined to find her and ask her to become a member of NOA’s Advisory Board, which she did. Ever since Evelyn and I have been friends with Ayaan.

“[Antisemitism in Europe] was getting worse. We felt America was throwing us a lifeline—in the same way that it had saved our families from eradication during the Holocaust.”

While Evelyn is the activist between the two of us, I have had a corporate career. It brought us to the U.S. We took this opportunity not just for my career, but also because we couldn’t see the problem of rising antisemitism in Europe getting any better. In fact, it was getting worse. We felt America was throwing us a lifeline—in the same way that it had saved our families from eradication during the Holocaust.

We happened to emigrate around the same time to the U.S. as Ayaan started as a fellow at the American Enterprise Institute. We followed her journey onto the public stage and she followed our journeys—Evelyn’s as an activist and mine as a corporate executive. And, where possible, we helped each other—with introductions, publications, and by just being there for each other while we were all building our new lives in this welcoming country.

AHA Foundation: What about Ayaan’s work has most impressed you? 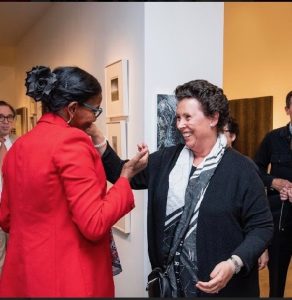 Rosa Zeegers: I could go on at length here, so I’ll keep it brief:

Her courage to say the things others don’t dare to.

AHA Foundation: Could you tell us about your involvement with AHA Foundation before becoming Chairman of the Board?

Rosa Zeegers: It started in 2016 when Ayaan asked me to write her own and the Foundation’s brand strategy. I worked on it with the stellar team that was in place at the time, many of whom are still here. When the strategy was done, we found a new Executive Director, George Zarubin, who has done an amazing job in implementing the strategy. We immediately saw that George was a very experienced Executive Director. He has turned the foundation around, placed it on a higher stable growth trajectory and was able to extend the work beyond its original scope significantly.

“I think our Board is a great team with a wonderful mix of diverse backgrounds and passions… I couldn’t hope for a more dedicated Board to work alongside.”

AHA Foundation: How have you and other members of AHA Board helped shape the foundation and Ayaan’s work over the years?

Rosa Zeegers: I think our Board is a great team with a wonderful mix of diverse backgrounds and passions. Some are more focused on the campus program, others are more passionate about Muslim integration, yet others feel passionate about the work we do on protecting minority women’s rights. I think the Board’s intellectual diversity and variety of backgrounds mean we have a huge pool of talent and skills to draw on. I couldn’t hope for a more dedicated Board to work alongside.

AHA Foundation: What AHA program work has been of most interest to you over the years? Which of AHA’s accomplishments have stood out to you the most and why?

Rosa Zeegers: I admire every piece of work the foundation does. It is all so necessary. One story sticks with me most of all. I’ve seen with my own eyes how the foundation rescued a young atheist, a lesbian woman from Egypt who was about to be married off. Through the foundation’s international contacts, she was smuggled out of the country, she was set up in a different country, and she was introduced to a potential employer, where she indeed found a job. Without AHA, who knows what would have become of her? 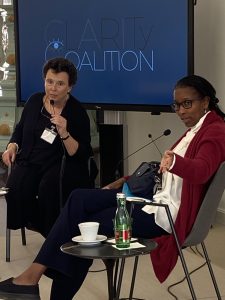 Rosa (left) in discussion with Ayaan at the CLARITy Coalition inaugural conference, October 2022.

I have witnessed the training given by AHA to law enforcement officials throughout this country about how things like female genital mutilation (FGM) and honor violence happen right in front of their eyes. It is truly eye-opening. I have seen the lobbying work done by AHA at the state level to pass laws criminalizing FGM and child/forced marriage, and I am so impressed by the tenacity with which the AHA team advocates for such laws.

Recently, I was humbled to be part of the first-ever CLARITy Coalition Conference in Salzburg, hosted by Ayaan and the foundation. It brought together some 50 thought leaders, Muslim and non-Muslim, from the U.S. and Europe to build a coalition and craft policy interventions against Islamism and to promote Muslim reform. It was an honor to be there at the beginning of something so important.

AHA Foundation: What made you decide to accept the role of Chairman? What do you want to accomplish in this role?

Rosa Zeegers: Never in a million years did I think I’d become the Chairman. I hold Chris DeMuth, my predecessor, in such high regard. He has led the foundation with such a steady hand. He is one of the most intelligent, seasoned leaders I know. I was so humbled when he called me and told me he was stepping down and was going to advise Ayaan and the Board to nominate me as his successor. I want to accomplish what he did—to keep growing the foundation as a beacon of liberty for all.

AHA Foundation: You became Chairman soon after we revamped our mission statement: “to preserve, protect, and promote Western freedoms and ideals.” What does this mission mean to you?

“We were so grateful to be in the U.S., this beacon of Western values, at a time when Europe seemed to have lost sight of those ideals almost completely.”

Rosa Zeegers: As I mentioned earlier, when Evelyn and I moved to the U.S., we did it partially because of a career opportunity for me and partially because of the rising antisemitism in Europe. When we came here, we finally understood the meaning of freedom of speech, and other Western freedoms and ideals. We were so grateful to be in the U.S., this beacon of Western values, at a time when Europe seemed to have lost sight of those ideals almost completely.

Over the last few years we have seen these freedoms and ideals erode here in the U.S. as well. For us, it is déjà vu. We know what it can lead to. We have seen it first hand in Europe. We need to fight with everything we have to preserve these ideals here in the U.S. and make sure they survive and flourish so that the rest of the world can see what it has lost.

AHA Foundation: What do you see as the biggest current threats to Western freedoms and ideals? And how do we oppose these?

Rosa Zeegers: I think the biggest threats are the ones AHA Foundation is fighting against. There is the danger posed by outdated traditions to women’s rights, one of the greatest achievements of the West. Our universities have lost sight of another of the West’s most precious ideals: freedom of speech. Our campus program empowers students to speak and think freely against illiberal ideologies at colleges. And, of course, there is Islamism, which is fundamentally incompatible with the freedoms and ideals of the West, and which AHA is at the forefront of opposing, primarily through our work with CLARITy Coalition.

AHA Foundation: Often, people who address these issues are smeared as ‘controversial’ or ‘right-wing.’ What would you say in response?

Rosa Zeegers: I would say: freedom can never be ‘controversial’ or ‘right-wing.’ Freedom is and should be universal. 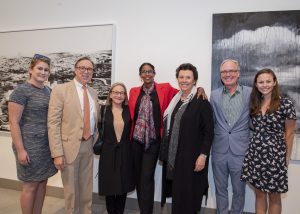 AHA Foundation: Finally, Is there anything you would like to say directly to our readers and supporters?

Rosa Zeegers: Thank you for being a supporter of the great work the foundation has done.

As we embark on this new era, with a broader mission, directly advocating for Western freedoms and ideals, we need your support more than ever. Please continue to fight the good fight with us, and invite your friends to do the same thing. Once more: freedom is not controversial, it is universal, and we should all stand together in its defense.