The Past, Present and Future of Islamic Reformation in the U.S. with Muhammad Fraser-Rahim 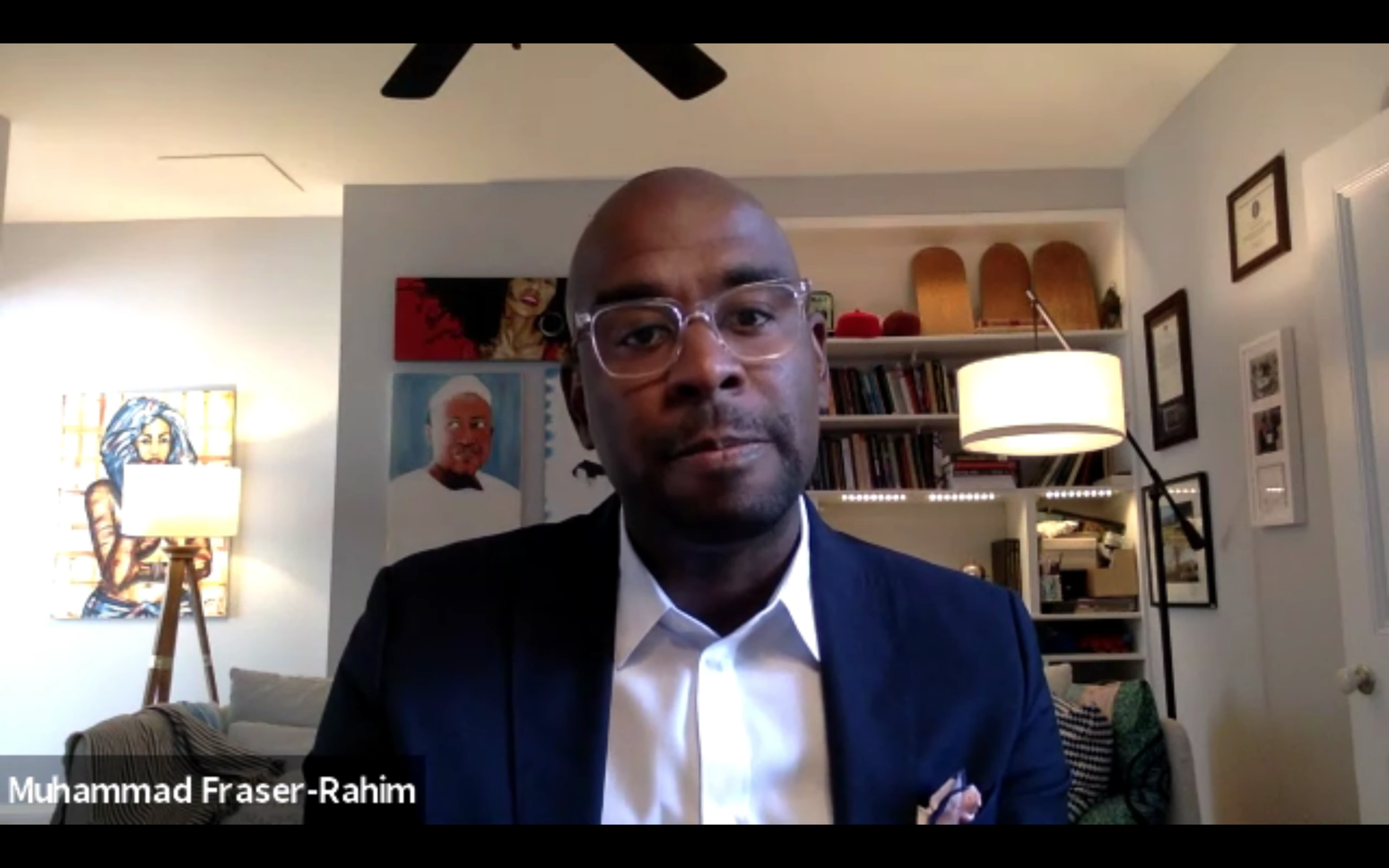 Muhammad Fraser-Rahim is the Executive Director of North America for Quilliam International. He is an expert on violent extremism issues and a scholar on Africa. With the recent release of his new book, Muslims: Imam W.D. Mohammed, Islamic Reform, and the Making of American Islam, we decided to catch up with him on his efforts to fend off Islamism and reform Islam in the U.S.

In our fight to combat dangerous ideologies, AHA Foundation has worked to build a coalition of Muslim reformers and ex-Muslims to counter Islamism and promote Islamic reform. One of our partners is Dr. Muhammad Fraser-Rahim, an African-American Muslim and a renowned expert on violent extremism. He recently published a book America’s Other Muslims: Imam W.D. Mohammed, Islamic Reform, and the Making of American Islam and spoke with our founder, Ayaan Hirsi Ali, during a webinar for our campus program. To build off of that webinar, we caught up with him to find out what sparked the extensive research behind the book and what makes it relevant in 2020.

AHA Foundation: You mention that Islam today is perceived either as “an Eastern religion with violent tendencies…that caused the devastation on 9/11” or “as an unknown faith that seems utterly foreign, immigrant and ‘other’ to ordinary America.” When you meet people with such views, do you try to change them?

Dr. Muhammad Fraser-Rahim: This is an uphill battle. Leading by example is critical. My work at Quilliam and my personal example shows that there are options.

Islamism is a cancer and it must be rooted out at its core. Many of my American and overseas Muslims are uncomfortable with this language, and us confronting this head-on.

AHA Foundation: How do you explain that we are now rarely debating the dangers of Islamism in the U.S. and around the world? Have we made good enough progress in recent years to justify decreasing our focus on it?

Fraser-Rahim: Islamism is a cancer and it must be rooted out at its core. Many of my American and overseas Muslims are uncomfortable with this language, and us confronting this head-on.

But just as much as there are ethnic issues that various communities must face—in the case of me personally, the issue of black on black crime—we must also look at our internal community issues even if they aren’t so pretty or comfortable to talk about. Ignoring it will see us be confronted with issues like the beheading in France or the rise of Islamist extremism on the continent of Africa.

AHA Foundation: In your newest book, America’s Other Muslims: Imam W.D. Mohammed, Islamic Reform, and the Making of American Islam, you explore the life and impact of the American Muslim Revivalist, Imam W.D. Mohammed. He became the leader of the Nation of Islam in 1975 and spearheaded a reform of Islam in the largest unified American Muslim community in the Western Hemisphere in the 20th century. What inspired you to write this book? How did it come together?

Fraser-Rahim: The book began from my doctoral dissertation and my academic and personal work on Islam in America. I studied under the late Dr. Sulaymn Nyang who was a scholar of Islam in America and he encouraged me to write and research topics that can help inform American and broader global societies on this community.

The book is vital in that it intersects in the topics of race, religion, Islamic reform, and violence prevention. It is a lifelong research and passion and will be informative for the laymen, policymakers, academics, and all walks of life.

AHA Foundation: In what ways did the practice of Islam change in America under W.D. Mohammed’s leadership and how are the results of that reform felt today?

Fraser-Rahim: W.D. Mohammed encouraged independent Islamic thinking free from the baggage of hurt, pain, cultural arrogance, or prejudice. He worked hard to stay true to the essence and spirit of the Quran as a student of Islam and a scholar.

This is important as he was cultivating and training his students which included men, women, and young adults. In many ways, he was challenging the status quo but also adhering to the truest ideals of Islam in offering fresh and revivalist framings of Islam but at the same time going back to the simplicity of Islam as established in Arabia over 1400 years ago.

For the Muslim world today, getting back to the basics of good character, good morals and good manners are just as important if not more important than individuals who memorize religious text and aren’t able to apply them to be kind and to treat all people well.

AHA Foundation: In your book, you mention that W.D. Mohammed taught his followers that words in the Quran have a social, spiritual, and political context, and they need to be viewed through the lens of time and geography. This approach is recognized as a core pillar of any reformed religion. Why is it so dangerous and difficult to spread this concept in Islam today?

Fraser-Rahim: Power, control, arrogance, and pride! These are issues that the Muslim world is struggling with and one in which W.D. Mohammed encouraged his followers to constantly seek to polish and work on.

For the Muslim world today, getting back to the basics of good character, good morals and good manners are just as important if not more important than individuals who memorize religious text and aren’t able to apply them to be kind and to treat all people well. The Muslim world could learn so much from W.D. Mohammed and others like him who made it a life mission in this arena.

AHA Foundation: Also, worth noting to our readers is that W.D. Mohammad encouraged his followers not be susceptible to influences and pressures from other schools of Islam, especially from overseas. Contrary to that belief, at one point he had a close relationship with Saudi Arabia and in 1994, he cut those ties and chose independence over financial security. Was this move supported by his community or were there doubts of his judgment?

Fraser-Rahim: W.D. Mohammed made sure he was not controlled or bought by overseas or foreign Muslims. In a world where money is very important to spreading the message of Islam and being able to move messages of a moderate Islam forward, it could have been easy for him to be on the payroll of various organizations and groups.

The community supported him because they saw his idea as something vital for the community’s progress as many in America were aware of other Muslims, including African-American Muslims outside of the W.D. Mohammed community, and they became a victim of the financial and ideological indoctrination. W.D. Mohammed had to be courageous and received push back, but in modern times, his vision has proven effective.

• Muhammad Fraser-Rahim Counters Extremism From Within

AHA Foundation: A lot of your own work focuses on the reformation of Islam. What does it mean to be a Muslim reformer today? How do you see the future of Islamic reformation?

Fraser-Rahim: My work is to lead and to show by my life’s calling and mission of A Third Way—the political philosophy that bipartisan balance is crucial for success. A lot of people talk about all the beauty and wonders of Islam, but model behavior is shown when your work is seen as aiding not just Muslims but the human family. That is my work.

Women and girls have the same equal rights as anyone else. Islamic reform is agnostic of gender. We are in the business of supporting change and fostering dialogue and inclusion.

AHA Foundation: How can Muslims and ex-Muslims work together to assist the reform? Is the support of those who have never been affiliated with Islam also important and if yes, how can they provide help?

Fraser-Rahim: Yes, we are all humans. Ex-Muslims have their roles, and Muslim reformers and ordinary humans do as well. At times alignment can take place in a seamless way, and at other times groups have their individuals end states. We are open to working with all who share our desire to promote pluralism, champion human rights, and to be respectful to others even if we don’t agree.

Fraser-Rahim: Women and girls have the same equal rights as anyone else. Islamic reform is agnostic of gender. We are in the business of supporting change and fostering dialogue and inclusion.

AHA Foundation: How can fellows at AHA Foundation campus program and our supporters help with combating extremist ideologies? And how can they explain the American School of Islam effectively when the Muslim Student Associations on campus state that only they can speak on behalf of other Muslims?

Fraser-Rahim: Check out our work on our website. Islam is diverse. There is no single Muslim story and encouraging and asking and pushing for diversity of thought is also part of the historical and rich Islamic tradition. Having differences of opinion is paramount for change and also fostering opportunities for real learning.

AHA Foundation: Muhammad, thank you so much for talking with us today.