Why Eradicating Female Genital Mutilation in the U.S. Must Be a Bipartisan Effort 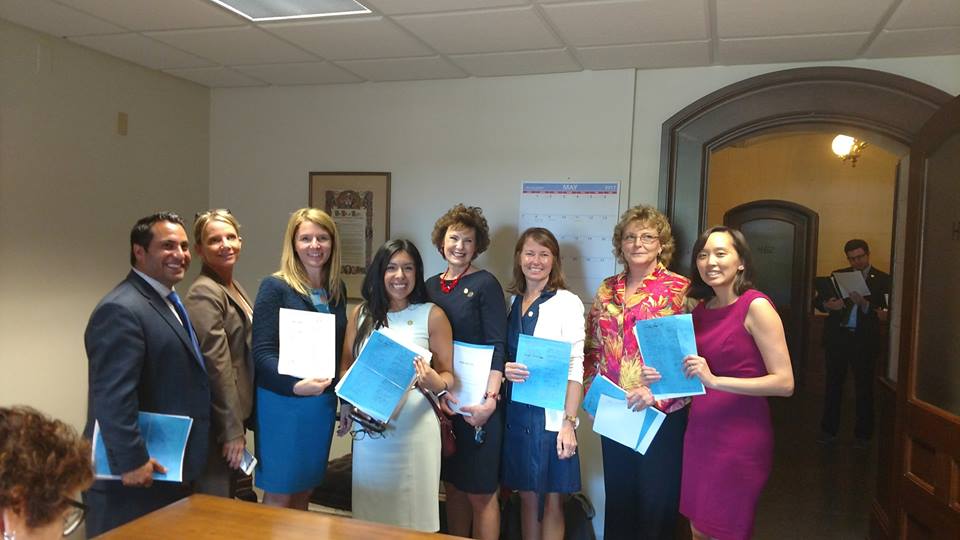 Representative Chang with the bipartisan group that worked to pass Michigan’s anti-FGM legislation.

The AHA Foundation is unfortunately witnessing a trend where female genital mutilation (FGM) legislation is being stalled from passage because the topic is becoming increasingly partisan. When faced with this issue and discussing how to address it, legislators from the two parties become bogged down with arguments that take the conversation away from the real need – protecting girls at risk.  This slows down the process of enacting legislation that can save thousands of girls in the U.S. who are at risk of having their genitals cut.

At the AHA Foundation, we believe that FGM is an urgent human rights issue. Time is of the essence. To eradicate this dangerous practice in the U.S., we must approach it in a bipartisan way. We spoke with Representative Stephanie Chang (D-MI) to hear about how her state of Michigan swiftly passed the most comprehensive FGM legislation in the country, through an entirely bipartisan effort.

AHA Foundation: When Michigan put forward their FGM legislation, it was a strong bipartisan effort. Why was this important?

“Ultimately the bipartisan nature of the bills helped ensure that the bills pass nearly unanimously.”

Representative Chang: I am proud of our bipartisan effort to develop and pass female genital mutilation legislation in Michigan. It was absolutely important to have a bipartisan effort. I worked in partnership with Rep. Michele Hoitenga, Democratic policy staff, and Republican policy staff in a collaborative way to pass these bills and ultimately the bipartisan nature of the bills helped ensure that the bills pass nearly unanimously.

AHA Foundation: How did you achieve bipartisan support? What made the legislation bipartisan?

Representative Chang: The legislation was bipartisan because representatives on both sides of the aisle were shocked by the fact that female genital mutilation was taking place in Michigan. As we learned more about what happened, we all understood how important it was to address this human rights issue immediately. We achieved bipartisan support for the bills through numerous conversations to ensure that we carefully vetted all the details of the bills and through talking to fellow legislators about the issue.

“Representatives on both sides of the aisle were shocked by the fact that female genital mutilation was taking place in Michigan.”

It was very important to have Amanda Parker from AHA Foundation give her strong expert testimony in the House Committee on Law and Justice about female genital mutilation and in support of the legislation. She also was part of our work group and gave significant feedback to strengthen our bill package before we introduced the bills. Her testimony helped shape the discussion and helped reiterate how the issue is not a partisan one.

AHA Foundation: What impact did the news about FGM having allegedly been performed on as many as 100 girls by a doctor in Michigan have on the process of initiating and enacting FGM legislation in your state?

Representative Chang: I’ll be honest – I had no idea female genital mutilation was occurring in the United States. When I first read the news about the female genital mutilation done in Michigan to the two girls from Minnesota, I was shocked and horrified that this inhumane practice was being done here. My friend Dr. Mohamed Arsiwala called me and told me how important this issue is and how he wanted me to work on legislation. I got to work right away to submit a bill request and begin the conversation to address the issue.

AHA Foundation: Sometimes FGM legislation can unfortunately become polarized. Why is this not a partisan issue?

Representative Chang: Female genital mutilation is not a partisan issue because most everyone in Michigan realized that FGM is recognized as a human rights issue by the United Nations and is something that we need to prevent from happening here. It is an issue for women and girls and an issue of public health as well.

AHA Foundation: What kind of reaction did you receive from the public when the bills were suggested? What about communities with girls at risk?

Representative Chang: When we first started working on the bills and introduced the bills, we received positive reactions from many people – women’s groups, the medical community, and more.

AHA Foundation: The Michigan legislation is very comprehensive and includes for many key provisions that are not seen in many other states. Was there debate on any of them?

“Female genital mutilation is not a partisan issue because most everyone in Michigan realized that FGM is recognized as a human rights issue by the United Nations and is something that we need to prevent from happening here.”

Representative Chang: We are proud of how strong our package of bills were here in Michigan. There was not any real public debate or opposition. We first started with a handful of bills related to creating the felony and the public education bill, and the more we talked, we realized other bills were necessary to address other aspects of female genital mutilation, such as the statute of limitations on both the criminal and civil sides. The bill package ended up being 8 bills and a resolution.

AHA Foundation: In the Michigan state legislation, there is an education and outreach provision. Could you explain more about this and what is happening in the state to implement this provision?

Representative Chang: We passed a bill (now Public Act 77 of 2017) that requires our state Department of Health and Human Services (DHHS) to develop an education and outreach program. The program needs to be developed in consultation with women’s health organizations, teachers, local health departments, health care providers, and other state agencies. I have connected DHHS to several lawyers who are local experts on female genital mutilation and we are hoping that through that collaboration, DHHS will develop a strong education and outreach program.

AHA Foundation: How will you evaluate the legislation in the future?

Representative Chang: We will be able to evaluate the success of our legislation through any statistics related to arrests and prosecution of female genital mutilation, how many people are reached by the education and outreach programs, and general public awareness. I am hopeful that our legislation will deter female genital mutilation from happening here in Michigan.

“To legislators in other states – I encourage you to keep working hard on the legislation, to have conversations with colleagues on both sides of the aisle, and to enlist groups like AHA Foundation to speak in support during the committee process.”

AHA Foundation: What would you recommend to other state legislators on passing or strengthening FGM legislation in their state?

Representative Chang: To legislators in other states – I encourage you to keep working hard on the legislation, to have conversations with colleagues on both sides of the aisle, and to enlist groups like AHA Foundation to speak in support during the committee process. Female genital mutilation is an important human rights issue to address. If you are facing obstacles in your legislative process, keep pushing forward and do not give up!

Watch Rep. Chang in a past AHA Foundation webinar here.

The opinions stated above are those of Representative Chang and do not necessarily represent the views of the AHA Foundation.