“I never thought I’d be working to end child marriage right here in the U.S.” 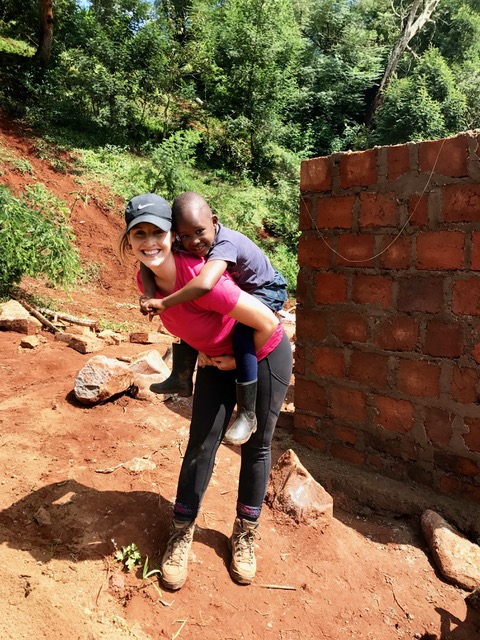 AHA Foundations Brooke Bumgarner working with local communities in Tanzania. It was there that she decided to focus her career on fighting child marriage.

Seeing the effects of child marriage first-hand early in her career, AHA Foundation’s Brooke Bumgarner found a calling in fighting this human rights violation. But when she began her Masters program with a focus on child marriage at George Washington University, she learned this problem was rampant within her home country, too.

I will always remember the first time I learned that young girls were being married, often against their will, to older men. In fact, I remember it as if it was yesterday.

I was in Tanzania, working with a nonprofit assisting families that lived in rural poverty. Among the many programs the organization financed, however, one stood out to me. Women had joined together to create a Village Community Banking (VICOBA) program that would empower them to start small businesses like growing and selling food from their gardens, or raising chickens and pigs as part of a livestock project.

There I met young girls, and many older women, who had been married before they could finish their education, and who had become young mothers while they themselves were still children. As a consequence, with limited education and marketable skills, they were now fighting for their families survival and attempting to increase their income security so the cycle of poverty did not continue.

I couldn’t stop thinking that if I were born here, this could have likely been my destiny.

Here I was, proud that I had earned my Bachelors degree and excited about starting my career, while at the same time realizing that millions of girls throughout the world would never be afforded the same opportunities as me. They were forced to grow up overnight; their futures stolen from them. I couldn’t stop thinking that if I were born here, this could have likely been my destiny. It didn’t seem fair, and little did I know, the consequences went far beyond what’s “fair.”

Ever since, I’ve known what I was meant to do—but I never thought I’d be working to end child marriage right here in the U.S., in my own backyard.

Initially, when most people learn about child marriage, they think that this is something that happens elsewhere in the world, but definitely not here in the U.S. And, I don’t blame them, or YOU, if that’s what you previously believed, because at some point, I was there too. The truth is, however, girls are not just vulnerable to child and forced marriage abroad, but also right here in our hometowns.

In 2019, I went back to school to get my Master’s degree in International Development, and chose to specialize in the issue of child marriage. What I soon learned about girls’ ability to escape child, early and forced marriages, especially in the U.S., appalled me.

…what’s even more appalling is the fact that almost nothing has changed since I first learned of child marriage in 2017.

Did you know that girls in the U.S. are married LEGALLY under the age of 18 every day, but they are unable to file for divorce, in most states, until after they turn 18? And tragically child marriage annulments are incredibly uncommon in the U.S., and there are very few organizations like ours that are actively calling on legislators to better protect our girls from this human rights abuse. 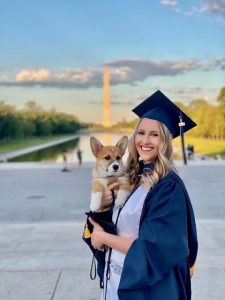 Brooke received her Masters degree in 2021 and devoted her career to fighting to end child marriage and keep girls in school.

And, what’s even more appalling is the fact that almost nothing has changed since I first learned of child marriage in 2017.

In fact, in 2017, child marriage was still legal in all 50 states. And, since then, only five states have completely outlawed marriages under the age of 18. Delaware and New Jersey became the first in 2018, followed by Pennsylvania and Minnesota in 2020 and Rhode Island just this month!

…one child marriage survivor finished telling her story by saying, ‘I just wonder where all the girls [that were married as children] are now and what’s happened to them…’

Thanks to our supporters, however, AHA Foundation is fighting tirelessly for change in the existing 45 states that currently fail to protect girls from child and forced marriage. Our main focus is on opening the eyes of legislators to this human rights abuse; many are both unaware that child marriage is happening in their states and unaware of the consequences that follow child brides for the rest of their lives.

In my work at AHA Foundation, I meet child marriage survivors who work tirelessly with us to make sure that what happened to them, does not happen to other girls. In a recent call with Michigan legislators, one child marriage survivor finished telling her story by saying, “I just wonder where all the girls [that were married as children] are now and what’s happened to them…”

Right now we are working in nearly a dozen states to pass bills that will make sure no child can be married before they are an adult. You have the opportunity and power to protect girls from child marriage.

Thanks to AHA Foundation’s Spring Matching campaign, you can double your gift and impact in the fight against child marriage and other forms of gender-based violence.

Years of inaction has negatively impacted countless girls, and left thousands more at risk. Let’s make sure they aren’t left behind any longer.