“From Africa to the Middle East to the U.S., I have met many women and girls who understand that limits on their educational and employment opportunities, a denial of their right to choose their spouse, or the violence and abuse they face simply for being female is wrong.”

Earlier this month I stepped down as the Executive Director of the AHA Foundation so that I can devote more time to my studies and writing. Looking back at the past two years, I am proud of the many victories against honor violence we won with your help, some of which have been years in the making.

Following a twenty year career, the most rewarding opportunities for me are those that involved making a positive difference in the lives of women and girls. Increasing public awareness about the inequalities and dangers these women and girls face, and witnessing how that message moved supporters like you to take action has been a personal victory that has snowballed into a movement during my two years at the AHA Foundation.

I think about the powerful protest I joined in New York City where survivors and activists demanded an end to forced marriage or speaking at a meeting in Washington D.C. with various government agencies about what can be done to prevent female genital mutilation in the U.S. I am also inspired by the survivors of honor violence and forced marriage who have shared with us the difference the AHA Foundation has made in their lives and why our work is so important to them and other women and girls who face similar situations.

2015 has been undoubtedly one of the most successful years for the AHA Foundation since its inception in 2007. We launched a textline for women and girls experiencing honor violence and forced marriage who can now seek professional help 24-7. We also created an online training program for frontline service providers. Both initiatives were born out of the generous support we received from our donors. I think about one of our major supporters who said to me, “I understand the importance of addressing honor violence in the U.S. Not to do so undermines our democracy.”

For those of you who have been following Ayaan’s work, she remains a staunch champion for the rights of women and girls coming from societies where gender discrimination is the norm. Based on her own experience of finding freedom in the West, she continues to fight for other women and girls to experience this freedom as well. I am humbled by Ayaan, who courageously stood up for women’s rights despite being shunned by her community and receiving death threats. I don’t know many women who would be willing to pay such a high price for speaking out. 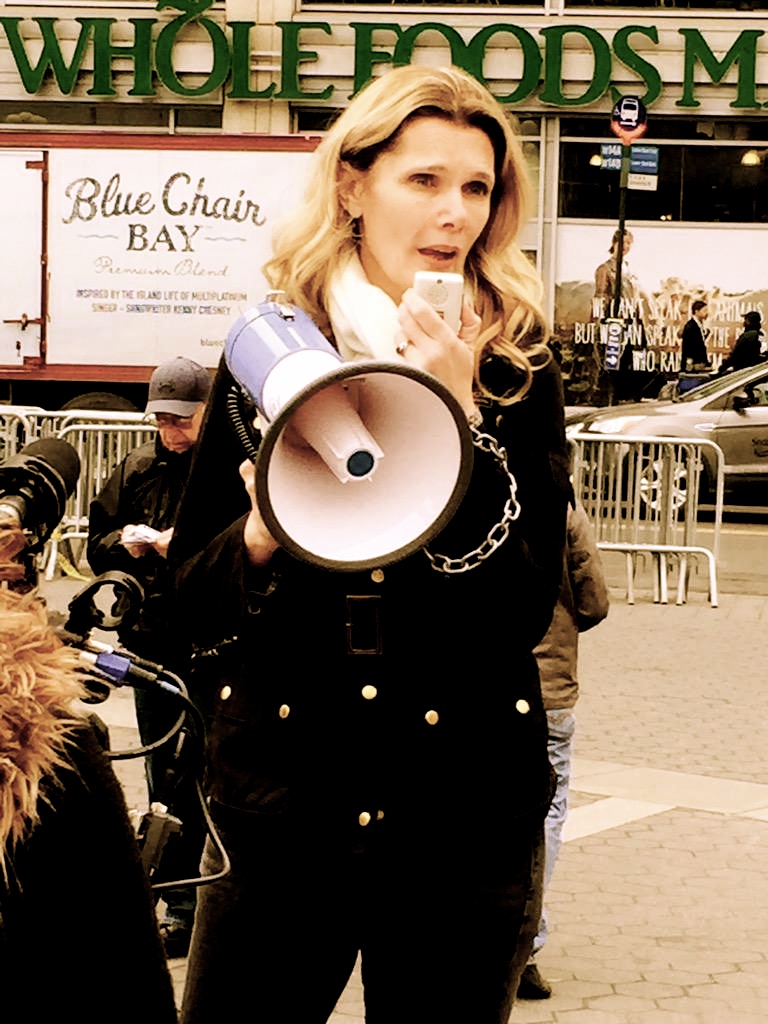 Speaking at a rally for our sister organization, Unchained At Last

I often say there are many more “Ayaans” out there, women seeking to bring positive change to their families and communities, if they are given the chance to pursue opportunities to achieve their aspirations. From Africa to the Middle East to the U.S., I have met many women and girls who understand that limits on their educational and employment opportunities, a denial of their right to choose their spouse, or the violence and abuse they face simply for being female is wrong.

As we increasingly grapple with issues of global security and political unrest, it remains of continued importance that we give immigrant and refugee women and girls the opportunity to live in a society that offers them equitable opportunities, and protects them from violence and abuse through rule of law. As we see in our work through the AHA Foundation, when empowered to live to their full potential, women become agents of change, shaping their families and communities in ways that further strengthen our society. I cannot think of a more effective way of countering extremism, promoting dialogue and driving global change and understanding.

I will continue to be involved as a Senior Advisor and leave the management of the AHA Foundation with Amanda Parker, who will take over as Interim Executive Director. Amanda is a passionate advocate for women and girls’ rights and she was part of the team that founded the AHA Foundation. I am confident she will be exceptional in her new role.

We very much look forward to 2016 as an even more successful year for the AHA Foundation. We look forward to working with you to achieve more victories against honor violence. Thank you for your continued support.

After one year at the AHA Foundation, Stephanie reflects on what it takes to fight honor violence

Gender equality is a powerful weapon against radical extremism

On the importance of the Westat report for the Department of Justice: “Finally in the United States there is recognition that honor violence is taking place in our country”

Child marriages in the US must be stopped