A Year of Amazing Impact, All Thanks To You: AHA Foundation’s 2022 Achievements

2022 has been a dizzying and sometimes scary year for all of us. From the continuing effects of the pandemic to the war in Ukraine and economic turmoil, sometimes it feels impossible that any one person can make a difference. But you, our readers and supporters, prove such pessimism wrong.

In 2022, we revamped our mission statement: “to preserve, protect, and promote Western freedoms and ideals” (more on this from our Executive Director’s blog here) and celebrated 15 years of incredible impact (watch our 15th anniversary celebration video above). And with you supporting us and cheering us on, we accomplished so much in 2022. We want to share with you a brief list of some of our biggest accomplishments this year to show you that you truly do make a difference.

AHA Foundation, together with activists, academics, ex-Muslims, and Muslim reformers, launched the CLARITy Coalition (Champions for Liberty Against the Reality of Islamist Tyranny) and sponsored a “Going on Offense” Conference in Salzburg, Austria with over 50 leading activists in the fight against Islamist extremism. 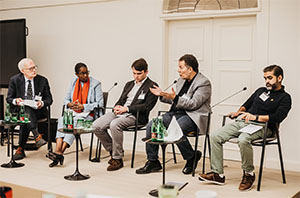 AHA testified in support of a ban on FGM in the District of Columbia, which might pass this year. We saw the Violence Against Women Act (VAWA) reauthorized, adding protections from FGM and forced marriage. 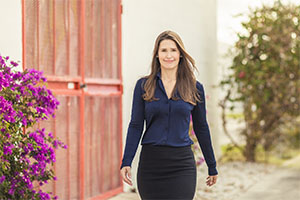 AHA Senior Director Amanda Parker, a veteran of the fight against FGM in the U.S. (read more below). 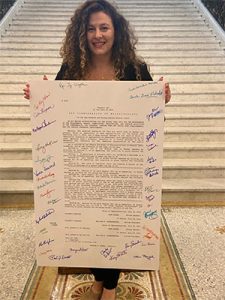 AHA’s Director of Policy and Women’s Programs Michele Hanash celebrates the culmination of years of activism with the passage of a bill banning child marriage in Massachusetts, 2022 (read more below).

Increased Direct Aid for Women and Girls at Risk

This year, we helped 34 individuals who reached out via email to our helpline.

The American Bar Association hosted our webinar on their continuing education platform and we conducted FGM training with the American Public Health Association. We successfully trained 150 professionals on FGM in Chicago and provided FGM trainings in Orange County, California. 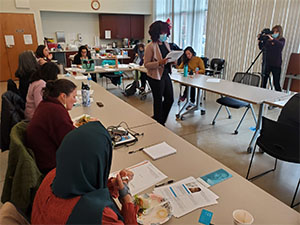 Project coordinator of AHA’s Chicago anti-FGM training program Oluwadamilola Alabi (standing) on the front lines of the fight against FGM (read more below).

Ayaan spoke at 4 webinars for students from Yale, the University of Central Florida, Florida State and other universities for AHA’s Critical Thinking Fellowship campus program. She also taught a class at the University of Austin, Texas’ (UATX) Forbidden Courses Summer Program, titled Critical Thinking and Freedom of Expression, in June. Our campus program fellows at Fordham, Purdue, and others, held virtual and in-person events with major thinkers, like Peter Boghossian. 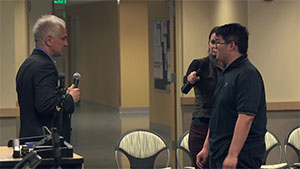 This year, Ayaan published dozens of articles in London-based publication UnHerd and continued to write for The Spectator World as a contributing editor. She continued her podcast, The Ayaan Hirsi Ali Podcast, while appearing on several other podcasts. In 2022, Ayaan was at the forefront of the media response to the Salman Rushdie attack with an OpEd in The Washington Post. 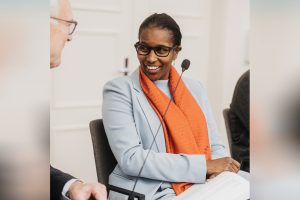 Thank you all for everything that you do—without you, none of our work would have been possible. From everyone at AHA Foundation, we wish you a prosperous and happy 2023.